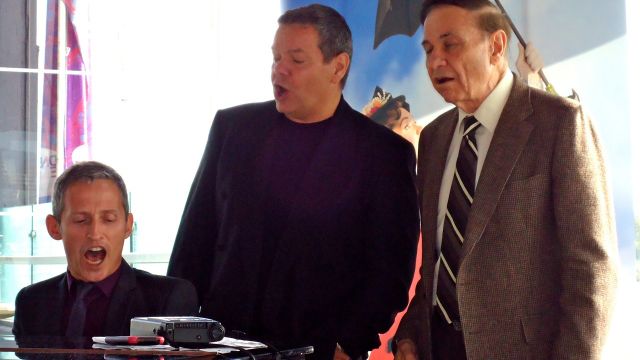 The legendary composer of Mary Poppins - RICHARD M SHERMAN - has given a performance with the two young composers George Stiles and Anthony Drew who updated the Disney Musical.

Their singing can be heard EXCLUSIVELY at the bottom of this article.

In the 20 minute documentary Richard M Sherman explains how Walt Disney approached him and his brother Robert Sherman to write and compose the musical.

We then hear how George and Anthony took on the commission to expand and adapt the musical score from the film to make the hit musical produced by Disney and Cameron Mackintosh.

The feature includes wonderful singing and an insight into how many of the songs including Supercalifragisticexpialidocious were originally written and adapted for the stage show which opens in Melbourne this week.