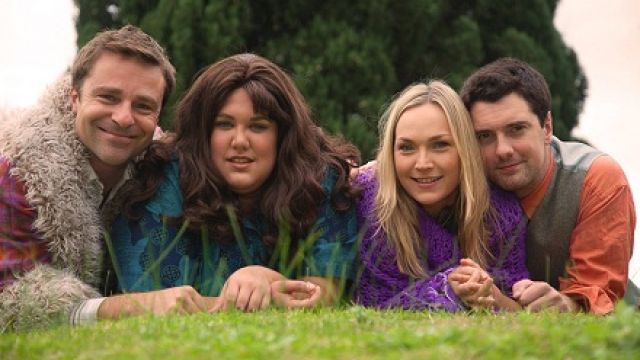 Due to huge demand, there will be an additional performance of flowerchildren on Tuesday September 6, at 8pm.

Magnormos will present the world premiere of flowerchildren, the new musical about the turbulent private lives of The Mamas and Papas between their spectacular rise to fame in 1966 and their tragic demise only four years later, in 1970.

Penned by AFI winning writer, Peter Fitzpatrick (Hotel Sorrento), the musical explores the distrust, dangerous passions, and unhealthy co-dependencies behind this group who sold 100 million records worldwide and left a legacy of timeless hits such as Monday Monday, Creeque Alley, Words of Love, and the iconic California Dreamin.

The powerhouse vocal foursome is made up of Helpmann Award winner, Matt Hetherington, who most recently appeared in the MTC production Next to Normal and whose extensive list of theatrical credits includes Sugar and The Full Monty.   As Papa John, Matt will be joined byLaura Fitzpatrick (Fiddler On The Roof, Title of Show) as Mama Michelle, Dan Humphris(We Will Rock You) as Papa Denny and Casey Donovan taking on the role of Mama Cass.  Casey was lauded for her role in the critically acclaimed koori motown musical, The Sapphires which toured nationally and internationally in 2010.

“Casting a role like Cass is a great challenge as people today still have such a firm vision of who Cass Elliot was, and her extraordinary, unique sound. As per the lyrics of Casey's recent single having someone as ‘big, beautiful and sexy’ as Casey Donovan to present her story – coupled with her incredible knockout voice – it's a perfect match!,” says Artistic Director Aaron Joyner.

CASEY DONOVAN - MAMA CASS
Casey Donovan is the youngest Australian Idol winner, winning at the age of 16. She is a multi- award winner and nominee, including an ARIA No #1 Award for Listen With Your Heart and Deadly Awards for Best Album, Best Single and Most Promising New Talent. Casey has won national and international praise from the critics in the 2010 season of THE SAPPHIRES, presented by Company B Belvoir and Black Swan State Theatre Company, including the Best Supporting Actress award at the 4th Deagu International Music Festival Awards. “The best performance comes from Casey Donovan, built on the lines of Mama Cass… extraordinary poignancy and power’ – The Telegraph (London).

LAURA FITZPATRICK - MAMA MICHELLE
Laura Fitzpatrick began performing professionally alongside Chaim Topol as ‘Chava’ in FIDDLER ON THE ROOF at the Regent Theatre. Eight years later, she was lucky enough to work with Topol again in Fiddler, this time as his middle daughter ‘Hodel’. Laura also performed the role of ‘Eliza Doolittle’ in MY FAIR LADY at Melbourne’s Comedy Theatre, and before that played ‘Serena Katz’ in the Australasian tour of FAME - THE MUSICAL. Laura travelled to China to appear as a soloist in THE MUSIC OF ANDREW LLOYD WEBBER concert starring Elaine Paige. Other credits include THE FULL MONTY, I SING, THE LAST FIVE YEARS, and with Magnormos THE THING ABOUT MEN, OZMADE MUSICALS, MERRILY WE ROLL ALONG and the critically acclaimed Australian premiere of [TITLE OF SHOW] which she performed for the Broadway writers and director in a special performance added to the season.

DAN HUMPHRIS - PAPA DENNY
Most recently performing the challenging role of Hapgood in the Australian premiere of Stephen Sondheim's ANYONE CAN WHISTLE at the Melbourne Recital Centre, Dan Humphris made his professional debut in WE WILL ROCK YOU, going on to secure the role of Whispering Jack for the Australian and Japanese tours. In 2007, after a season of FLORA THE RED MENACE for Magnormos, Dan made a move to the U.S. where he took roles on a number of the newest and biggest cruise-ships in the world. Performance credits include SUNDAY IN THE PARK WITH GEORGE (George), CHILDREN OF EDEN (Father) and IS THERE LIFE AFTER HIGH SCHOOL.