Gallipoli Musical to Premiere in April 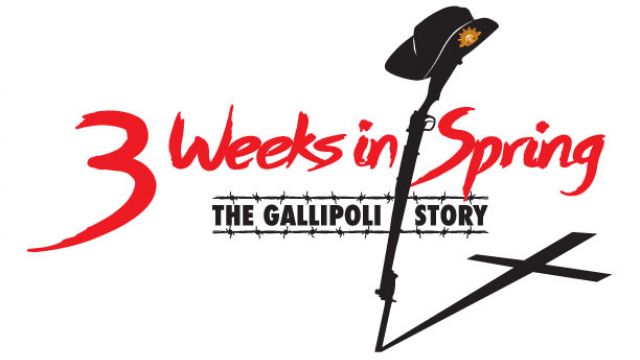 Over 60 performers will appear in the World Premiere of a new musical about the origins of the ANZAC legend at the Joan Sutherland Performing Arts Centre, Penrith, NSW, in April 2011.

3 Weeks in Spring: The Gallipoli  Story  by Ian Gerrard (Book & Lyrics) and Russell Tredinnick (Music), is the story of the ANZAC soldiers and the loved ones they left behind – retold for modern audiences of all generations.

3 Weeks in Spring: The Gallipoli  Story has been selected to feature in the New Musicals Australia showcase of new works at Parramatta’s Riverside Theatre on 16 March, 2011. It is also receiving its full-length premiere, in concert version, at the Joan Sutherland Performing Arts Centre, Penrith, from 7-10 April, 2011.

‘We’re essentially telling two stories,’ says Ian Gerrard, who came up with the idea for the musical five years ago. ‘Firstly, there’s the story of the origins of the ANZAC legend, as seen through the eyes of Charles Bean, the journalist who was embedded with the troops at Gallipoli and who acts as the musical’s narrator.

‘We’re looking at the journey these ordinary blokes who did extraordinary things in impossible circumstances underwent at Gallipoli. And we’re also looking at how the war impacted on their families, and on the likes of the nurses who cared for the injured. In the process, we address all the classic ANZAC elements ­–landing at the wrong place, the blame attached to Churchill, etc – and show why the story’s universal themes of hope and despair, idealism and cynicism, love and loss still have so much resonance with Australians today.

‘Then there’s the second story, which is really the hook of the show. It’s the story of Simpson and his donkey; the story of an Englishman who, by quirk of fate, found himself with the Aussie troops at Gallipoli, a rebel who backed his own judgement, nearly got court-martialled as a result, but who worked wonders for morale in the trenches, becoming known as “the bloke with the donk”.

‘Despite his nationality, Simpson has come to epitomise Aussie larrikinism and the ANZAC spirit. The show’s timeline ­– and its title ­– corresponds with the three weeks Simpson was at Gallipoli, where he’s said to have saved some 300 men before being brought down by a burst of machine-gun fire.’

Composer Russell Tredinnick, who draws on a variety of musical genres in the score, believes it is a ‘musical for all Australians, of all ages’, adding that the ultimate goal is for 3 Weeks in Spring: The Gallipoli  Story to become the centrepiece of the 2015 ANZAC Day Centenary Commemorations.

National interest in the ANZAC story has never been stronger and will only increase as 2015 gets closer.