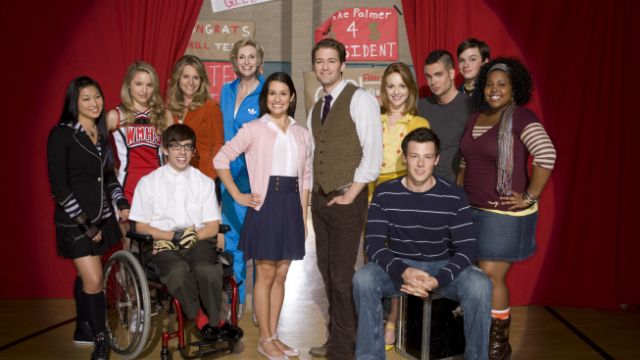 While the show itself has received great ratings and Golden Globe nominations, its ‘spin off’ effect is particularly noticeable, with the show selling out live performances at Radio City Music Hall and guest appearing at iconic American institutions such as the Superbowl and Oprah.
Recently the Sydney Morning Herald ran an article reporting that Sydney Musical Theatre companies were noticing bigger turnouts at auditions for musicals. This appears to be part of a world wide trend.
Earlier this year London’s West End showed an 86% increase on ticket sales ‘year on year’ for long running shows such as Sister Act, Wicked, Priscilla Queen of the Desert, Oliver and Legally Blonde, a trend that several commentators attributed to the success of Glee.
More obvious was Glee’s impact on this year’s Edinburgh Fringe, which included shows entitled The West End Glee Club, The Singalong Glee Club and Showstopper: The Improvised Musical, all with Glee inspired themes and reporting sell-out crowds at the festival.
Glee albums are enjoying lengthy periods at the top of Apple’s chart of iTune’s Internet downloads.
In the US, the National Association for Music Education recently questioned choir teachers as to whether Glee has had an influence on their music programs. Nearly half of the choral teachers responded that student participation in choirs had increased and that students had asked to perform songs from the show.
Music Theatre International, which has had huge licencing success with High School Musical, announced earlier this year that they were in negotiations with Fox to bring Glee to the stage, with MTI chairman Freddie Gershon saying, “We think it’s a natural.” Though the discussions have been denied by Fox, the excitement generated about this possibility is a sign of the popularity of the show in musical theatre circles – a popularity fuelled by the frequent appearances of big musical theatre stars such as Idina Menzel, Kristin Chenowith and Neil Patrick Harris.
Bringing stage stars into the mainstream has helped familiarize the general public with the musical theatre industry. Chris Bedding, actor and director commented, “I am not a massive fan of Glee, though I don't hate it. I think it has given some profile to the triple threat stream of the performing arts. This gives people who are part of the subculture a cultural reference point, e.g. 'I'm in a musical.' 'Oh, is that like what they do on Glee.' 'Yes. Yes it is.' 'I therefore consider you slightly less weird because there is a TV show involved.' Strictly Ballroom did something similar for Dancesport, I think. High School Musical has also had a role to play in normalising triple threat as a subculture option.”
In a similar vein, drama teacher and musical theatre performer Helen Carey says, “My very straight, non-theatre, "blokey" husband comes home from the construction site in a good mood on Thursdays because it is "Glee" night! And now it has started on Foxtel, he is recording it, so he can watch episodes he missed from the start. Just goes to show, the appeal is fairly wide. Pretty sure he would die rather than admit this vice to the boys at work. I watch it mainly because I love the voices and I am in love with Puck.”
While the music theatre insiders criticise the show for the over synthesised voices, and will criticise dancing techniques, most agreed that they watch it and that it may bring familiarity to the genre.
As one primary school teacher pointed out, “If I ask my students to lift their performance, it means very little, but if I ask them to ‘pretend you’re in Glee’ the performance standard noticeably improves.”
With Facebook fans numbering close to six million, there is obviously a plethora of Glee fans out there. To be able to entice even a small proportion of these to see, or participate in music theatre, must be a boon to community choirs and theatre.

Websites such as 'Christwire" in the US are calling for Glee to be removed from broadcast because of its focus on mature scenarios including pre-marital sex, drug use and homosexuality.

Originally published in the September / October edition of Stage Whispers.