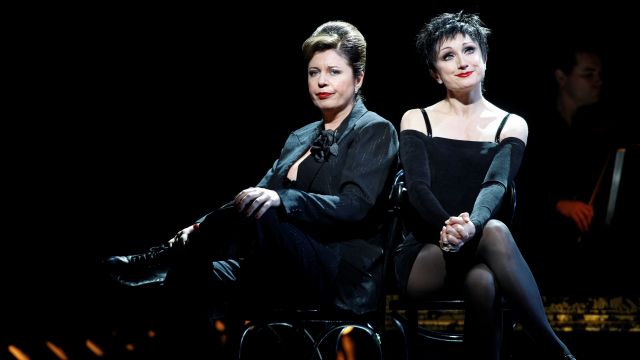 David Spicer surveys the damage wreaked by the Global Financial Crisis on professional and community theatre in Australia, New Zealand and Broadway. While some companies are struggling – others are booming.

Broadway had never seen a January like 2009. Like dominoes thirteen productions fell over – including one third of its long running musicals. Those which closed included Spamalot, Avenue Q, Young Frankenstein, Hairspray, Grease and Spring Awakening.
Even the sight of Harry Potter star Daniel Radcliff in the nude in the play Equus got a limp response from theatre-goers. Some nights were half full.
Composer Stephen Schwartz was asked about the melt-down when he appeared via satellite from Broadway – at the Sydney launch of Wicked.
“It was scary in January when all those seasons closed down,” he said. (But thankfully for him not his musical Wicked.) “But in a downturn people want to escape the hard times.”
When I asked him if there have been particular problems for big musicals he conceded that it is hard for investors to raise funds for new work … however he saw signs of recovery.
“Revivals of Hair and West Side Story have been successful and 9 to 5 is busy. A lot of shows are now doing well,” he said.
When the figures came out for the year the question arose – what recession?
The Producer’s League reported that sales for tickets to see plays and musicals during the 2008-2009 season topped $US 943.3USmillion. It was $US6m up on last year, despite attendances being slightly down.
Plays with big stars did particularly well.
In Australia the biggest declared victim of the global financial crisis was Shane Warne the Musical. It ran for almost three months in Melbourne – and got excellent reviews – but in Sydney closed after a few weeks.
Producers cited the bad economic times. It also didn’t help that the musical – which is a natural for summer – opened in winter in a barn of a venue with poor acoustics.
The refrain from experienced Producers John Frost and Tim McFarlane (from Really Useful) is that during a downturn audiences are more choosy and more conservative in their choice of show.
John Frost has had particular success with Chicago, which has sold exceptionally well in Brisbane and Sydney.
But not all traditional Broadway classics have thrived. In New Zealand – the ratepayers of Auckland City have lost out big time on a production of My Fair Lady. The city’s entertainment business called The Edge proceeded with a three week season of Opera Australia’s production in the face of a certain loss.
The musical opened on March 25 and flopped, losing $1.9 million. It closed two weeks early on April 12 after selling 18,000 of the anticipated 62,500 to 78,000 tickets.
In Sydney a professional production of Guys and Dolls was also poorly attended. Insiders say at some performances there were as few as 100 people in the audience.
One Producer came up with a novel way of beating the recession blues.
Matthew Henderson of Blackbird Productions is touring a revival of Steel Magnolias to every corner of Australia.
“We targeted people when they received their $900 stimulus package from Kevin Rudd. The campaign was to urge them spend the money on theatre tickets,” he said.
“It did help in a tough environment,” he said.
Some theatre companies don’t mind the bad times at all.
Grant Alley of CLOC Music Theatre in Melbourne says his company does better in recessions.
“People can’t afford expensive tickets in professional theatre – but still want to enjoy a night out,” he said.
CLOC staged a production of Miss Saigon and sold out all 15 performances in their 500 seat theatre – two weeks before opening night. Also in Melbourne – Nova Music Theatre sold out its season of The Sound of Music a week out before opening night.
In New Zealand – Showbiz Christchurch did bumper business with its premiere production of Miss Saigon.
Recent Sydney sell-outs include Willoughby Theatre Company’s A Chorus Line and Blue Mountains Musical Society’s Les Miz.
Also in April – The North Queensland Music Theatre Company had its most successful season ever with a production of The Boy From Oz.
So it would appear that in economic downtimes – audiences still want entertainment – but they are looking for better value for their dollar.

Image: Hit - Gina Riley and Caroline O'Connor in the current revival of Chicago.