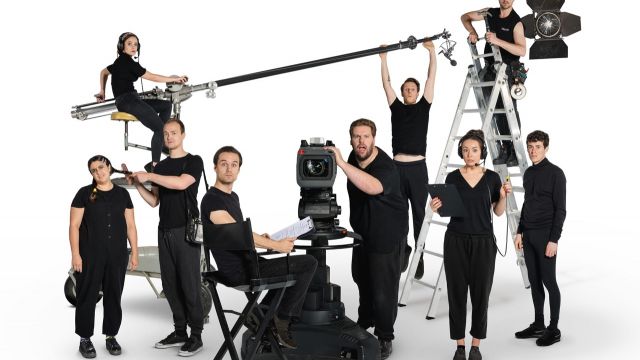 Here is what the critics have said-

“Thank goodness for their genuinely original take…fun for any age.” - Daily Mail

“I watched it three times, and it only got better” - The Guardian

“This stuff has to be directed and performed with pinpoint accuracy if it’s to succeed. Fortunately, it’s perfectly, deliberately, terrible.” – Financial Times

The Goes Wrong Show is written by and stars the original founding Mischief Theatre members Henry Lewis, Jonathan Sayer and Henry Shields, alongside Nancy Zamit, Charlie Russell, Bryony Corrigan, Greg Tannahill, Dave Hearn and Chris Leask.  Every week, the well-meaning amateurs of the Cornley Dramatic Society perform a half-hour play – live in front of a studio audience: a horror story, a wartime drama, a legal thriller, a period romance, a deep south melodrama and a Christmas fable.  And every week, the performance goes terribly, terribly wrong.  Sets collapse, special effects fail and actors forget their lines but the show must go on.  The Goes Wrong Show is simply Mischief Theatre's biggest disaster yet.  The Mischief team also adapted both Peter Pan Goes Wrong for BBC One in December 2016 and created A Christmas Carol Goes Wrong starring Diana Rigg and Derek Jacobi, which aired on BBC One in December 2017.

The Goes Wrong Show is a Mischief Screen/Big Talk production in association with Lionsgate and YTD HK.  The show is produced by Jim Poyser and directed by Martin Dennis.  The Executive Producers are Hilary Strong and Kenny Wax for Mischief Screen, Kenton Allen, Saurabh Kakkar and Matthew Justice for Big Talk Productions and the series is commissioned by Shane Allen, Controller of BBC Comedy, Charlotte Moore, Director of BBC Content and Kate Daughton, Commissioning Editor for the BBC.