Hairspray: A “Brand New Do” in Music Theatre Technology 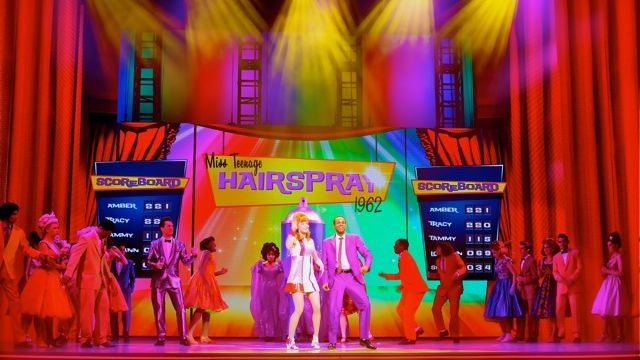 Hairspray the Musical is visual and technological feast, a smorgasbord of bubblegum colours, brilliantly energetic song and dance, and animated cartoon landscapes behind which lie a level of technological prowess unprecedented in musical theatre.

Never before has a stage production engaged with technology to the extent Hairspray does. This is a completely new production to the shows on Broadway and in London’s West End. It is difficult to convey how impressive the multimedia concept, dreamt up by director David Atkins, is. The set design is almost exclusively relayed by enormous LED screens, which move around the stage in various combinations. As characters interact with animated landscapes generated across the screens, it is as though the performers exist within a cartoon world, and we are watching a movie. 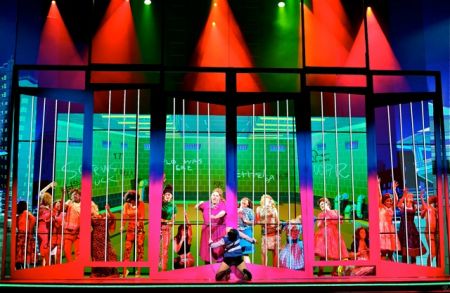 Pre-show the audience gathers in front of the largest of the LED screens, measuring 9216mm wide x 4608mm high, on which footage from the 1960’s entertains and sets the scene. Once the show begins the screen suddenly breaks into three movable sections. A further eight smaller side screens, known as LED legs, are brought into play at each side of the stage, each measuring 1920mm wide and 7680mm high. Throughout the show the screens, manufactured by Bytecraft Superscreens, relay streetscapes, television studios, house interiors, a police van, a jail cell, 1960’s footage, as well as various funky fantasy-scapes.

Stage performers open windows, activate the television, flick a light switch, and quite incredibly move in and out of the animation itself. Virtual shadows follow performers around, and at one point a character extends her arm behind the screen where it appears in animated technicolour! It is nothing short of astonishing. 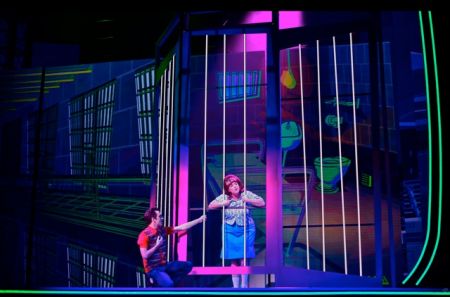 The question on everyone’s lips is how do they do it? How can live performers interact so intimately with animation? How are the various interactions triggered? Can the performers see the media content from the rear of the screens?

Graphic illustrator, Frantz Kantor devised the initial look of the show under the creative guidance of Production Designer, Eamon D’Arcy and Creative Director, Robbie Klaesi. The Hanna Barbara styled cartoon animation is not simply 1960s reminiscence, but acts as a metaphor. Just as the images portrayed in The Corny Collins Show on TV station WZZT bear no resemblance to the demographic reality of Baltimore, a theme running strongly through the script, neither do the animated sets reflect reality. The images are exaggerated in size and colour, with bent perspectives and tilted angles. These altered dimensions play with people’s perceptions just as television studio heavyweights try to disregard reality. Furthermore, by using the LED screens an enduring symbol of the 60s, the television, is elevated. 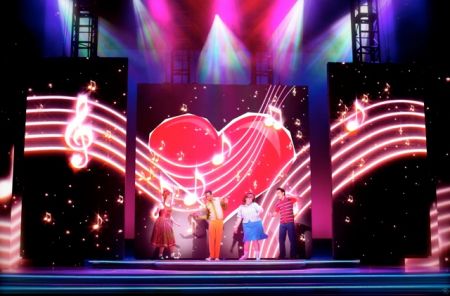 Once Kantor’s visual artwork had been refined, the designs were turned over to a team of 6 animators at Digital Pulse for the next three months. Each scene was simulated in the Sydney studio prior to being flown down to Melbourne, ensuring motion graphics consistency across varying sized LED screens. In total, a massive 3 terabytes of raw data was created during this process and over 600 hours of graphic rendering took place.

Hairspray runs on a time coded click track which enables the musicians to play precisely the same tempo each night. In this way images and music are wedded together. In practice the click track is sent as an audible signal to musical director Stephen Amos. The commencement of each time track is cued by stage management, which in turn feeds the video playback console servers locking the vision to the orchestral tempo. But how does the time track allow for spontaneous interaction by the cast?  ‘If there’s a number that’s going to pull applause we break them up so a pause is always possible,’ creative director of digital content, Robbie Klaesi explains. ‘Coming in and out of click is based on the cast’s interaction with the audience in mostly obvious places; it’s incredibly important to keep the show completely live at all times.’

In addition three cameras are integrated into the playback system, to allow for live pictures to appear within pictures, such as where the live action on stage at WTTZ television studio is pumped through to the television graphic in the Turnblads’ house on the other side of the stage.

The scale of the project has been a huge undertaking. Some 2,874 individual media objects, equivalent to half a terabyte of data, were loaded onto a massive video server. Using OnlyView software these included quicktime animations, stills graphics and sound effects. During rehearsals each media object on the timeline was replaced an average of 3.5 times before achieving the final result. Once rehearsals had begun in the theatre, the programming hours needed for further adjustments averaged 19-20 hours a day, 7 days a week for a 6 week period. ‘I am still tired today,’ confesses Klaesi. Klaesi was nominated for a Green Room award for his work on Hairspray. He credits close collaboration of Director David Atkins, Production Designer Eamon D’Arcy, and Technical Director Richard Martin, with the project’s success. One suspects a sense of humour, supreme patience, fortitude and the ability to thrive on very little sleep were other prerequisites!

One of the challenges such precise technology threw up was the need to revisit the green screen to refigure images for each understudy, and combinations of performers. This means that when characters emerge from behind the screen, or their arm appears as animation on the screen, the interaction occurs at the relevant height for each performer.

The light generated by the LED screens posed particular challenges for lighting designer Trudy Dalgleish. The challenge was to ensure the performers were not lost in the vibrancy of the animation, and that the digitisedsets did not overpower stage lighting or cast, and blind the audience. The solution was to run the screens at 8% capacity of full brightness and adapt side lighting and follow spots to light performer’s faces. So what does one do after an undertaking such as Hairspray? Truth is the work on Hairspray continues for Klaesi. With preparations underway to move the entire show to the Lyric Theatre in Sydney, he has just learned the dimensions of the stage are a little deeper than the Princess Theatre stage. Add to that the possibility some understudy performers may move on to other work and the green screen beckons once more.

Robbie was nominated for a Green Room award for his work on Hairspray. Klaesi’s working biography reads like a dream. In Sydney he was Technical Manager for New Year’s Eve Celebrations (1990-2003), and responsible for the design and execution of “Eternity”, the iconic HarbourBridge effect. He executed the Closing Ceremony HarbourSpectacular for the Sydney Olympic Games (2000). As Technical Director for UN Independence Celebrations in East Timor (2003), Klaesi worked directly with Xanana Gusmao and Jose Ramos-Horta. He was Producer of Digital Media of the Opening Ceremonies for the Shanghai World Expo, the Vancouver Winter Games (2010), and Doha Asian Games (2006).

The Sydney season of Hairspray commences at the Lyric Theatre, Star City on June 24.