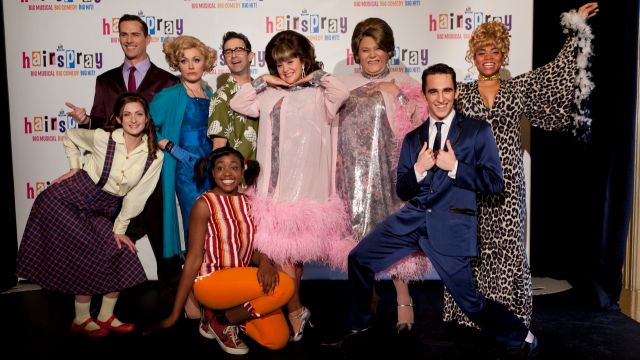 The nine Australian principal cast members of Hairspray The Musical, to open at the Princess Theatre in Melbourne, on Saturday 2 October, have been announced.

Starring in the lead role of the girl with big dreams and big hair, Tracy Turnblad, is newcomer Jaz Flowers. Twenty two year old Jaz Flowers grew up in Gippsland, Victoria and this is her first lead role in a major musical theatre production. Her professional debut on the stage came only last year in 2009 when she was cast in Shane Warne the Musical and most recently Jaz has been seen playing the role of ‘Mabel Washington’ in the production of Fame the Musical.

Tracy’s doting mum Edna will be played by Trevor Ashley, a performer often described as ‘the busiest man in Australian show-business’. John Travolta made history when he donned a frock and knocked us out with his performance as the humble housewife Edna in the 2007 Hairspray film, Trevor is set to do the same.

Playing the role of the heart throb of The Corny Collins Show Link Larkin, is Jack Chambers. Jack earned a place in Australian entertainment history when he was crowned the first So You Think You Can Dance winner in 2008. Since winning So You Think You Can Dance Jack has been living his dream of the dance career he longed for in New York. In the big-screen version, Zac Efron seduced all the girls with his silky smooth vocals, Jack comes home to Australia for the role of a lifetime to do the same and is excited about showcasing his incredible singing skills alongside his award winning dancing skills.

Grant Piro, recently seen in the MTC production of The Drowsy Chaperone, will perform as Tracy's adoring Father Wilbur Turnblad. The glamorous role of Velma von Tussle will be performed by Marney McQueen, well known to music theatre audiences through her role as ‘Marion’ in the Australian production of Priscilla Queen of the Desert – The Musical.

Scott Irwin plays Corny Collins, the outrageously dashing host of the local TV dance show. The Queen of Baltimore Soul is radio DJ, Motormouth Maybelle and she will be played by Cle Morgan, best known as one of the Top 12 finalists in the 2003 debut season of Australian Idol.

The role of Tracy’s best friend Penny Pingleton will be played by Green Room Award winner Esther Hannaford and streetwise and spunky Little Inez will be performed by Nancy Denis.

The Australian production of HAIRSPRAY is produced by entertainment impresarios Dainty Consolidated Entertainment, who were the original producer of Mamma Mia! and are currently delighting Melbourne audiences with their production of the hit stage show Jersey Boys and Roadshow Live, who brought the phenomenally successful New Line Cinema film HAIRSPRAY to Australian cinemas in 2007. The film was seen by 1 in 10 Australians and the subsequent DVD release has achieved multi-platinum sales of 300,000 copies.