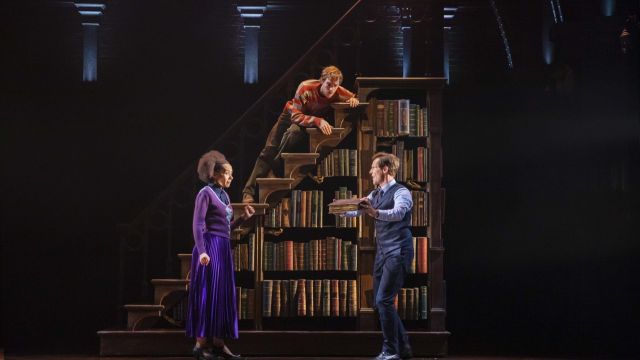 Harry Potter and the Cursed Child will resume performances on 25th February 2021, after a hiatus of 49 weeks. The production suspended a record-breaking run at Melbourne’s Princess Theatre after public health measures were imposed by the government due to COVID 19.

Producers Sonia Friedman, Colin Callender, and Michael Cassel added: “We would like to extend our heartfelt thanks to all Victorians and the State Government for their commitment during these extraordinary times, and for allowing us to safely return. We are thrilled to congratulate Melbourne as the first city in the world to re-open Harry Potter and the Cursed Child and extend a special thank you to our loyal audiences who have stuck with us. On behalf of everyone in the Harry Potter and the Cursed Child company, we can’t wait to welcome you back.”

CEO Visit Victoria Brendan McClements said today, “From its opening in February 2019, Harry Potter and the Cursed Child established itself as one of Melbourne’s iconic entertainment destinations.This production is a major draw card for visitors and the opening will be a significant step forward to reactivate the East End Theatre District. I wish the production well as it welcomes audiences back to the theatre in February of next year.” Marriner Group’s CEO, Jason Marriner said, “ The health and safety of our audiences are paramount and we can assure everyone entering the Princess Theatre doors that the utmost care and detail has gone into making the theatre-going experience safe. We very much look forward to welcoming you back.”

For further information regarding visits to the theatre please refer to

Tickets are now on sale via the official website HarryPotterThePlay.com. Performances from 20th January 2021 through to 24th February, 2021 will be postponed and rescheduled. Ticket holders will be automatically moved to an alternative date from 21st July 2021 onwards with the same seating allocation they originally booked. Ticket holders affected by this final postponement will be given the option to exchange their tickets to earlier performances, subject to availability. The Australian production officially opened with a carpet performance on Saturday 23 February, 2019. Melbourne was the third city worldwide to welcome Harry Potter and the Cursed Child, after London and New York. It will unequivocally not play any other city in Australia. Based on an original new story by J.K. Rowling, Jack Thorne and John Tiffany, Harry Potter and the Cursed Child is a new play by Jack Thorne, directed by John Tiffany. It is the eighth story in the Harry Potter series and the first official Harry Potter story to be presented on stage. Both parts of the play are intended to be seen in order on the same day (matinee and evening) or on two consecutive evenings.

It was always difficult being Harry Potter and it isn’t much easier now that he is an overworked employee of the Ministry of Magic, a husband and father of three school-age children.

While Harry grapples with a past that refuses to stay where it belongs, his youngest son Albus must struggle with the weight of a family legacy he never wanted. As past and present fuse ominously, both father and son learn the uncomfortable truth: sometimes, darkness comes from unexpected places. How To See The Play

Harry Potter and the Cursed Child is one play presented in two parts. There are three options for how to see the play:

From $65 per Part.* For every performance there will be more than 200 tickets priced at $65 or less. *Plus $9.75 Ticketmaster Handling Fee per transaction. A delivery fee may apply depending on the mode of delivery selected.

Groups of 10 or more can book via the Ticketmaster Group Bookings Department on 1300 889 278 or groups@ticketmaster.com.au.

Each week, 40 tickets for every performance the following week will be released via TodayTix for some of the very best seats in the theatre at $40 per part, per ticket ($80 total). These tickets are known as ‘The Friday Forty’. Visit harrypottertheplay.com/au/the-friday-forty/ or TodayTix for more information.

HARRY POTTER AND THE CURSED CHILD

Images: The Australian company of Harry Potter and the Cursed Child. Photo Evan Zimmerman for MurphyMade.