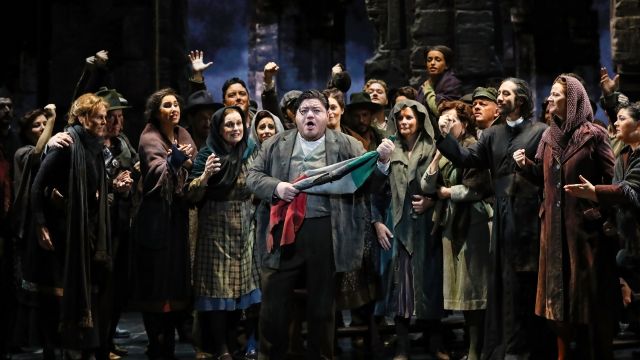 With theatres around the world dark, Stage Whispers celebrates some heroic performances by actors thrown in at the deep end to take over a role with just a few minutes, hours or days’ notice. David Spicer chronicles some great escapes.

“On Tuesday night I sang in a performance of Aida, then on Wednesday I sang out in rehearsal from 10.30am until 6pm for Lucia Di Lammermoor,” he said.

“And then I go home to have a rest. After an hour I received a call.”

The message was alarming. The lead tenor in Rigelotto had become ill during a performance at the Sydney Opera House, just before the show-stopping aria.

“Ok I said. I came to the Opera House and I sang Rigoletto,” he tells me with the casual aplomb of someone describing eating a sandwich. 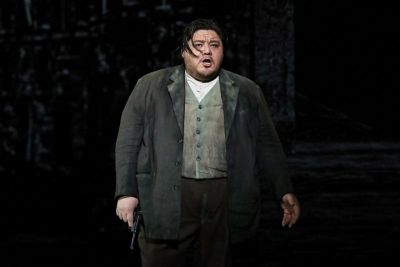 Diego Villegas had performed the role before – two year’s prior - and he was officially covering the part, but he had hardly any time to revisit the opera in the lead up to his performance.

“When I know I have to be the cover I have to know the work, but I never expected it to happen in the week I was busy the most.”

The pressure to nail the lead role to a live audience, which had endured an unexpected interruption, was intense.

“It was crazy. I was really happy. It was very good and successful.”

Diego has been an Opera Australia regular since he emigrated from Mexico in 2011. As well as having a formidable voice he has an excellent memory.

“I am easy to learn operas. Normally takes me two weeks to memorise one.”

After his heroic performance, Opera Australia gave him the next day off.

“Then Friday I again sang Lucia di Lammermoor. Then on the Saturday I sang Aida.”

On Sunday, we presume, he had a sleep in. Last year on a Saturday morning, Sydney performer Melody Beck got an exciting message from a friend: could she perform the role of Jenny Lind in the musical Barnum in Melbourne … that night!

The performance was due to start in ten hours and she was in another state.

“It was a frantic flight down to Melbourne. I was there at three o’clock for a rehearsal. I literally stepped off a plane and onto the stage, where everyone was waiting to place me where I needed to be,” she recalls.

The production had suffered a series of misfortunes. Just a few days after opening night, no fewer than three of the female leads had contracted laryngitis or the flu.

The role of Jenny is critical to the story as she is the love interest of Barnum (portrayed by Todd McKenney).

Melody had only a general knowledge of the musical.

“I had sung Jenny Lind’s most famous song “Love makes such fools of us all”. I had performed it in English before, but (in the musical) the first verse was in Swedish.”

“We all just got on with it: blocking, song learning, movement, scene work, costume fitting, make-up and wig fitting, and at 7pm we were on.

“They developed a (script) booklet for me. I could hold it and look down to read.  I would occasionally glance down, then look up.”

The role was slightly trimmed.

“They cut down one track and I would stand in one place and not join in the choreography. I was acting and singing, but not moving.” Such was the impact of illness on the cast that the director Tyran Parke also had to come on stage to help move around the set.

“I remember halfway through the show, Tyran was running me through some blocking and just stopped and said, 'remarkable, you are remarkable'.”

How does she rate her performance?

“Everyone stepped back and said who is this girl? I think they were impressed that the show was able to go ahead. I was aching for the chance to do it again.”

Unfortunately, it didn’t work out. Melody was set to perform the next day at the Sunday matinee, however one of the leads recovered enough to go on, so Melody was on standby.

“I truly cannot wait to work with that incredible team again on another project - maybe with a little more warning next time.” Sydney community theatre doyen Christopher Hamilton received a frantic telephone call at one o’clock in the morning in 1991, from a director at the Orange Theatre Company.

“The guy who was playing Sweeney Todd (in the Stephen Sondheim musical) had stood on the trap door of the (barber shop) module, fallen through the trap door, and had ruptured his spleen,” he said.

“The Director asked if I would come to Orange and play the part (in two days’ time). I said I don’t know the role. He said that’s OK, we will rehearse you through it and you can carry a script.

“The next day a script and score arrived on my doorstep. They had couriered it directly from Warner Chappell Music. I was working for a bank. I rang them up and said I am going to have some leave. Goodbye.

“I was very lucky to have my talented wife Jayne to assist, who is a great pianist and a musical director. We did some work here and both flew down to Orange. I just literally went into rehearsal for two days, rehearsing with key members of the cast to get this under my belt.

“I was slightly terrified. I was fine until Opening Night, then whilst I was standing in the wings thought what the hell am I doing? Why did I agree to this? Then I thought, nobody knows me in Orange, so off I went.” Did he look at the script on stage? “Yes and no. It became more of a comfort, just in case. I focussed on learning the songs, particularly at the end of act one, that covered the real turning point of his character.

“I carried the script for the first two performances. For the third performance I put it down on a trunk in the barber shop. The boy inside the trunk opened it and the script went flying and disappeared. So, I had to do it all from memory.”

Later in the 1990s Christopher got the chance to play the role again at Miranda Musical Society.

“It was good to revisit it and be much more across it. Sometimes in community theatre you only have enough time to just get into it. It was good to delve a bit deeper.”

He much prefers having more time to rehearse. “(Only) when you are young and foolish would you gird your loins to take such a surprising risk.” Producer Spencer Bignall was sitting in the audience at the opening night performance of Assassins at the Sydney Opera House in 2018, as Bobby Fox began a routine that was genuinely a showstopper.

For the song - the ballad of Guiteau – he was skipping over a plastic rope - illuminated by LED lights.

“It looked phenomenal. He was skipping over and over, running really fast. He was up to the last step of the skip when he was due to jump to the side. As he landed, he turned his ankle, completely snapping one of the bones,” he recalls with a wince. Bobby collapsed and had to be carried off the stage.

“We were in the audience and thought maybe he had just rolled his ankle. The cast tried to continue for about ten seconds. Then David Campbell came out and said we are going to have to stop the show.

“We sprinted backstage. He was in a lot of pain. Our first priority was to see that he was OK and off to hospital.

“Under normal circumstances we would cancel the rest of the show (as it had 20 minutes to go) but it was opening night and at the Opera House. So we thought, is there a way we could finish the show?

“By freak coincidence Bobby had missed the first chunk of the rehearsal period. I had been reading his lines for him to keep it flowing and standing in to handle props.”

A light bulb went off and Spencer walked on with a script. I was sitting in the audience that night and he fitted very neatly into the rest of the production. “People think it must have been a lot more freaky than it was, but I knew he had done his big number. I knew roughly where I had to stand and what I would have to do. My worry was for Bobby and getting the cast to finish their opening night.

“The thing that is really impressive is what happened the next day.

“Ryan Gonzales was in audience on opening night and was a month away from starting rehearsing for Jersey Boys.”

The next day Ryan started rehearsal at nine am. He learnt the whole show in one day in time for the 7.30 performance.

“He had a script in hand for two performances but by the first night he knew all the choreography, props and logistics bar a few bits of dialogue.”

There was extra tension during Ryan’s first performance.

“I remember sitting next to Lisa Campbell, and I don’t think Lisa, or I, breathed for the entire show, but especially during that skipping routine.” Thankfully it was not literally a showstopper.

So, who really needs a long rehearsal period?

“From a producer’s perspective I’d love to save the money, but I don’t think it would go down too well.”

Images: Ashleigh Rubenach and Spencer Bignell on the opening night of Assassins and Ryan Gonzales.