How to Dance Up a Storm (even if you have two left feet). 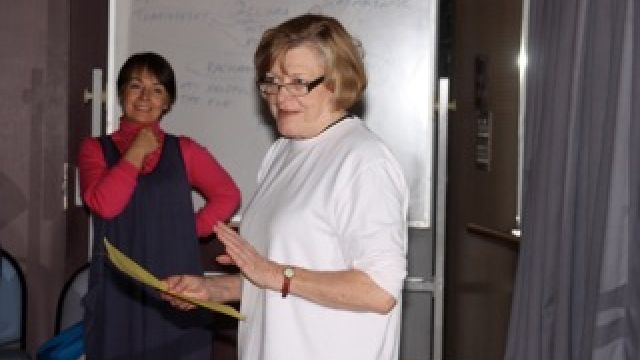 I was such a bad dancer that during a rehearsal for the Waverley Lugar Brae Players’ production of Kiss Me, Kate, the musical director threatened to walk out if I wasn’t shipped out.

With such a wobbly reputation in the feet department, I always relish my two-hour dance lesson with Nancye Hayes at the Association of Community Theatre’s bi-annual conference. It is so much fun, that afterwards I get swept up in the euphoria and become determined to take up dance lessons; alas, until that wears off the next day.

During the session, Nancye drops so many pearls of wisdom that I thought I must collect them to make up a necklace for our readers.

“I call my sessions with people like yourself getting over the fear of your feet,” she told me over a coffee in Sydney’s Potts Point. 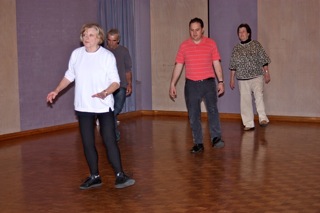 “So many people in the audition room are terrific; they are just what you want but then you hand them over to the choreographer and you see their eyes glaze over. They say, ‘I can’t do that.’

“No matter how kind or patient the choreographer is, they just get these mental blocks that will not translate to their feet. And it is such a pity they can’t do it and it rules them out of so many opportunities.

“I like to make people feel there is no such thing as a bad dancer; they just haven’t found their groove. Just like voices, there are great voices but there are some interesting voices in music theatre because they have found their way of presenting a song.”

Keep that face going and they will never get to your feet.

“If you have a good attitude, if they are riveted by you, they may never get to your feet. You need to look confident and do your homework,” she said. 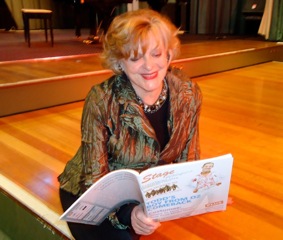 If you are going to make a mistake make it a BIG ONE.

“If you get something a little bit wrong, I don’t want to see it. If you make a mistake, make a big one and we will fix it. People kind of half do things; that is even worse, because they don’t commit and are unsure,” she said.

“You need to look confident. Don’t look like you are making an excuse for being there. If you are not having fun then the audience will not be having fun. If you look frightened, then will the audience be too,” she said.

“Don’t put your version in a show; do what the choreographer wants. There is a reason they want it done a certain way. Don’t think I will jazz this up, with a pop of the hip or a shrug of the shoulder. Don’t do it,” she said.

This not just a problem for amateurs; Nancye says professional dancers can be the worst culprits.

“I went to a singing and dancing conference in the south of France (which was) recreating great show stopping choreographic moments from music theatre on video. It did things like West Side Story, A Chorus Line and The Boy Friend.

“The French dancers, who were all absolutely gorgeous (and you went oh my God do I have to stand next to that person), all did everything like they were in the Follies, even if it was West Side Story. We’d say get into the ground; they would be up on their toes, body pulled up. I thought, that is a prime example of not being to change or adapt to any style. They just danced like, I am beautiful and I am in the Follies.” 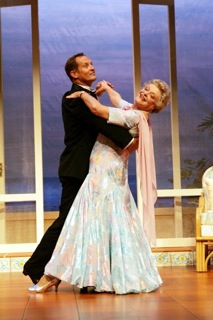 For the dance session, Nancye covers a range of musicals and styles. The students are taught the basics of box steps, hitch steps, grapevines, 123’s and step-ball-changes.

“I like to put together a little combination and make people do it as a character> I think that makes people who are actors connect much more,” she said.

“Like I will say, do it as a tennis player, do it like a gangster, like a showgirl – so it is the same little set of steps, but they give a character to play,” she said.

In the two-hour session we graduate to some sequences from famous musicals such as A Chorus Line and the ball in My Fair Lady.

Nancye says the aim is to make participants think you really are a dancer.

“If you give someone that feeling that they are out there doing it, by the end of the session I have people feeling confident. It gives me a great thrill; I really enjoy it,” she said.

With a little bit of confidence, even non-dancers can score the big parts.

“On the production team we do a little bit of bargaining. A choreographer will say, ‘Can I have that dancer?’ but (he/she) might not be a good singer. Then someone else will say ‘can I have the great singer who can’t dance?’ Often a bargaining process goes on. Often a trade off,” she said.

The only downside for me is that the next A.C.T. conference, and my next dance lesson, is not until 2012.

I guess I could be in trouble if I have not done any practice in between lessons.