How to Make a Hit Musical: Cameron Mackintosh Exclusive. 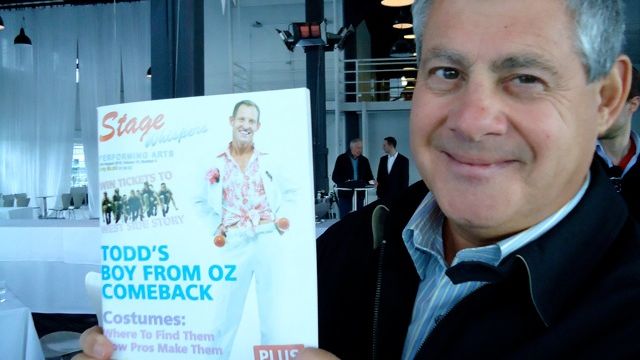 If anyone knows how to make a hit musical it’s Sir Cameron Mackintosh. But when the Producer of Cats, The Phantom of the Opera, Les Misérables and Miss Saigon was in Australia to launch Mary Poppins, he told Stage Whispers that making a hit is a ‘lucky accident.’

When Sir Cameron Mackintosh was trying to raise the cash to stage Cats he readily admits it was a big struggle.

Sir Cameron says he doesn’t quite know what the X-factor is in creating a hit musical.

“Usually a lucky accident and being involved in something that takes the public imagination. To be honest, you never know it in advance. Usually big shows which they say can’t fail are the ones which fail first, because they are not original,” he said.

“If you look at all the major hits, like Cats and West Side Story, they are the ones the professionals said would never last. I mean West Side Story closed after 20 months and didn’t even get good reviews. It was the film which made it a success. Fiddler on the Roof got pretty poor notices and became one of the longest running musicals,” he said.

If Sir Cameron doesn’t admit to knowing exactly what the X factor is, he certainly must have a hunch. According to the most recent rich list, the former stagehand is the wealthiest Scot on earth … worth a cool 635 million pounds, with more cash than Sir Paul McCartney.

A few clues to the ingredients in the ‘hit’ recipe can be seen in the way Sir Cameron put together the musical Mary Poppins, currently on stage in Melbourne. This was a Producer driven project, rather than a writer driven project.

“In the 1970’s I thought Mary Poppins would make a good stage musical. Like others, I approached the writer Pamela Travers and got turned down,” he said. 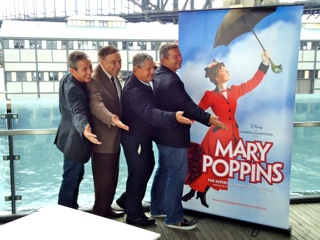 Persistence paid off – by the mid 1990’s he got the rights from Pamela Travers, then finally did a deal with Disney to use some of the songs from the hit movie.

The original composers were the legendary Sherman Brothers. But, as explained, this was a Producer driven project, not a writer driven one. Cameron Mackintosh wanted the hot new song-writing team of George Stiles and Anthony Drewe to write new songs and extend the original songs.

He explained his plans to the composer Richard E Sherman.

“He was terribly grown up when he came to my office. I said, the good news is we are doing the show, the bad news is we are taking your material and giving it to a team of people to work on, and when we are ready we are going to show you what it is,” he said.

Recently in Sydney, the three creatives, George Stiles, Anthony Drewe and Richard Sherman, gave Stage Whispers a delightful performance, explaining how the songs and themes were developed. You can listen to them exclusively at www.stagewhispers.com.au/news/exclusive-mary-poppins-composers-sing

All the creatives followed the tune set by Sir Cameron. On his projects the Producer is the ultimate artistic leader, not the writers.

With such a Midas touch, Cameron Mackintosh has over the years been inundated with people sending him new musicals to produce. Then he warned them off, declaring that he no longer wanted to be sent new material.

“I only do a new musical every ten years you know. At the moment I’ve got 35 productions I have got to do over next three years, excluding the ones I’ve got running now. I’ve got the new Les Misérables that has been so successful. I will have ten new productions going on - five Mary Poppins are in pipeline, there is Miss Saigon and a new Phantom of the Opera I’m working on with Andrew Lloyd-Webber,” he said.

Love Never Dies, the sequel to Phantom, has nothing to do with Sir Cameron. I asked him if he liked it? 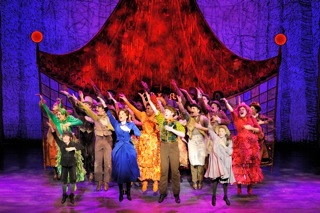 “Andrew has always written great tunes, but the show needed work on the book. That is what he is in process of doing. If the book had been as good as the score, it wouldn’t have been a problem,” he said.

How fascinating it is to note that since Andrew Lloyd Webber went his own way and stopped allowing Sir Cameron to produce his musicals, the hits have been scarcer. The musicals have become writer driven rather than producer driven projects.

So if Love Never Dies does not excite Sir Cameron, what new musicals do?

“I never go to the theatre,” he said with a grin. “I live in the country on my farm with my cows. I hardly ever go to London except to do up my theatres and do productions. I haven’t been to the US this year,” he said.

Does he think the era of jukebox musical is coming to an end?

“No, if it is a good one it will work. It has actually become part of the canon of musicals. I don’t think there are rules. I think people said 15 years ago that through-sung musicals are dead, it is only book musicals, but a good through-sung musical will do just as well. It takes all sorts, as long as it is good,” he said.

The problem according to Sir Cameron is that good musicals have always been few and far between.

Something new has recently caught his fancy. It is called Betty Blue Eyes, based on the film A Private Function, and it will open next year. Like the film, the musical will be set in post-war England, and tell the story of a small town organising a street party to celebrate the nuptials of Princess Elizabeth and Philip. However, rationing is in effect and people are forced to hide the porker despite it's being the centrepiece of the feast.

"The title is in honour of our lovely Queen. Well, they are both catalysts of the story. We have the marriage of Elizabeth and Philip - and our heroine, the pig, is Betty Blue Eyes. I haven't checked the Queen's eye colour recently, but they're rumoured to be blue."

And how was he tempted to stage it?

“George Stiles and Anthony Drewe came and showed it to me, and I said I’ll have that,” he said.

Which goes to show that Sir Cameron still has fire in the belly to produce, even if the belly on stage is of the pork variety.

Originally published in the September / October edition of Stage Whispers.