IT’S ALL OVER IF THE FAT CHANDELIER SINKS. 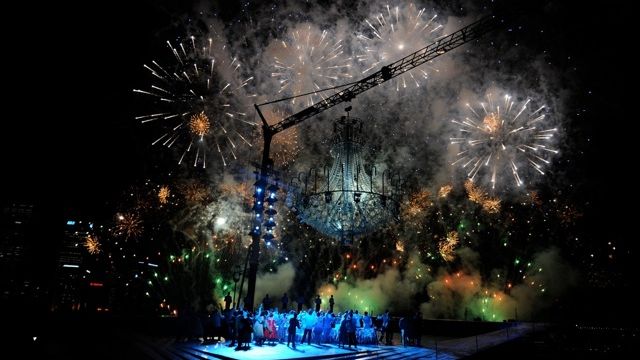 They’ve billed it as they greatest show on water. In March/April Opera Australia is staging La Traviata on a massive stage on Sydney Harbour. For Brian Thomson, Australia’s most successful set designer, it’s another milestone. David Spicer asked him to compare this project with other acclaimed sets he’s built in Australia and on Broadway.

David Spicer: What is the budget for La Traviata and how does it compare to other productions you have worked on?

Brian Thomson: The whole thing will cost $11.2 million, whereas I had $15 million US to spend on the Broadway production of Priscilla Queen of the Desert.

BT: The stage is 32 by 24 metres. The frame floats on pylons drilled into harbour (floor). It is not far from the shore so there’s a linking pontoon walkway for the cast to get there. We will also have an arrival by boat for Flora’s party. It will be a Grace Kelly style arrival by launch.

DS: How appropriate is the concept on the Harbour?

BT: The opera is not harbour specific, but the music is sensational and its rhythm and texture will give people something sensual, like they are floating on water. We are also using fireworks, and the aria Semper Libera will be sung in a giant chandelier, just like the spectacle of the songs sung on top of the bus in Priscilla. 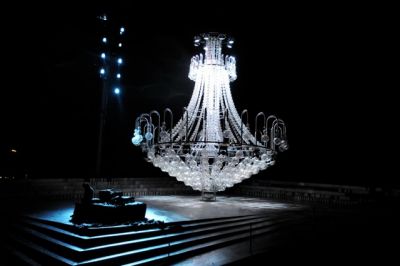 DS: Tell us about the chandelier.

BT: Whenever I think of the music, I always think of crystal chandeliers. It is suitable to grand locations. It is designed like a giant flower.

DS: What are the logistics?

BT: It’s 9 metres by 9 metres. Wider than the Big Pineapple. It will be hung on a crane over the stage. It will start off sitting on an angle on a stage all covered up under a big shroud, then it rises as a late night party occurs?

DS:How difficult is it to get this together?

BT: This is an extension of things we have done at the Olympic Games (Opening Ceremony in 2000). Except we don’t have the facilities of a theatre or stadium – we just have a harbour. The chandelier is being built in Melbourne, trucked to Sydney and put on a barge from another part of the harbour. It's made of steel and a vacuum formed structure that includes 10000 real crystals.Fingers crossed it does not sink.

DS:What else is bigger than Ben Hur?

BT: There is a ten metre long table in the first act, and a nine metre long stretched Chesterfield sofa. Everything has to be put in big gestures. All the colours will be bold…great big visual

Stage Whispers also hears that many tricks of the trade will be employed. While Opera Australia traditionally makes props such as glassware from plastic, in this case everything on the dinner table will be sturdy and magnetised. They will literally be attached to the dinner table in case the barge tilts or the tablecloth is lifted by strong wind. 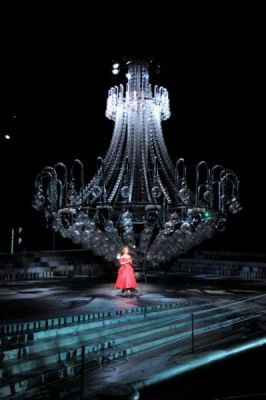 DS: What gives you the biggest kick, big projects like this or doing something amazing on a modest budget?

BT: What excites me most is ideas. I find the process completely intuitive. To pluck ideas from the air and taken them further. As soon as the idea of chandeliers came up, everyone wanted to make it happen. Likewise when I designed La Boheme last year with Gale Edwards, she came up with the idea of setting it in the Weimar Republic and I thought of setting it in the Speigeltent. So we married both ideas together.

DS: Can you explain how you start with a model box and build on it?

BT: When I first came into theatre I had zero knowledge of performing arts. I was an architect who was really good of making models. I will start with a few scribbles. I then make a white cardboard model. Then I photograph it and use Photoshop to put colour through it. I always build the first rough model to see how it works. When I did the design for the play Stuff Happens on the ruins of 9/11, I worked on it 18 hours straight to make and test the model.

DS: Looking at some of your other recent projects where did the money go in the Broadway production of Priscilla?

BT: It always costs three times as much in the US. There is a massive backstage crew because of the strength of the Unions. There is no multi-tasking.

BT: The bus now has LED images on it. The daggy old silver bus has become more of a character. When they paint it you see their brush strokes. When they sing Girls just want to have fun, you see yellow rubber ducks float around it. It took a hell of a lot of work on the producers to go for it.

DS:I noticed you used this ‘trick’ in the Opera Bliss. Shapes of characters or images were painted in small lights on a wall covered in lights. How did you do this?

BT: Technically we broke a lot of ground. LED festoon bulbs were hard wired to a computer program which controlled whether they were on, off or dimmed, or what colour they were.

DS: Where are you off to next?

BT: I am going to the opening ofPriscilla in Sao Paulo. Then there are plans for a cut down tour and maybe down the track a production in Las Vegas. Each step is hard and precarious, but we think it has ten years of touring left in it.

The Chandeliers are less mobile than the bus. You can only see La Traviata on the Harbour in Sydney from March 24 until April 15. 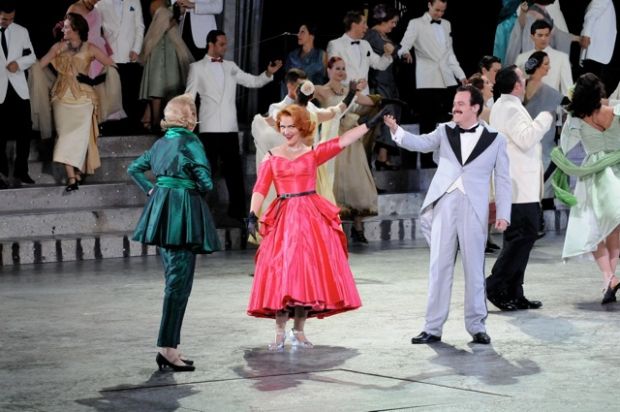 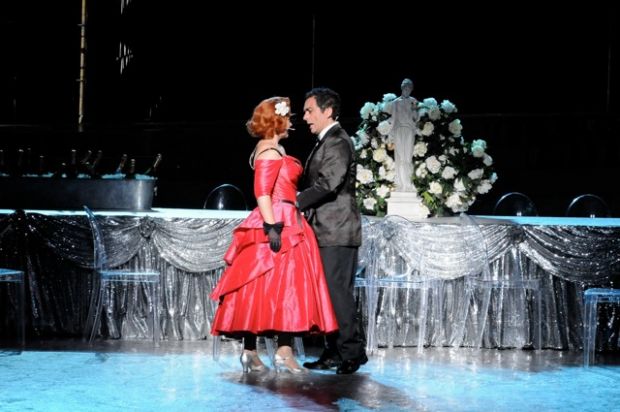 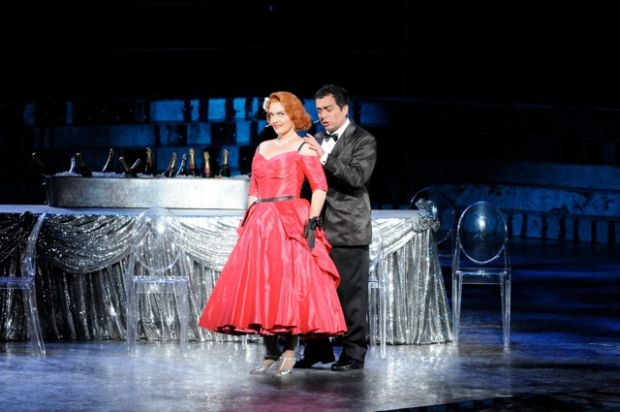 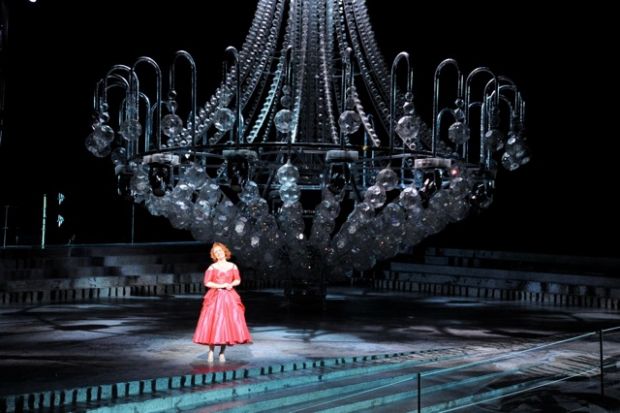 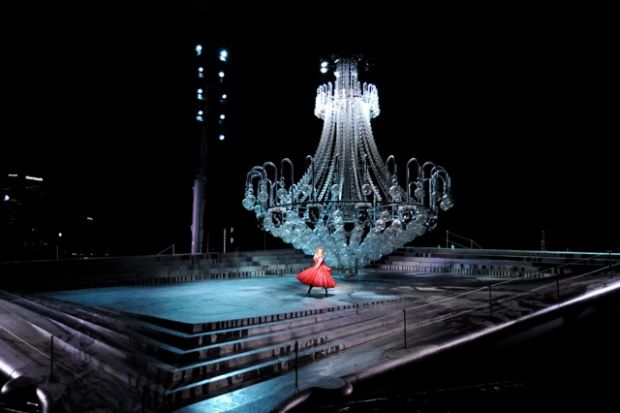 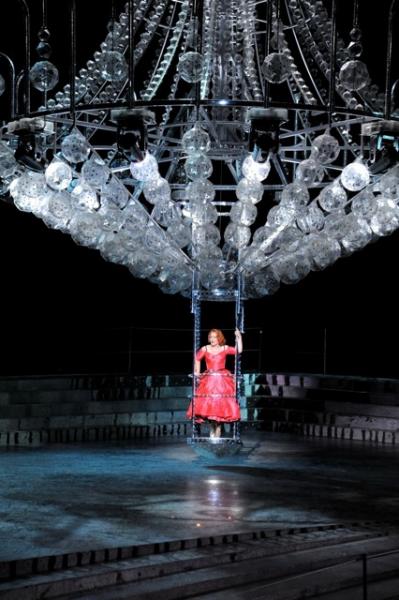 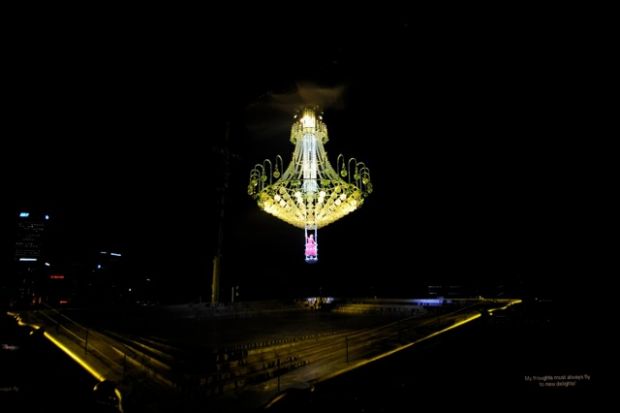 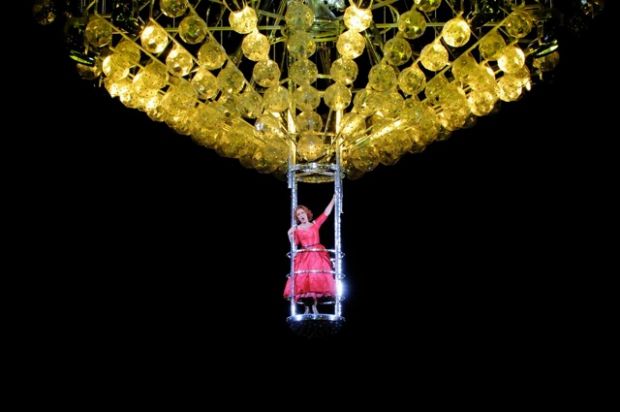 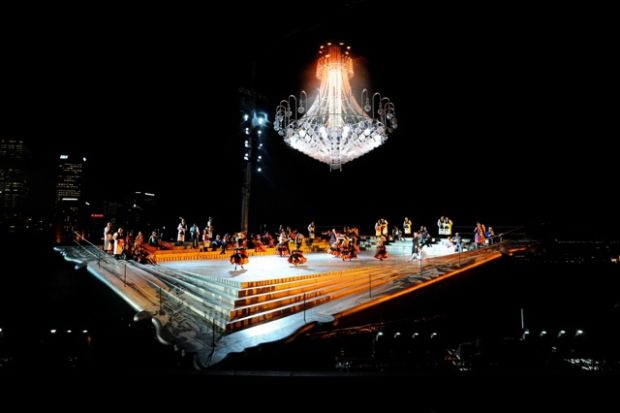