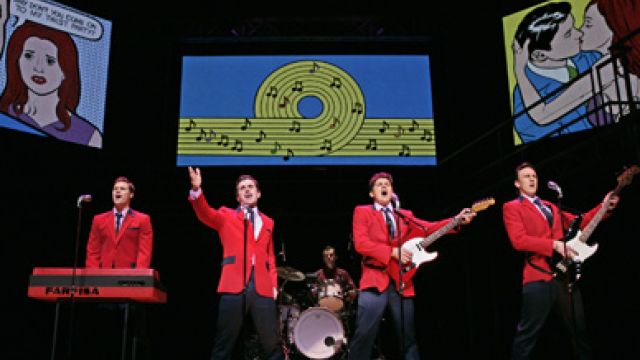 It has been announced that Jersey Boys - The story of Frankie Valli and The Four Seasons - will play its final Melbourne performance at the Princess Theatre on July 25, by which time the Tony Award winning hit musical will have played 453 performances. Jersey Boys will open in Sydney, at the Theatre Royal, on September 18.

Prior to the Melbourne season, Bobby Fox spoke to Stage Whispers about auditioning and preparing for his first lead role, as Frankie Valli.

In this interview with Neil Litchfield, now online in full for the first time, he revealed that he almost blew his big chance at stardom.

“When I auditioned I knew I could sing all the Frankie lines. I had one very bad audition – which was at the beginning, thank God, and then a series of very good auditions.”

What went wrong first up?
“I’d made the wrong song choices. I was nervous because I’d seen the show before – generally I can handle my nerves quite well. I’d auditioned for most of the panel before, and after the audition they just said, ‘You’ve never been like that before in an audition room – why don’t you go away for two days, pick different songs, come back and don’t be like that.’ ”

What is the key to an audition?
“Being myself, to be honest, and to trust that what I have is what they need and want.”

And the experience of moving from ensemble to lead?
“The only thing that really changes is how other people see you, think of you or speak about you. That’s the main difference.
“It was all very exciting when I first got word of it, but then I had to be quiet about it for about four months.
“I couldn’t tell people until after I went to see the show again in New York. Then I could tell people. By then I’d known for ages, and people were all very excited.”

What key things were you getting used to?
“Vocal health. Just physical health is a big thing. If you’re an actor or a dancer you can get away with being sick, but if you’re a singer you just can’t. My goal for this entire run is at no point to get sick at all. In saying that, it also makes me understand the importance of rest.”
“Since Frankie told me 'Rest, rest, rest,' even during rehearsals I’ve been sleeping a minimum nine hours a night. Last week I had an eleven hour sleep.”
“And it’s showing, because I’m not feeling vocal fatigue. I really feel as if my voice is getting stronger and stronger – and I think it’s because of my mentality on resting and work. So, when I’m at work I work hard, but when I’m at home I don’t.”

What qualities of Frankie’s voice do you have to bring to your own?
“Obviously with the falsetto, it’s just a tonal quality. Frankie didn’t really have a break in his voice and was quite a natural high singer. I’m a natural high singer too, but I’ve never had to use it as much. Frankie had been singing all that falsetto stuff since he was a kid – it became his iconic singing style – he was able to sing that with no problems. For me there was quite a bit of building to do – not even to build my voice up, but to build my awareness of how my voice worked.”

While there’s a lot of Four Seasons music in the show, is it what you’d call a ‘jukebox’ musical?
“It’s a show where first and foremost the story is the driving force. It’s like watching a movie about a band, like say Almost Famous, where the band’s music is the soundtrack to the movie. The only time you see the Four Seasons perform is like in the recording studio, or on the street corner when they were putting their harmonies together and in big arenas or small theatres. They’re not narrative whatsoever – they don’t further the story – there’s, let’s say, no girl called Sherry in the show who Frankie meets in a bar and starts singing to her. There’s no-one called Dawn. It is the true story of the band, and everything that you see in the show is totally true.
“Another thing to take into account – Jersey Boys won the Tony Award for Best Musical in 2006, but in that same year they were nominated for Best Drama as well, up against some of the most amazing plays.”

When you were in New York you worked in the studio with Four Seasons songwriter Bob Gaudio … what was that like?
“I worked in the studio with Bob Gaudio in New York for about five days, which was definitely a landmark in my career, and my life. I was working in the studio on cultivating Frankie’s sound, talking about the way Frankie performed and what he wanted to do. It was such an easy-going experience – it was just, 'We’ll take you into the studio.'
“He would play the backing track and I would sing over it, and he would play it back to me, and go, ‘see what you’re doing there and there’s got to be more of this in it and that in it,’ and stuff like that.
“I was working with a living legend. He wrote a lot of the songs.”

And you saw the show?
“I saw the show two years ago with the original Broadway cast. It was great seeing them when I didn’t know anything about the show. I wasn’t watching it thinking I’m going to be in this, I was just watching it to see a show – I wanted to be entertained and moved.”

And your impression seeing the show when you didn’t know you would be appearing in it?
“When I saw it the first time, that was the best time I’ve seen it. Every other time it’s been great, but I’ve been looking at it more objectively – with more intent – looking at the role and looking at the show.
“It was so fantastic. I didn’t feel like I was watching a musical. A lot of the time when I watch musicals, sometimes I hate when they go into songs - it can just be so predictable. There are moments where this moves through so quickly that you don’t realise you’ve just heard four songs. You’re so enthralled and committed to the characters, because you’re being told an amazing true story.
“Story telling is a very primal thing for us – being drawn away to your world into someone else’s world – just for a moment. Watching the show, I was just completely taken away into another world. I’ve only ever twice seen a show and gone, 'please don’t let it end,' and Jersey Boys was one of them.
“It’s a very male orientated, male driven show. One of the guys, Tommy, was heavily intertwined with the New Jersey mafia, and put the band in a million dollars worth of debt in the 70s. So there are certain mafia-based characters - all true characters - which come up in the show. It’s one of those shows that men bring their girlfriends and wives to – it’s a male date show, more so than the girls dragging their husbands along. It’s because of the songs that Bob wrote. The Beatles and The Rolling Stones at the time were writing songs about love for girls, whilst the Four Seasons were writing songs about girls for guys. They’re also blue collar songs or songs for guys going off to Vietnam.”

Were you aware of the Four Seasons previously?
“Maybe the first time I heard their stuff was Dirty Dancing, but before I saw the show if you had said Frankie Valli and the Four Seasons I wouldn’t have been able to name any of their songs. When I saw the show I realised that I actually knew quite a few of the songs. I think that’s what most people find. They didn’t feel that they knew any of the music – except maybe for the really big hits – like Sherry, Walk Like a Man and Big Girls Don’t Cry – but you get into Dawn, Marianne, Who Loves You and Working My Way Back to You.”

What is it about the music of Frankie Valli and the Four Seasons that grabs you?
“For me a lot of it is the quality of the writing. If we’re talking about the original songs and the original recordings, Frankie’s storytelling with his voice – to emote and to get across the story of what’s happening. It’s the writing, and then it’s Frankie’s voice.
“Frankie is still performing – he does something like a hundred shows a year – in his early 70s. He’s a really wonderful guy.

You mentioned taking the advice about rest away from your meeting with Frankie Valli. What else did you take away from meeting Frankie?
“I think it was just the really laid-back situation. For me I just wanted to feel what his energy was like – what he was like as a person. He’s a very charming guy – he’s a showman – he’s been on stage all his life. Being on stage is his home, so he’s very charismatic; he knows how to handle talking to people – talking to ladies.
“After meeting him I recognised a lot of myself in him, and made me feel great. I can bring a lot of myself to the role. I won’t have to be doing an impression of Frankie.”

This interview with Bobby Fox was originally published in the July / August 2009 issue of Stage Whispers.