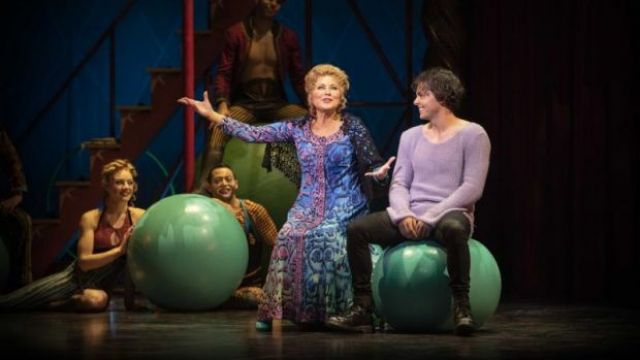 Kerri-Anne Kennerley has fallen to the stage from a swinging trapeze, during the musical Pippin at the Sydney Lyric Theatre overnight.

In a statement released by the producers of the musical: "She finished her song, and was taken to hospital afterwards where it was confirmed she had broken her collarbone and sustained a chip to a bone in her ankle. This injury means that Kerri-Anne will be replaced by an understudy for the time being."

Kerri-Anne said, “Pippin has genuinely been one of the great experiences of my life, exceeding all my expectations. I love the show and performing every single time. The cast have always been supportive and now more than ever. What happened is just a random misstep in the trapeze and circus world. I’ve always felt safe in their hands but accidents just happen.”

The role she was playing was Berthe - the grandmother of Pippin - which required her to swing upside down, held by the legs by another performer approximately four metres above the stage.

In my review of the musical I (David Spicer) wrote that Kerri-Anne Kennerley "produced one of the most surprising moments of music theatre I have seen. Her singing was OK, but goodness up on that swing she provided the audience with bucket loads of entertainment. Picture this - 67-year-old up on the swing upside down – held by her ankles by a muscle bound gymnast. The dance captains underneath poised like wild cheetahs, waiting to pounce, not on a deer – but to catch her if she fell off."

The season continues until the end of January.

See Kerri-Anne Kennerley and the rest of the cast on Stage Whispers TV.