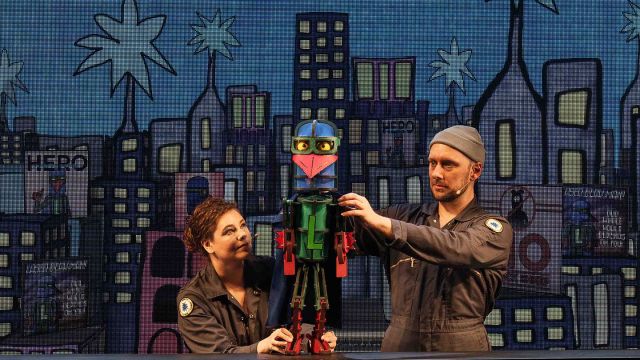 How would you describe the artwork of Tim Sharp which inspired the production?

It is quite electric, very bright, inspiring and unusual. Tim has a distinct style.

He has an interesting background.

Yes, he is the same age as me but he has autism. His Mum found artwork as a way for him to express himself in his early years. Now he is a legendary artist in his own right.

How do you communicate with him?

He is quite verbal. When he was younger, he wasn’t. If you ask him questions, he will respond like anyone.

Does his perspective on life have a special connection with young children?

I think he has a special connection with everyone. He’s such a joyful, grass is always greener sort of guy. It is equally inspiring to adults. You can’t look at his artwork and not feel inspired. When you talk to him there is not an ounce of negativity. He just smiles.

How is the narrative informed by his artwork?

What is the core story?

Laserbeak Man is a superhero with a bit of a difference in that he has the ability to turn bad things into good things. The core of our story is a place called Power City that is under destruction. He does what he can to save the city and his friends.

What are the puppets made of?

All of our puppets are designed on computer and cut on laser. We use plywood and aluminium. All the pieces come in an Ikea-like flat pack.  So (if one gets lost or damaged) any time we can make some more.