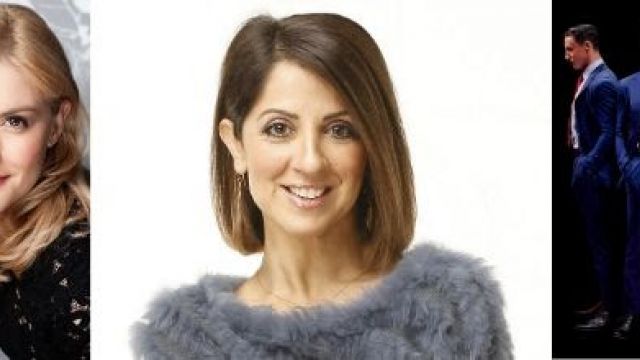 Lucy Durack, Silvie Paladino and the cast of American Psycho – The Musical will entertain viewers of Episode 4 of live variety digital show, Arts Centre Melbourne’s Big Night In with John Foreman on May 20 at 7pm.

Lucy Durack has fast become one of Australia’s leading ladies of stage and screen with a list of major roles including Glinda in the original Australian cast of Wicked and Elle Woods in Legally Blonde The Musical, for which she won both the Sydney Theatre and Helpmann Award and Princess Fiona in Shrek the Musical. She played Sophie in The Letdown (Netflix/ABC) and was one of the judges on Australia’s Got Talent. For the interview with John she will be joined by her husband Christopher Horsey, Australian entertainer, director, choreographer (Hot Shoe Shuffle, Tap Dogs).

Singer Silvie Paladino, well known to Australian audiences through her regular appearances on Carols by Candlelight, has toured nationally with her own show, sung with symphony orchestras around Australia and performed for celebrated theatre composers Stephen Sondheim and Stephen Schwartz. This week’s show will conclude with a performance by Paladino, who will be joined (virtually) by the Aussie Pops Orchestra.

The cast of American Psycho –The Musical, who were scheduled to perform at Arts Centre Melbourne before COVID-19, will join John for a song and interview with lead actor Ben Gerrard.

Arts Centre Melbourne’s Big Night In has recorded more than 26,000 views on the first three episodes, plus more than 150,000 views of the three Aussie Pops Orchestra finale songs across social media. Singer Ricki-Lee’s performance of  ‘What the World Needs Now’ with the orchestra on this week’s episode has had more than 16,000 Facebook views. Audiences can also watch the song on You Tube here.

Arts Centre Melbourne announced on 15 March the cancellation of all scheduled performances and events and temporary closure of its buildings to the public due to COVID-19. Now Arts Centre Melbourne is focussed on finding new ways to engage with audiences, including the digital online hub – Together with You.