Mamma Mia! - Andrew Lloyd Webber has just asked me to sing one of his songs. 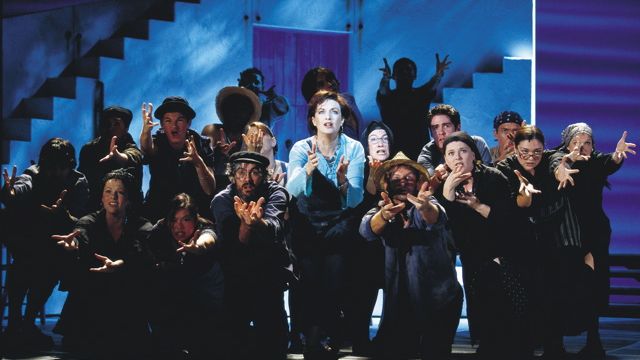 Music Theatre star Michael Cormick has returned to the Australian stage as Sam in the 10th anniversary production of Mamma Mia! On the eve of commencing rehearsals, he shared scariest moment of his theatre career with Stage Whispers.

When Michael Cormick was 24 he turned up in the West End to chance his arm on the great stages of London. He auditioned for both The Phantom of the Opera and Les Miserables. The singer was offered a lead role in both and would ultimately choose the plum part of Raoul in The Phantom of the Opera.
However, before he got the good news, the producers asked if he could sing a song for Andrew Lloyd Webber.
“I was told to go to his house in London. His assistant opened the door and inside was Andrew Lloyd Webber, with twelve other people sitting around,” he said. “My legs were shaking. I was fresh off the boat and thought, what am I am doing here?”
Still thinking this was part of the audition process, it was understandable that he was more than a little nervous.
“He then went through his songs and kept asking me if I knew them,” he recalled. “Again and again I said no. I just wasn’t into Andrew Lloyd Webber music at the time.”
The tension only eased when the composer found a few new songs and asked Michael to learn them.
“It turned out I was there because he wanted to hear someone sing a few songs from his new musical Aspects of Love,” he said. “I was the first person to sing some of those songs. Years later I asked him about my embarrassing moment – but thankfully he couldn’t remember the incident.”
For his current role as Sam in Mamma Mia! there is no such tension. While the original creatives had to approve his casting, thankfully they have done it long distance.
Sam is the role played by Pierce Brosnan in the movie version of the Abba jukebox musical. Michael says he enjoyed Brosnan’s acting.
“I loved his tongue in cheek irony,” he said
While he is reluctant to compare himself to the movie star, he is confident of being able to sing better.
He describes the experience of seeing Mamma Mia! as a great night out where you don’t have to think much and can enjoy the music.
“I remember seeing the opening night in London ten years ago, and I remember by the end of the night I was standing up and really enjoying it,” he said.
Michael first caught the Abba bug when he was 14 and bought an album. A few years later he was on the way to stardom.
A talent scout spotted him singing in a church and he was invited to perform on the television series New Faces. He came first, and later also had a win on Young Talent Time. Soon he was asked to audition for the original Australian production of Cats and the rest is history.
Over the years Michael has tackled some Herculean roles. When he came back to from the West End he scored the role of the Beast in Beauty and the Beast.
“It nearly killed me. It took two hours to get into costume and make up for the performance. I did it eight times a week for three years,” he said.
Compared to that Abba songs would seem a sinch. But he says even if the role is lighter, great discipline is needed.
“This is not a stroll in the park. It takes energy to be on stage no matter how small the role,” he said.
Michael is looking forward to being in a commercial hit again – after a few misses.
I last saw him on stage in the West End production of Andrew Lloyd Webber’s musical The Woman in White in 2005. The musical had a strong narrative, but the music wasn’t as popular as the composer’s normal fare. It ran for 19 months in the West End, but closed after three months when it opened on Broadway.
His most recent West End outing was in the imported French musical Romeo and Juliet. It closed in February after nine months. Critics labelled it ‘bland and boring.’ Michael says he loved the music but sadly the Eurovision style didn’t take off.

Mamma Mia – returning to Australia for its tenth anniversary - is unlikely to meet the same fate.