Mary Poppins Flies Back Into Sydney In 2022 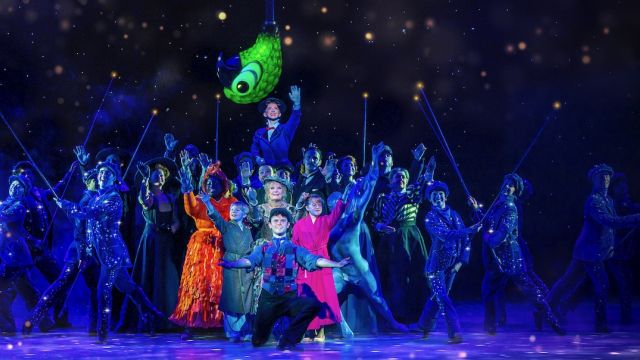 Cameron Mackintosh and Disney have announced that their Tony® and Olivier Award-winning production of Mary Poppins will open at the Sydney Lyric Theatre in May 2022.

Featuring the beloved quintessentially English magical Nanny, Mary Poppins has been seen by over 12 million people worldwide and was the winner of 8 Helpmann awards in Australia in 2011.

A nation-wide search for Australia's Mary Poppins began today (May 19, 2021), with the full Australian cast to be announced later tin the year year.

Tickets for the Australian production will go on sale in August 2021. To receive the most up-to-date information about the production, sign up to the waitlist at MaryPoppinsMusical.com.au Co-creator and Producer Cameron Mackintosh said of the announcement:

“Mary Poppins flew into my heart when I first saw the movie and read P. L. Travers’ unforgettable books as a schoolboy. My long-held dream of creating a stage musical out of her work started in Sydney over 25 years ago after Pamela had entrusted me to write a first treatment which was enthusiastically embraced by Tom and Disney. Since then, Mary has soared triumphantly around the world with the Australian production over 11 years ago being one of the finest. So, I am thrilled to be bringing my latest current hit London production of Mary back home to Sydney next year, following my upcoming production of Phantom of the Opera, and finding another stella cast to spellbind a new generation of theatregoers.”

"This is a long-overdue homecoming for Mary, whose creator P. L. Travers was born and raised in Australia," said Thomas Schumacher President & Producer Disney Theatrical Productions. "No region on the planet has embraced this gorgeous production more than Travers's homeland and, under the loving care of Michael Cassel and his team, we know that number 17 Cherry Tree Lane will be as enchanted as ever. Cameron taught all of us about importing large-scale shows to Australia and he and I have witnessed firsthand the explosion of Australian musical theatre talent over the decades. We cannot wait to see your magnificent performers imbue this beloved tale with heart, warmth and wit."

Born in Maryborough, Queensland before moving to Bowral in New South Wales at a young age, Travers published 8 books featuring the quintessentially English and loveable magical nanny, Mary Poppins. And as told in Valerie Lawson’s biography, Travers was a poet and a world-renowned author whose love of mysticism and magic shaped both her life and the character of Mary Poppins.

The original music and lyrics by Richard M. Sherman and Robert B. Sherman include the classic songs “Jolly Holiday”, “Step in Time”, “Feed the Birds” and “Supercalifragilisticexpialidocious”. New songs and additional music are by the Olivier Award-winning British team of George Stiles and Anthony Drewe. Book is by Academy Award®-winning screenwriter and Downton Abbey creator, Julian Fellowes and this production is co-created by Cameron Mackintosh. The producer for Disney Theatrical Productions is Thomas Schumacher. This production of Mary Poppins has orchestrations by William David Brohn with dance and vocal arrangements by George Stiles. It has a new sound design by Paul Gatehouse and new lighting by Hugh Vanstone and Natasha Katz. Co-choreography is by Stephen Mear. The reimagined set and costume designs are by Bob Crowley. Co-direction and choreography is by Matthew Bourne and direction by Richard Eyre.

The stage production of Mary Poppins originally opened in the West End in December 2004, running for over 1,250 performances. During this time, the production won two Olivier Awards and an Evening Standard Award. Subsequently the Tony Award® winning Broadway production ran for over six years.

This brand-new production of Mary Poppins is produced in Australia by Cameron Mackintosh, The Walt Disney Company Australia and New Zealand and Michael Cassel Group.

The Australian premiere of Mary Poppins is supported by the NSW Government through its tourism and major events agency Destination NSW.