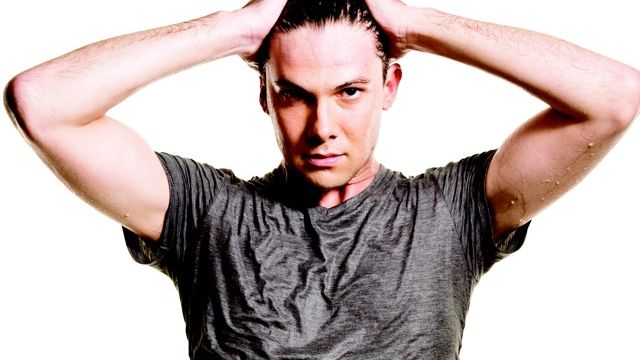 Toby Schmitz talks candidly to Emma Bell about acting, writing, directing and that promotional shot for his role as Hamlet for La Boite theatre.

"I think it's about bums on seats isn't it? There's a lot of sex in the play … they use it (sex) to sell chocolate bars and I don't see why theatre should be any different." Schmitz says in relation to his promotional shot for Hamlet or 'Hamwet' as some of his "chums" are saying. He goes on to say, "I do like something about the image. The guy doesn't seem all together with it. There's something deconstructive and non-princely about him; he looks like he's trying to hold his brains in and why is he soaking wet as opposed to being in his court clothes and being Hamlet? It doesn’t look like the sort of image that you'd see at a Royal Family dinner. I suppose there's something in that as well."

It's easy to warm to Toby Schmitz; his down to earth, charismatic energy is immediately engaging and also thought provoking. A week and a half into rehearsals for Hamlet, Schmitz candidly shared his thoughts on being a triple threat - a "daggy" director and "aiming for Orson Welles."
Toby Schmitz has been an in demand actor since his graduation from NIDA in 1999. He has performed in a string of plays including David Williamson's The Great Man, Andrew Upton’s Hanging Man, Tony McNamara's The Great, Brendan Cowell’s Ruben Guthrie, Louis Nowra's The Boyce Trilogy, Tom Stoppard’s Travesties and Hamlet.

"I'm very aware at the moment of the size of the undertaking (Hamlet); I suppose I've always been aware of the significance of the part, how good it is. Now that I've stepped into it, it's all been confirmed; that it is an important part and a very good part. So I'm slightly in awe at the moment," Schmitz shares.
Playing a part such as Hamlet requires an authenticity from the actor and a willingness to touch on elements of his own life and identify with the character.

"Kind of the key to getting some truth into your acting is to find the part that you can relate to personally but there are a whole lot of things about Hamlet that none of us will ever experience; he's a member of royalty and so on. Also the wonderful mighty opposites; in parts there's a kind of leaning in from the audience going, 'Man, imagine what it would be like to be a prince, who is sword-fencing and going out with the hottest girl in the court' and the other half (of the audience) are going 'Oh man, I know exactly how that guy feels.'"

Schmitz is back working with director David Berthold, who is also Artistic Director and CEO of La Boite Theatre. Berthold directed Schmitz over three years when he played Luke Boyce in the The Boyce Trilogy.

"Luke Boyce was a wonderful run up for Hamlet. I'm really happy that I got to do it. The character of Luke Boyce was a sort of unfolding tragedy with even a dash of hope at the end."

On Berthold he says, "I feel that he's very much a contemporary of mine. He paces and leads and he can speak differently to different actors. He is also one the most patient directors."

Straddling acting, writing and directing, Schmitz is a triple-threat. His directing work has included Neil LaBute’s This is How it Goes and Howard Korder’s A Boy's Life. Adopting his 'director hat' Schmitz says, "My instant knee-jerk reaction to directing is to maybe cast myself as the daggiest, most babbling person in the room, so everyone else can feel confident that at least they're not that person. Letting them (the actors) feel free to be pretty daggy and make mistakes is important," he states with a chuckle.

As a playwright, Schmitz has penned dreamalittledreamalittle, Capture the Flag, Lucky (for which he won the lion's share of the Patrick White Playwrights Award in 2002), Cunt Pi, This Blasted Earth, Pan, The Best Hotel in the Dam and  Chicks will Dig You, for which he was the recipient of the Australian National Playwrights' Centre/New Dramatists Award amongst others.

In talking about encompassing all elements of the theatrical process, Schmitz says, "They dovetail and inform each other and enrich each other. Any theatre practitioner is kind of a triple threat; it's such a collaborative process that you end up doing writing and edits on nearly any new work."

Delving into who his influences have been he explains, "I was a huge fan of Mamet and Howard Korder when growing up. I've always been very Anglophilic; the great lineage of British comic or satirical writers, who are therefore very serious writers, from Middleton to Sheridan to Wilde to Pinter. Ones with a comic edge - Orton and Stoppard - those are the ones I feel most attached to, but I also like to explore as much as I can."

Schmitz says of his future, "One direction that my writing seems to be taking me is the exploration of the possibility of historical settings. I wrote a play a couple of years ago called Capture the Flag, set in the last days of the Second World War in Berlin. A wonderful metaphor was set up. As soon as you go back in time and set it somewhere else, the audience cannot help but compare it to now, so you've got this quite effortless conversation going on.  I'm a bit of a history buff, so I've just completed a few years work on a play set on an ocean liner in the 1920s, which is sort of part murder mystery, part gothic horror and part a drawing room comedy."

By way of contrast he says of his work, "Another level is taking me to slightly more frugal areas of theatre. I'm trying to write the ultimate 4-hander, middle-class, kitchen-sink, set around some white sofas, which always kind of generates some interest from the main stage companies.

"The interesting thing is what theatre can sustain. The ocean liner seems to me to have a really good metaphor, whereas the other type, which we see lots of now, is just two middle-aged couples thrashing out some dilemma. You have to look for the smallest thing, the tiniest thing, to tell you about the play and that’s a totally legitimate and interesting form of playwrighting as well. The metaphor isn't obvious - you have to go searching for how these people are like you."

Schmitz shows his comical edge when he tells me about how commencing work on a new play and production is, "almost a new art form; almost like having a different meal. A good play redefines what theatre is; a good meal redefines what eating is … and then underneath it all, the common thread is entertaining the audience and can we stop them from scratching and yawning."

Schmitz has also been involved in his fair share of film and TV work, including the upcoming film Griff the Invisible. He plays the role of Tony, which he says is a "wonderfully warming, romantic comedy, with the superhero elements thrown in. I found the first reading deeply funny and deeply moving, then I had great fun for a week and a half playing the office bully who's not really even very good at bullying. I had a ball."

Schmitz's aims have no boundaries, and why not have it all? After all, if you've got the looks, talent and desire, what's stopping you? He articulates this notion saying, "It's hard to define. It's what you want eventually I suppose - I want to be an auteur. I want to do a bit of everything. What's wrong with sort of aiming for Orson Welles, or, you know, a Spielberg? It's just about the megalomania I suppose. Having a bit of both (theatre and film) is wonderful. Keeps you fairly honest, and audiences are often the same. Whether they've paid $20 or $120, you know, the same rules apply - stop them scratching and yawning."

So what does 2010 hold in store for Toby Schmitz?

"No plans. It's such an ephemeral job. I'm unemployed in 2 months time, so I'll probably generate something that'll cost me a bit of money but at least I'll be acting."

I'm sure it'll be a project to entertain, inspire and enlighten us, so we avoid the urge to scratch or yawn!

Emma Bell is a Sydney based theatre lover and writer. She is also a presentation skills trainer and can be found at www.emmabell.com.au

Originally published in the March / April 2010 edition of Stage Whispers.