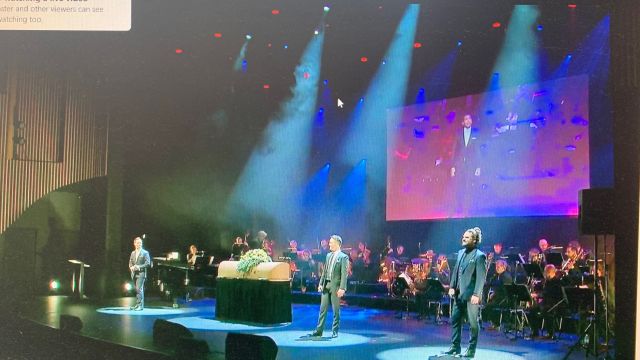 Michael Falzon has been given a spectacular show business farewell with songs and tributes from family, friends and colleagues.

The much loved 48-year old tenor and producer died in June of a rare form of cancer.

A memorial service was streamed live from Sydney's Coliseum Theatre (Friday July 10) with a full orchestra.

The celebration commenced with three members of the ensemble Michael led Swing on this  (Ben Mingay, Matt Lee and Luke Kennedy) singing under spotlights alongside his casket - with file footage of Michael singing chiming in on a big screen.

A euology was delivered on behalf of his family by his brother.

"The choir of angels now really know how angel songs should sound."

"Don't let his death diminish your inspiration. You will screw up auditions, stuff up productions... you will learn and continue to move forward. Keep pushing and your success will be part of his legacy."

Mourners heard that he first started singing at the age of four, won an eisteddfod after just a few lessons at the age of 12, and his big break came when cast as the lead in the musical We Will Rock You.

Producer Torben Brookman spoke of the late singer as "brash, confident and charming. The ultimate negotiator all delivered with a cheesy grin."

One of the doctors, who treated Michael, told the memorial that he suffered from a rare form of germ cancer and had to undergo multiple bouts of surgery, chemotherapy and advanced experimental treatment. 'It was tackled with positivity he was always smiling and joking."

Singer Luke Kennedy said when the singer had to go into a chamber to undergo an invasive laser treatment he was warned by nurses to stay absolutely still. The procedure was expected to last up to an hour - but he came out just twenty minutes later.

"I smashed it," he recalls Michael saying after the treatment.

"No matter what the occasion he was always determined to perform to the best of his ability."

Michael's widow Jane Cho said he wanted his funeral service to be "joyous and uplifting".

She thanked all participants for allowing him to him to have 'top billing, one last time."

The family has asked for donations for future cancer research.

Donations can be made at donate.mylifehouse.org.au/tribute/michael-falzon.