Mother Africa – Circus of the Senses 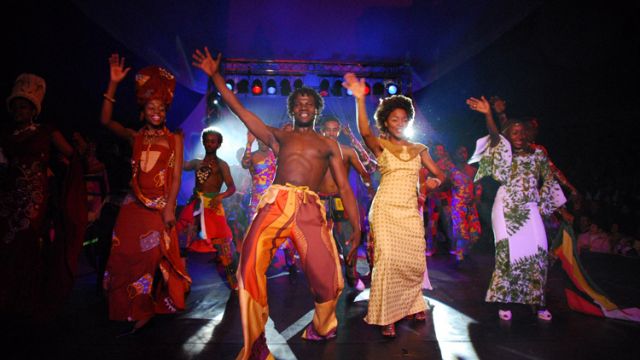 Mother Africa is a growing global circus phenomenon that is ironically yet to debut in its own country.
Matt Byrne reports on, and reviews, the show, currently touring Australia.

Created in Germany by producer/director Winston Ruddle, this unique concoction of eye-popping circus acts, backed by live music with an African heartbeat, is still looking forward to a chance to perform in Africa.
But according to stunning South African singer and co-choreographer Sibongile Mtshali, who also hosts the evening, that is not surprising.
“Africans see the music, dance and the physical feats we do as part of daily life,” Sibongile says.
“There are not many African circuses, which is what makes what we do quite unique.
“Africans would rather go to a club or do other things.”
But the world sees Mother Africa as a brilliant showcase of spectacular circus entertainment.
The combination of spectacular stilt work, outlandish acrobatics, spine-bending contortionists, exceptional adagio and brilliant balancing has proved a wonderful insight into African culture.
The acclaimed hi-octane circus has conquered Europe, and Australians, it seems, can’t get enough.
Mother Africa enjoyed an extended sell-out season up at Jupiter’s Casino on the Gold Coast, followed by a season at Her Majesty’s Theatre in Adelaide during August. Canberra, Sydney, Melbourne and Perth seasons follow.
“We were supposed to have a three week season at Jupiters and then go home before the Australian tour,” Sibongile - better known as Bongi - says.
Zimbabwean singer/dancer Silethemba Magonya says the alliance of performers from seven African countries has created an African family.
“It’s like a home away from home for us,” she says.
“We have performers from Tanzania, Ethiopia, Kenya, Ivory Coast, Zimbabwe, Guinea and South Africa.
“It has been a great experience to get to know performers from so many different African countries, with different languages and traditions.”

Review
Mother Africa is an holistic approach to circus and African culture.
Producer/director Winston Ruddle has blended music, muscle and colourful hustle to highlight the physical talents of his amazing troupe.
The show’s daring design and costumes are eye-catching and create a joyous atmosphere to involve the crowd and keep the evening moving.
Music Director Roy Figueiredo on bass, and his Tanzanian band, provide a lively foundation for an array of ebony excitement.
Ethiopia's Teame Ersie is a contortionist who is almost part spider and at least a quarter crab. Not only is he able to twist his body into unbelievable shapes, but he literally scuttles across the stage as fast as we would walk upright.
His body bending cohorts, Kenya’s Lazaraus Mwangi and Tanzania’s Hassani Mohammed, resemble the superb snake costumes they wear.
Pint-sized young Ethiopian Yonas Alemu has personality to burn, as he is rapidly flipped on the fabulous feet of Tariku Degefa.
Tanzanian Ibrahim Tulwo’s Rolla-Rolla balancing act could and will play anywhere in the world as he drags you to the edge of your seat wondering just how he manages to stay atop the mobile stack of cylinders.
There are some fabulous songs from trio Silethemba Magonya, Nomathamsanqua Mkwananazie and Sibongile Mtshali, courtesy of composer Figueiredo.
Mtshali also makes an irresistible emcee for the evening, as she encourages the audience to sample the range of African delights on offer.
There’s a joy about watching these performers, which proves as infectious as the music as the show progresses.
Forget the well-practised professional smiles and stunts often seen in circus elsewhere, this tremendous troupe live every moment.
Mother Africa has a spirit and energy that other higher-priced global circus corporations could do well to remember.
Let’s hope Africans will one day realise what they have inspired and welcome it to their shores.