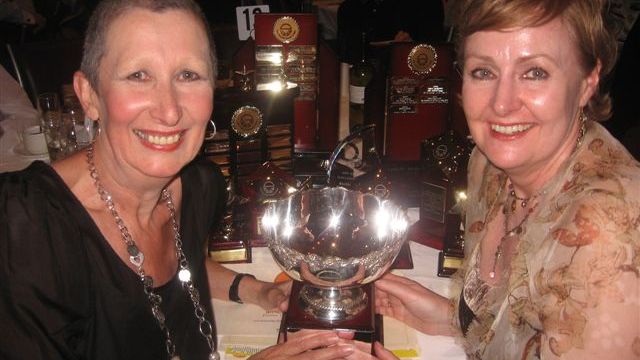 The play was called W;t – but it dealt with the most harrowing of subjects … cancer.
A stunning production of the play by the Encore Theatre (from the Melbourne suburb of Clayton) picked up eight awards at the Victorian Drama League’s night of nights in early December. The awards including Best Drama, Best Director, Best Play, Best Leading Actress, Best Supporting Actor and Actress, Best Actor in a Minor Role and Sound and Lighting awards.

Pictured here are the lead actress Juliet Hayday and Director Vicki Smith with their silverware.

Director Vicki Smith told Stage Whispers the play W;t by Margaret Edson is an intellectual and important piece of writing.
“It deals with a woman who is professor of English literature specialising in John Donne. She is dying of Ovarian Cancer and she relates the poetry to her illness,” she said.
“A lot of people could connect to it emotionally. You are seeing a person before your eyes who is dying of cancer, dressed in a hospital gown and with a bald head from chemotherapy,” she said. “The writer based the play on her experiences working in an oncology unit in a hospital in America. She describes the clinical experiences in the hospital where the doctors and nurses are there to perform a job, but don’t necessarily form an emotional connection with patient.”
“It was a similar experience for the central character as a patient and as a teacher, where she didn’t have any emotional connection to her students. She revealed what was lacking in her life,” she said .. "We didn’t win any staging awards."
“I like minimalist plays. I like a basic setting. In this case we didn’t have any set at all, just furniture with black curtains, moving from one scene to another and no interval,” she said.
“It is quite a confronting play but the ending for me, is quite uplifting,” she said.
Best Comedy Play was won by the Geelong Repertory Theatre Company. Its production of The Popular Mechanicals picked up four awards including Best Director, Supporting Actress and Actor.