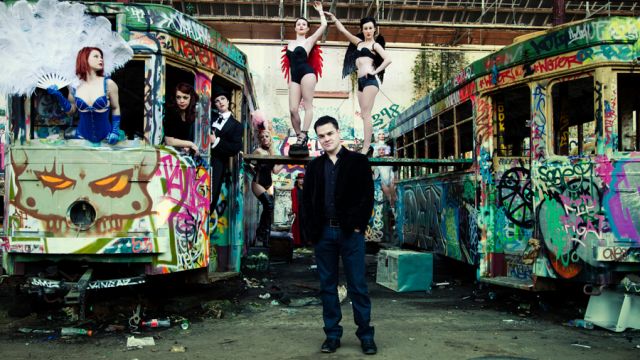 Kris Stewart arrived in New York, a young Aussie director with a passion for musicals, and within a few years was dubbed by The New York Times as the theatrical ‘rookie of the year.’
The home run which he scored was founding the New York Musical Theatre Festival.
“I was working for the non-profit National Music Theatre Network, which was finding it harder and harder to pay the bills. I suggested instead of getting smaller, why don’t we try to quadruple the size of the organisation overnight?” he said.
“A lot of people in the first year didn’t think it would happen. We found people liked the idea and came towards it. Just like with the new Sydney Fringe, sometimes you need to say these are the dates, these are venues – then you get hundreds of things that come in.”
As Executive Director of NYMF, Kris Stewart oversaw 1197 performances of 133 new musicals. They ranged from hip-hop and freestyle rap to dance musicals, from traditional musical comedies to edgy satires to epic dramas.
“The hardest thing for writers is to self produce, but getting things off the ground is what festivals do,” he said.
A number of shows cut their teeth at the Festival in the first two years.
Altar Boyz was ‘discovered’ at the inaugural Festival. It transferred to an Off Broadway venue in 2005, and went on to become the ninth longest running Off Broadway musical of all time.
Next to Normal was given vital exposure at the second festival. It opened on Broadway last year and won the Tony for Best Musical and Pulitzer Prize for Best Drama.
Another musical, [title of show], is all about actually writing a musical to enter in the Festival. Kris Stewart became one of the original producers of [title of show, which became an Off Broadway hit, then subsequently played on Broadway.
The musical Yank, staged at the 2005 festival, is now about to transfer to Broadway.
“Yank – one of my most favourite shows, such a beautifully written musical.”
He said the festival is extremely helpful because producers aren’t necessarily great readers and most new musicals are ‘terrible.’
“What NYMF does is take 250 submissions, choose the one in 20 that went on to the Festival and then maybe one in ten of those are useful,” he said.
Kris Stewart has now been back in Australia for eighteen months.
“I miss New York every single day. When I was in Hobart with Stephen Schwartz at a musical theatre forum, I felt that working with writers with that level of talent is hard in Australia. If you are talented in Australia you will be talented in New York, but there is more of a community there,” he said.
To help Australian musicals get off the ground, Kris Stewart is now leading a new organization called New Musicals Australia.
It will provide creators of new musicals with a series of professional workshopping opportunities for their work to be developed and publicly presented.
“I think it’s clear that there have been a number of structural gaps and issues in the sector of new music theatre development in Australia, and this is a chance to throw talent and resources at getting more musicals off the ground,” he said.
What brought Kris Stewart back to Australia wasn’t a new musical, but a Broadway hit. Eighteen months ago he was appointed the resident director of Wicked.
After selling more than one million tickets in Sydney and Melbourne, Wicked will open in Brisbane in January and Adelaide in April.
The job of being resident director means, in this case, to follow the Broadway franchise.
“Wicked has been very successful and we stay very respectful of that. [My job] was to make it the equal or better of a Broadway experience,” he said.
But Kris Stewart says there were some Aussie bits that he ‘snuck’ in.
“There is a substantial difference in Lucy Durack’s interpretation of Glinda. There is a lot of business in the show that Lucy invented,” he said.
Then of course there is Bert Newton’s interpretation of the Wizard. He is sure Bert did not read the New York Wicked manual.
“Bert is Bert - you play to his strengths,” he said with a grin.
“A lot of this is about playing to the strengths of people. Having seen it overseas, it feels different here. I think Broadway stages are cleaner, while the staging here is more truthful and raw. I think Australians call bullshit more, we laugh at different things and naturally performers know this and respond to it,” he said.
Kris Stewart’s latest challenge is launching the new Sydney Fringe Festival, which runs from September 10 until 26.
It will be smaller, in terms of the number of acts, than the big ticket Edinburgh or Adelaide Fringe Festivals, but it will have variety of art forms on offer.
The focus of the 300 productions and exhibitions includes theatre, visual arts, music, comedy and digital arts.
When you think of Sydney, the glittering harbour and the Sydney Opera House come to mind.
For the Sydney Fringe it is less glamorous. “If you put it on, it has to be in the inner west, as the suburbs of Newtown and Marrickville already have music and energy,” he said.
One of the hubs will be The Hub. It is an old cinema on King Street, Newtown, that used to be known for porno movies and hasn’t been used for fifteen years. Other venues are being spring cleaned and dusted off.
There is even a mystery bus, which takes you to underground venues including the odd backyard gallery.
“Sydney will never be known for its Fringe (like Edinburgh),” ris Stewart said, “But I want it to be known to have an excellent Fringe Festival which showcases what is on the edge of contemporary culture.”

Reproduced from the September / October (current) edition of Stage Whispers. Visit the Store section of this website to purchase a copy or subscribe.

Read about Fringe productions in our Q & A with Fringe creatives - a new Q & A every day. www.stagewhispers.com.au/news/sydney-fringe-q-a