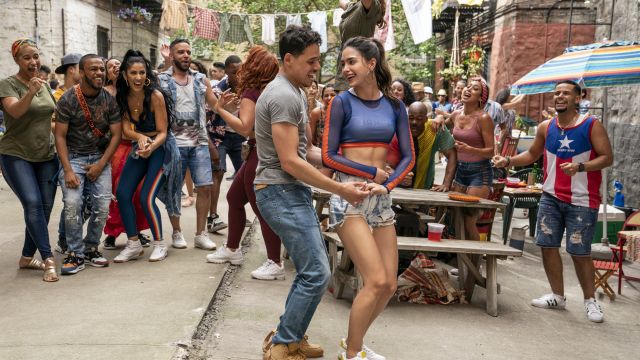 Image: In The Heights

With a batch of blockbuster musicals being released as movies, Coral Drouyn looks between the sheets at the marriage of screen and stage.

It’s here. Summer has returned to an Australian winter in the form of the film of Lin-Manuel Miranda’s In the Heights. You can almost feel the warmth of the summer sun in Washington Heights, and the plethora of bright colours (including skin colours) is dazzling to the eye. It’s a joyful affirmation of life and dreams and belonging and family - but so are most musicals, aren’t they? Some would say it’s not the job of a musical to be edgy or to make one think, though ultimately Miranda has managed to tickle our minds into forming opinions on social injustice, idealism and the importance of family. However, its primary job is to entertain, and the film deserves a thousand awards for that alone.

It’s a year for Broadway on screen, with Dear Evan Hansen on a large screen showing that Ben Platt (at close range) looks too old for the role (he’s 27!), Spielberg’s West Side Story (don’t we already have the classic version on film?) and tick, tick...Boom! with Lin-Manuel Miranda directing (the man is HOT and capitalising on it). There were plans for a film of Come from Away, but fortunately common sense prevailed and now there will be a filmed version of the stage show (did anyone want to see 7,000 extras crowding an airport?), which is intimate and innovative and the antithesis of big screen musicals. And the rumours abound that The Drowsy Chaperone will hit the big screen next year, along with Fun Home starring Jake Gyllenhaal.

Ultimately it raises that age-old question - should musicals be confined to the theatre, or opened up to achieve their potential on the big screen? Purists will claim the former - that theatre provides an intimacy, a willingness to suspend disbelief that can’t be found on a big screen; that every performance is different, and the audience is a participant rather than an observer. Others will claim that Broadway is just a stepping-stone to the big screen, where anything can happen on a twenty-foot-high screen, and a musical can go places in celluloid reality that we can only imagine within the limitations of a theatre. The fact is both are valid. The reality is it depends on the musical – and the timing.

Musicals on screen tend to peak at the times in history when we need them most. During the depression musicals were created for the screen rather than Broadway. Most musicals are a feel-good experience and an escape from the misery of the real world for an hour or two, and that’s certainly the case in a pandemic. The Thirties made film stars of people like Fred Astaire - who had appeared on Broadway in such musicals as Lady, Be Good and The Band Wagon, but is remembered for a huge list of film musicals. Judy Garland in The Wizard of Oz is still watched by kids of all ages today. It is timeless. And that went from screen to stage.

After the World War Two, and right into the Cold War, musicals once again provided an escape valve from the stress around us. Some screen musicals came from the stage; some originated on screen and then were adapted for the stage. So, the Golden Age of Musicals gave us such gems as Showboat, Gentlemen Prefer Blondes, On The Town, Damn Yankees, Gypsy (stage to screen) and Seven Brides for Seven Brothers, An American in Paris, Singin’ In The Rain, Gigi (screen to stage). These days, of course, it’s more likely to be Disney movie musicals that are adapted to the stage, attracting an increasingly younger audience, much as pantomimes used to entertain us adults when we were kids, but far more elaborate.

It took Rodgers and Hammerstein to turn the movie musical into a stellar event, and almost all of their musicals are equally at home on both screen and stage. Let’s face it, few of us know that Mary Martin was the original Maria in The Sound of Music, but even mention the title anywhere in the world and we all conjure up an image of Julie Andrews on a hilltop, arms flung wide, telling us “The Hills are alive…”, when most of us didn’t even know they’d been sick!

Their musicals were smash hits on screen, which led to additional productions on stage, which again publicised the films. It was a musical merry-go-round - or should I say carousel? The list includes Oklahoma!, Carousel, South Pacific, State Fair (twice filmed before its less than stellar stage versions), The King and I and The Sound of Music. Their one “flop” (or least successful) stage to screen adaptation was Flower Drum Song, a pity, because so many lovely songs (“Love Look Away”, “A Hundred Million Miracles”, “Sunday” and, of course, “I Enjoy Being a Girl”) have been lost to lovers of musical theatre. Interestingly, their Cinderella was written in 1957 for the small screen of television (the first of 3 TV versions, it starred Julie Andrews) and only later made its way onto the stage. The new Broadway production will reach our shores in 2022 - on stage of course.

The Sixties bought smash Broadway hits like West Side Story, My Fair Lady, Hello, Dolly! and Funny Girl to the screen and introduced us to Barbra Streisand as well as Julie Andrews, then followed with the age of Fosse. We were blessed with Cabaret and Sweet Charity, and a British ring-in, Oliver!, which proved that a good musical is a good musical no matter where it comes from. At the other end of the scale a fairly average 1971 Broadway hit called Grease became a big screen blockbuster in 1978 - which led, in turn, to a rewrite of the stage show and far more productions than most of us wanted to see.

By the Eighties we had film versions of gems like Annie and A Chorus Line, while by the end of the century the mega musicals had taken over the stages and ultimately the big screen. The Phantom of the Opera, Evita and Les Misérables are the classic examples of musicals that benefitted from being opened up fully on screen, allowing full exploitation of settings and grandeur. On the other hand, more recently Cats, one of the world’s longest running musicals, proved a total disaster on the big screen and a classic example of musicals that should have been left alone (who wants waving tails and twenty-foot-high puss bottoms in their popcorn?). Sondheim made it to the big screen (again) in the new century with Sweeney Todd and Into The Woods, the latter considered by stage (and Sondheim) fans to be over-produced at the expense of the complexities of the story. But the screen also gave the stage Once, while Broadway sent Hairspray and Chicago to the multi-plexes.

So, while we can look forward to Sunset Boulevard (screen to stage and back again) and a remake of The King and I (why?), what musicals of the 21st century will thrive on screen and which should be left to the stage.

I certainly hope they don’t film The Book of Mormon - I like its almost cartoon quality and it could work if animated, but if based in a realistic screen setting it might be too offensive even for me. Also, I for one don’t want to see a realistic, panoramic Hamilton - with the lead character on horseback rapping ‘Wait 'til I sally in on a stallion with the first black battalion’.  Much like Come from Away, it’s the beauty of the imaginative production itself that allows us to suspend disbelief and lose ourselves in the magic. On the other hand, aren’t we all excited by the prospect of Matilda on a big screen? It seems ready made for film. And Wicked will take us over the rainbow again to a fantasy world, some 80 years later

Personally, I believe that every Broadway (or West End) musical should be filmed in performance for posterity. Something so important to our culture should be archived whether it’s good, bad or indifferent.

If you’re still not certain about the competitive merits of stage and screen, here’s a little check list for you.

Five reasons to see a Musical on screen.

You can take popcorn, lollies and soft drinks in with you. If you can afford Gold Class you can even have champagne and a hamburger.

You don’t have to dress up.

You can see close-ups of faces and the dancers’ feet.

The sound is generally better and you can sing along (quietly).

Five reasons to see a Musical on stage.

You don’t have to sit NEXT to someone with popcorn and Cola singing all the songs in your ear.

You CAN dress up, especially if it’s for an opening night.

It’s an IMMERSIVE experience with a participatory element.

There is spontaneity in the performances because it’s LIVE and the sense of anticipation in the people around you makes it electric.

That’s the way the show was MEANT to be seen.

Which side did you come down on? I’m greedy - I want both. One thing is certain - Broadway musicals are no longer for the elite, or theatregoers of any kind. Every person has access to a screen, be it big or small. Which means there is no excuse for not seeing some of the best musicals in the world. And isn’t that a good thing for all of us?