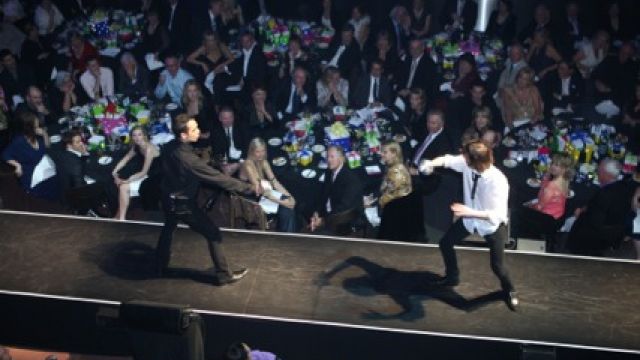 The National Institute of Dramatic Arts in Sydney has been celebrating its 50th Birthday in 2009. Widely known for its alumni superstars including Mel Gibson and Cate Blanchett, NIDA’s behind-the-scenes graduates are snapped up by the industry even more eagerly than the actors.

When NIDA Director and Chief Executive Lynne Williams spoke to Neil Litchfield, it was clear “NIDA really does know how to party,” but she went beyond the celebrations, revealing plans to move NIDA forward in a rapidly changing Australian Performing Arts environment.

An Alumni Party for 1,000 guests and the end of year Gala sit-down dinner were our two big celebratory bookends of a year of celebrations.

Design students created a time tunnel and appropriately decorated decade rooms for the party, where students past and present met.

NIDA's carpark was transformed to greet 300+ guests to the Gala.

"I was very keen that the current students should be the focus of the evening, and all of the work we presented was of the stuff they had done this year, Lynne said.

“The guests came in – red carpet into what is usually our garage – which we decorated in a way, with the fog, and we had a string quartet playing – and we had characters parading in their beautiful costumes amongst this fog – it was a Winter Wonderland – that was the theme. Then they came down through the garden and witnessed the Midsummer Night’s Dream excerpts and a multi-media display, then they came into the main area and they were treated to a program of rock stars, where the students impersonated a number of rock stars – always great fun, and they do it extremely well. Then we had an evening of entertainment. We had a huge, ten foot high, Birthday cake, designed by the design students, which is where the students came out of. We had Cate Blanchett cut a replica cake of that – it was a great evening, but again very much student focussed.”

The celebrations, for Lynne, are also about taking NIDA forward.

“Obviously the birthday year was a time to celebrate the magnificent achievements of the past but I also invited the Alumni to be part of its future.
“I ended up with a stream of graduates coming in with some terrific ideas, and out of that we’ve now put together an Ambassadors Group.” (Sonia Todd, Robyn Nevin and Moffatt Oxenbould are among the alumni Ambassadors.)

With NIDA’s behind-the-scenes graduates quickly snapped up by the industry, Lynne is keen on developing new practical industry pathways for acting graduates.

“I’m very concerned about our graduates in those first couple of years and we’re looking at how we might provide this kind of pathway into the industry. This is a really important time, especially for actors. Most of our production students, design students, production craft - are snapped up straight away. They’re very small numbers, and they’re very well networked into the industry before they leave here.
We have quite a large number of actors every year, and it’s very important that they are networked in, and that they see there are opportunities for them in the first couple of years to continue to showcase their work.
“We put together a project called Springboard. It’s a competition, and groups of actors, producers and designers can come together and compete for the opportunity to have a showcase at NIDA. Within that package they get rehearsal room time, access to our scenery, props and costume store, help with marketing and technical help, and a two-week season in the Studio.
“I’d like to be able to do more of those as we move forward, because the one that we ran this year was incredibly successful. As it turned out, they were six graduates from the Directing Course, who had put together a company called Theatre Forward. They also brought with them designers and production people as well, and as a result of that a lot of their work was seen by the industry, and they’ve just completed a season at the Stables.”

While NIDA is celebrating 50 years, Lynne is a relative newcomer, only taking up the reins in May 2008. I asked about the perspective she has formed in that time.

“Last year we auditioned 1,685, and we took 60 students. So people come here with a knowledge that they’re incredibly luck. There’s a real sense, with this privilege of coming here comes the responsibility – it isn’t just good enough to go out and say I’m just going to be an also-ran, I’m actually going to make a difference.
“I think everybody recognises that NIDA has an amazing reputation - a lot of internationally renowned graduates (Cate Blanchett and Mel Gibson), and I think it’s great to have those as ambassadors – but NIDA, has been feeding the domestic global market, with graduates for many, years, in design, production, scenery, properties, costume, stage management and lighting. Baz Luhrmann, for example, was here as an actor, and now he’s an internationally acclaimed film director.
“We have an incredibly successful design course here. In fact, two of our graduates are going to design the launch of the Sydney Festival. They’re only just going to graduate this year, and they’ve already won that job. I think that’s a testament to the kind of design opportunities that are now available.
“There are opportunities for our directing students now. We’ve just had a project with Triple J, to look at unsigned bands, and whether they would like to have a music video made – directed and created by our directing students. There was a competition and about a hundred bands applied. We got it down to six, and those six have now had a music video made for them, and they’re going to be featured on Rage.
Our directors are absolutely over the moon to have an opportunity to work in something which is related, in performance terms, but isn’t exactly theatre.”

“Not everyone can have three years of immersive training, but everyone can have a nibble at NIDA, if you like, in short bursts, and that’s very successful for us.
“Twelve thousand people a year come here through the Open Program, that ranges from 3 year olds in the Jedi School right through to an accredited VTAB Course in Musical Theatre for adults. Then there are holiday courses, short courses, part-time courses, and courses in acting for screen, producing.
“Then there’s the Corporate Program, where people can learn to present, learn about communication skills, about creative problem solving, those sort of things, and we’re having a great deal of success with that, despite the economic climate.
We’re also looking at where we might take that. Our head of corporate performance has been working in Papua New Guinea. It’s not only about revenue raising – it’s about access and opening our processes to the wider community, and to the wider world, really.”

And beyond Sydney, given the National implications of the title NIDA?

“Absolutely, yes. There’s a NIDA on Tour, and that goes to all states. The corporate performance program travels around all over the country, and we’re very open to that. We’d like to do more, in fact. We do recognise that we’re the National Institute of Dramatic Art and we want to make sure that is writ large – that it’s not just Sydney-centric.”

Under Lynne's stewardship, NIDA is set to broaden its range of Post-Graduate courses.

“I’m very keen to explore more post-graduate courses.We’re looking at running a postgraduate playwriting course for the first time in 2010. So we may be looking for six writers to come in and work with six directors, and obviously to workshop a lot of their works here with the actors and the production students.
“I’m also interested in producing. Not so much the technical production, because we have that covered with our undergraduate course, but I think there is a gap in terms of producing, and also cultural leadership generally.
“Often people like me find our way into cultural leadership. I started off as a classical singer and a teacher. But it would be good to have a course where you actually learned the skills of being a producer, or an artistic director, of a company. Where do those leadership skills come from? What are the kind of skills which you need to acquire to hit the ground running? Because, as I said before, it’s a very fast moving industry that we’re in – constantly evolving – the whole area of digital arts we need to start exploring, and exposing our students to those possibilities as well.”

NIDA introduced a new artist-in-residence program in 2009, with multi-media specialist Peter King. 2010 will see the National institute “getting physical”.

“Next year we’re going down the physical theatre route, and we have Patrick Nolan with Legs on the Wall as our artist-in-residence. We’re planning that they will infiltrate the whole of the NIDA program, all years and all courses. There will probably be some performances at the end of it, but actually the process of learning about physical theatre and what that mean s for everyone’s practise is very important. So, for example, even costume people learning, if they’re going to be working with people who are in harness, for example in a circus scenario, or if they’re working with people who are in a wall, what does that mean in terms of costume, and how are they going to adjust, will be very key to getting that whole thing moving throughout the school.”

While NIDA is going from strength to strength, how closely are they viewing the cuts to some practical courses at the Victorian College of the Arts?

“We’re very aware of what is happening at the VCA, and watching very closely, because these are our partners. We don’t see them as competitors. There’s enough here for everyone in the Performing Arts, and we want to make sure that Australia is served well in its training. So it’s not a matter of us benefiting when VCA are not. We’re all in this together and we have to make sure that we’re strong – and what happens in Victoria - we’re just ‘watching this space’ really. We’ve obviously got a big job to do here in NSW and nationally, and we have a very specific role to play, in that we are conservatory based. We are offering practise based training and practise based research here, and that will continue to be our focus.”