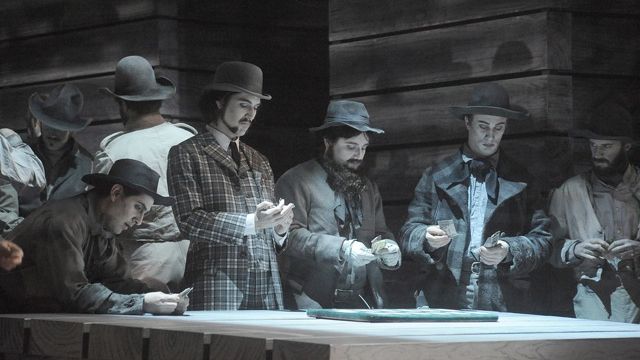 Opera Queensland will celebrate its 30th anniversary in 2011 with two Puccini dramas, The Girl of the Golden West and Tosca, forming the top and tail of its core season and Mozart comedy Così fan tutte delivering the light relief in between.
Nigel Jamieson’s visually spectacular production of The Girl of the Golden West will launch the season in May. To create the backdrop of California’s Wild West in this clever interpretation, the creative team have used projected imagery and historical film footage from the 1950s to give the production a cinematic feel. In her Australian (and role) debut, Italian soprano Amarilli Nizza performs the role of Minnie. UK-based, Australian tenor Julian Gavin performs the role of Dick Johnson, alongside Australian baritones: Douglas McNicol as Jack Rance, José Carbó as Sonora and Andrew Collis as Ashby.
July’s production of Mozart’s Così fan tutte will be in the hands of David Berthold (La Boite Theatre Company’s Artistic Director). Utilising Christopher Smith’s designs from the 2000 production, Berthold will direct this work afresh for the 2011 season. German-based, Brisbane soprano Leanne Kenneally returns home to sing the role of Fiordiligi alongside mezzo-soprano Zoe Taylor as Dorabella, with baritone Shaun Brown and tenor Virgilio Marino as their fiancés Guglielmo and Ferrando respectively.
July will also see the extension of the company’s Waltzing Our Matilda production with one Brisbane performance, after which time the show will tour South East and Central Queensland throughout August. The original 2009 cast will reprise their roles for the 2011 season with Jason Barry-Smith as Banjo Paterson, Emily Burke as the Dame Nellie Melba, Zoe Taylor as Gladys Moncrieff, Guy Booth as Peter Dawson and David Kidd as Donald Smith. Some of the performances will also feature Donald Smith’s real-life son Robin Smith appearing as a special guest artist.
In October, Cheryl Barker will perform the title role in John Copley’s critically acclaimed production of Tosca, with Julian Gavin as Cavaradossi, Douglas McNicol as Baron Scarpia, John Bolton Wood as Sacristan, Virgilio Marino as Spoletta and Andrew Collis as Angelotti.
The mainstage season will be complemented by two additional concerts: an intimate concert by internationally acclaimed counter-tenor Andreas Scholl at the Concert Hall on 23 March and the fabulous duo David Hobson and Teddy Tahu Rhodes in Concert at the Concert Hall on 23 November.
In 2011, the company will maintain its commitment to reaching audiences of all ages through a variety of programs and workshops which come under its Opera Works banner. Secondary schools will continue to receive the Moving Opera! program which will be presented to schools in the Brisbane metropolitan area and regional Queensland centres. Students from Prep to Year 8 will be entertained by the chamber opera Space Encounters. The Young and Developing Artist Programs will continue to foster the talents of emerging young artists from around the country with seven artists joining next year’s program.

Image: The Girl of the Golden West. Photo by Photografeo Pty Ltd, courtesy of State Opera of South Australia