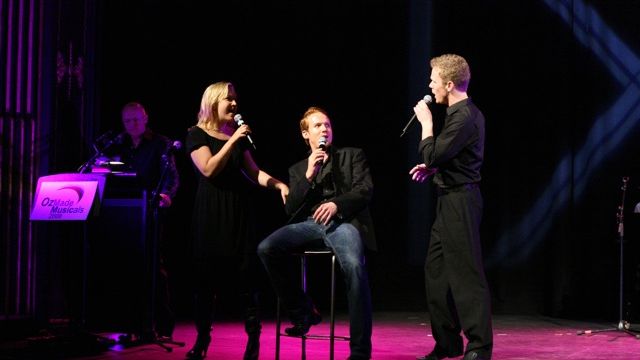 Magnormos showcases nine new and recently produced Australian musicals in OzMade Musicals on November 15th at the Comedy Theatre, Melbourne. The annual one-night only event will be hosted by Rhonda Burchmore, who replaces the previously announced Toni Lamond, currently recovering from minor surgery

A cast including Laura Fitzpatrick, Chris Parker, Lisa-Marie Parker and Jessica Enes will showcase scenes from four new Australian musical theatre works-in-progress as part of the On The Drawing Board program. They are:

Anthony Constanzo’s The Effect of Alchemy – the story of a young Sydney boy who has a dream revealing his fortune and fame in New York, and is propelled on a world-wide adventure to realise this dream.

La Creole by Plummer, Gentile and Sawyer. 1755: Ayisha, a slave from Martinique, escapes to Paris and Versailles seeking revenge on her cruel master and freedom for her fellow slaves.

Flinders Street: A Swing Dance Musical – uses an iconic and quintessentially Melbournian symbol to portray a story of romance and drama at the end of the Pacific war in 1945. The musical style of the piece captures the mood and style of the period to depict the Australia of those days while presenting some high-voltage entertainment.

Lottie: The Musicalby new writers Aleathea Monsour and Katy Forde, draws on the love story of Australian cinema legends Raymond Longford and Lottie Lyell (creators of "The Sentimental Bloke" and other classics), as they ride the wave of the golden age of Australian cinema.