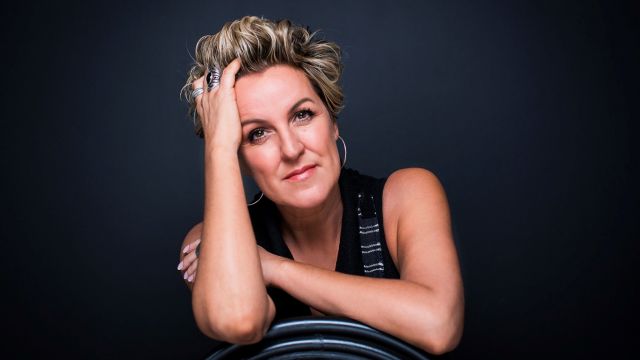 Amidst little outbursts from Billie, almost 3, who is playing fairy dress-ups from a costume box and is calling “look at me Mummy”, I catch up with the effusive, passionate, and legendary Queenie Van de Zandt, who is busy telling Billie how precious and special she is. Aware that playing Mum is far more important to Queenie than any interview, I jump right in and ask about her love of Joni Mitchell. Never one to be predictable, Queenie floors me with her response.

“I hated her,” she tells me. “I didn’t like her voice or the songs when I was in my teens. But when I started work at the National Film and Sound Archives (and I loved that job) I had a friend, Neville, who used to play her at work, at dinner parties, on road trips, anywhere and everywhere, trying to convert me. It used to drive me nuts. I went through three years of it.”

So, what changed her mind?

“One song,” she says with a degree of reverence, “A Case Of You. It went straight through me, a profound effect, the honesty, the yearning…so then I had to go back and really listen to all those songs I had ignored.” I can empathise, since it’s my favourite Joni Mitchell song; Queenie goes one further and tells me it’s her favourite song of all time. It stands to reason then that BLUE is her way of honouring Joni, to keeping the songs alive. Again, Queenie disarms me with her honesty.

“Not exactly,” she concedes. “Although it has become that way, that wasn’t my first consideration. It was getting harder and harder for me to sell new shows, to interest people in the ideas. I’m just not famous enough to put bums on seats. And, as I got older, it was also difficult not to get bitter and cynical about things. I got critical acclaim, but I had no track record of filling theatres just on my name. It was so important to me to keep believing, to keep my heart open.”

She is, as always, disarmingly frank. It’s one of those qualities that spills over into every performance and allows her such a deep connection with her audience. She offers more explanation;

“So, I was pregnant with Billie, and listening to Joni, and I decided to do something commercial. Any prospective audience might not know my name, but they certainly knew Joni’s. It was a practical decision, but it’s become a labour of love. The audience comes because they love Joni, not Queenie, and I’m okay with that because hopefully they also like what I do.” Working with her collaborator Max Lambert, Queenie started to research the Joni that lay beyond the image. When she discovered the story of how Mitchell had given up her baby daughter, she had just given birth to her own daughter - a child she had waited and hoped for and jumped through IVF hoops to have.

“That sealed the connection,” she says. “And I don’t know that I would ever have connected in the same way without having a child of my own. The pain of giving up a child must be unbearable.”

I’m wondering if that means we won’t see her alter ego Jan Van de Stool, singing teacher extraordinaire, as often on stage. Jan has been a comedy festival favourite for years and just keeps getting funnier.

“Oh, Jan will still be around, but she can be pushy,” Queenie says. “I will never give up comedy, it’s been good to me, but right now it’s about the voice.”

And what a voice it is. It soars, it whispers, but most importantly it is in love with, and understands, lyrics.

Queenie says she’s not famous enough to put bums on seats. Well, she should be.