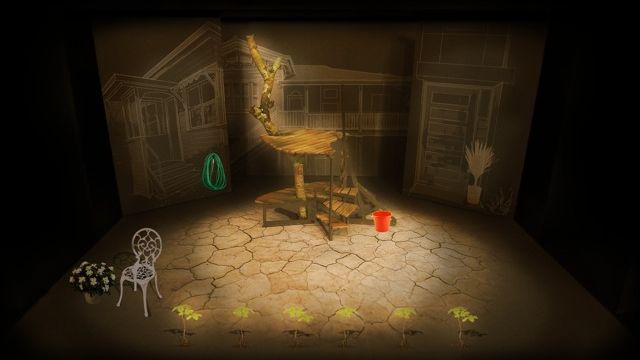 Brisbane’s La Boite Theatre was outside the flood zone when the Brisbane River burst its banks in January, but suddenly plans to stage a play about the impact of the drought in rural communities as part of their Indie season were washed away. The scope of the play, Water Wars, now embraces broader issues of environmental sustainability. It practices what it preaches. They are calling it a “99% Green production” – encompassing every aspect of what is seen on stage.

Playwright Elaine Acworth explained the origins and development of the play to Neil Litchfield.

“The piece started from an incident in the last year of the drought. Everyone was bucketing; you weren’t allowed to hose any more, but my elderly mother, who has arthritis, wasn’t able to do that. She got a special permit that allowed her to hose twice a week for 20 minutes.”

“One day a council water enforcement officer arrived and informed her that a neighbour had timed her at watering for 23 minutes.

“That started me thinking about who had dobbed my elderly mother in, and why would anyone do that rather than just say, ‘I know you’ve only got 20 minutes. Why don’t I give you a hand and bucket some water over at the same time.’

“I started thinking about communities and neighbourhoods, and how they sustain themselves under the pressure of that long slow burn that is drought.

“Coming into summer last year it rained and rained and rained, and then the floods happened. Suddenly we’re looking at a piece which is set in the future in a time of drought, but it’s about to be seen by an audience that has just experienced floods.

“The question became how is it that in the emergency of the floods, we are so fantastic and supportive, and the mud army comes out, and people are donating money, clothing and houses, extraordinary things, but just three years before it’s a completely different instinctive response.

“The play looks at those two competing, but genetically hard-wired, instincts that we have as human beings; the instinct to support each other and then there’s the selfish instinct that says there’s just one crust of bread left, it’s going to my kid and not your kid.”

“We started thinking, if we are serious about a message of sustainability then we need to be practicing what we preach. We need to see if there is a way to produce this piece of theatre sustainably; low energy, low power consumption lights, be they LED or other kinds. We started thinking, is there any way we can re-use material, have low power consumption and use non toxic paints or materials.”

“Our executive producer sourced an extraordinary recycled cardboard product called X-Board, which can be printed with anything, so you can print your design on it. While X-Board is a recycled cardboard product, it’s actually really strong. It’s used in commercial and industrial applications such as exhibition stands. They make furniture out of it.” 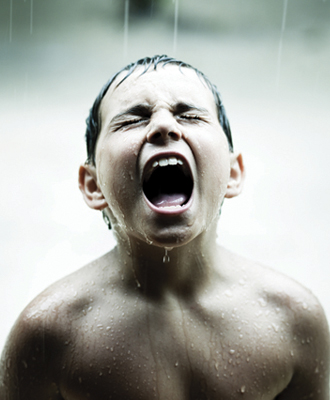 Lighting Designer David Walters has the daunting task of creating a sustainable design for Water Wars.How will he go about this with lighting, usually the real power-guzzling element of theatre?

“Production lighting is extravagant in terms of electrical power. It is one of the big costs associated with putting on a piece.”

And more than just the power cost. It’s also a big part of the carbon footprint.

“Yes, it uses an awful lot of power to produce relatively little light. Firstly, the actual methods we use for producing light, and, secondly, as a by-product it produces an enormous amount of heating. So, you’ve got the double whammy of powering up to produce light, then you’ve got to spend on air conditioning to cool the place down.”

How have you gone about creating sustainable lighting?

“Most conventional theatrical luminaires are incandescent, and, in best case scenario, only about 4% of the electrical power that goes in comes out as light. All the rest comes out as heat. They’re terribly inefficient light sources, so we looked around for alternative light sources. One that is proving extremely useful, for small venues, is LED technology, which is going ahead in leaps and bounds. These are a more efficient light source than incandescent. We are getting up to 10% of the energy in, out as light, with nowhere near the heat production. Also, with incandescent lights you can lose up to 98.5 percent of the very little light they produce when you colour them, so they’re terribly inefficient in producing coloured light. LEDs actually produce coloured light themselves, so that 100% of your light production goes into the actual colour.

“I should qualify that. If you’re using moving lights or something like that, then you’ve got some ancillary equipment and electronics on board some of the newer LED light fittings that do consume power.”

“The other advantage with the LEDs is that they have a much longer life than conventional incandescent fittings; 500 to a couple of thousand hours for incandescents, and up to 50,000 hours for LEDs.

“There’s a lot of experimenting going on in the market now. Probably the LED fixture that’s being accepted most easily by the theatrical market, for a whole lot of reasons, is the Selecon PL1. They can replace conventional standard light fittings and do all the same work, along with giving you all the benefits of much less power consumption, much less heat and continuous colour change throughout the entire spectrum.”

Hasn’t one of the problems associated with LED been the ability to project light over any distance?

“It’s very hard to beat incandescents for optics, because they effectively work as a point source, and therefore all your optical theory, based on reflectivity and refraction, that is to say, mirrors and lenses, come into play, so you can gather and throw light very effectively.

“I’m also looking at using fluorescent lights in an interesting way. They are again a very efficient light source, but not easily used in a theatre.

“The other area in this production is perhaps attitude. It’s never been a concern of lighting designers, or directors, or in fact the theatergoing public, as to just to how much power goes into producing the lights you see on stage. We use it with gay abandon.

“So to turn it around, and look at it as a design parameter, being careful as to how much power you use, is quite a new concept. We’re looking at how we can make each scene work with as little light as possible. That’s a design concept, so in those terms we will quite possibly have actors moving lights and working with the physical lights themselves.

“A large lighting state on a medium to large stage might use 100,000 watts, which is a lot of electricity. I’m trying to use no more than 2,400 watts at any given time.

“One of the areas of sustainable theatre I can’t approach is just how the power is produced. If you’re using clean power, not that you shouldn’t try to constrain the use of electricity, it doesn’t have such a large carbon footprint.

“There’s a theatre in Great Britain that was looking at the same thing. They use methane generated from the food scraps in the restaurant to generate their own power.

“And you have to look at the entire process, including the lights your using. How recyclable is the componentry? That’s one of the impressive things about the Selecon fitting. They try to make their fittings so you can return them at the end of their use and they’ll recycle them.

“I’m also looking at the use of batteries, which you can build into sets, or even into costumes in some cases. And we’ve now got remotely controlled dimmers so you can have the lights built in quite close to where you’re using them.

“You’ve just got to be careful about people promoting things as green, which aren’t as green as they’re claiming to be. And you need to look at it pretty holistically.” 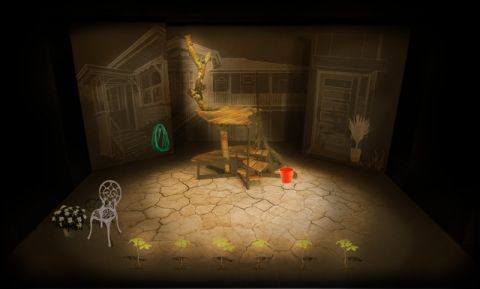 Finally, I asked Designer Penny Challen about the challenges and joys of a  sustainable model?

“As a set designer, a lot of the materials that you use aren’t environmentally friendly, and more so, what do you do at the end, because so much just gets thrown out.

“We’ve tried to come at that from two sides; firstly work with products that are inherently environmentally friendly and then, also, what do we do with it once we’re finished with it? Can it be recycled? Can it be re-used?

“X-Board (our) recycled paper product can be printed on. Because of the way it’s made there’s no timber involved. We can put it straight into the recycle bin when we’re finished. The other thing that we’ll be doing is using reclaimed timber for the areas of the set that do need to be timber. We’re looking at having a digitally printed floor, and we’re looking at recycling that into other uses after the show.

You’ve talked about the materials, but does sustainability come in on the manufacture side as well?

“In terms of the manufacture, a good percentage will be outsourced to a printing company, so they have their own guidelines. They produce a lot of screen product, so they’re very keen on how they make their product as sustainable as possible.

Does sustainability carry across to costumes?

“It will. As much out of necessity as anything else. What that will mean is that a lot of it will be second hand clothing. The costumes are fairly naturalistic for this play. It’s a fairly contained show in terms of costuming.”

Are you enjoying the process?

“It is a challenge but it’s been a really worthwhile and enjoyable process. I guess the biggest challenge is holding onto the creative vision, supporting the text properly, but off-setting it with - its all well and good to have crazy ideas, but are they actually green? It’s been challenging, but it’s also been really worthwhile. It’s the first time that anyone has actually asked me to do that, and it’s been really good for my process to attempt to be more sustainable.”

Water Wars plays at La Boite's Roundhouse Theatre from August 3 – 20, a part of their Indie season, following an out-of-town season at Oakey on July 20 and 21.

The play was developed thanks to two creative development grants through Brisbane City Council and Arts Queensland, and a Regional Arts funded development in Toowoomba (The Empire Theatre is a presenting partner).