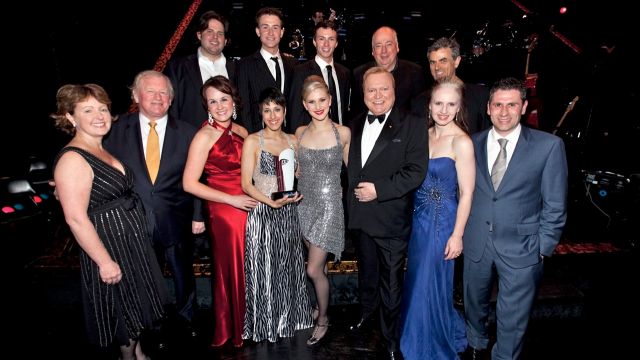 THE STARS COME OUT TO HONOUR ROB GUEST

On Monday October 4, 2010, at Her Majesty’s Theatre Melbourne, the second annual Rob Guest Endowment Concert will be held, hosted by Bert Newton. Some of Australia’s biggest music theatre stars will perform, including:

• Lucy Durack and members of the cast of WICKED

They will share the spotlight with a new generation of talented young Australian music theatre performers: six finalists from around Australia competing to become the second winner of the ANZ Trustees Foundation: ANZ Rob Guest Endowment Award.

Awarded an OBE for his services to the New Zealand Entertainment Industry Rob Guest began his career in the New Zealand pop charts. He performed in more than 40 musicals and TV productions in New Zealand, Asia and America. He won overnight fame when, after coming to Australia to audition for Cameron Mackintosh’s production of Les Misérables he took over the lead role of Jean Valjean and performed it as he toured Australia and New Zealand for the next three and a half years. In 1995 he went to London at Cameron Mackintosh’s invitation to appear in the 10th Anniversary production of Les Misérables.

In 1992 he was cast as The Phantom of the Opera in Cameron Mackintosh’s Australian production and performed the role for a record 2,289 performances over seven years. Rob Guest, had the role of The Wizard in WICKED when he died shortly after midnight on Thursday October 2, 2008. His family and friends were at his side. Rob was 57.

Image: 2009 winner Danielle Matthews (holding the trophy) and the other 2009 finalists, with Bert Newton, Kellie Dickerson and the judging panel.

MORE ABOUT THE ROB GUEST ENDOWMENT

After the sudden death of Rob Guest, OBE, in October 2008, and in recognition of his achievements in the musical theatre industry, ANZ and ANZ Trustees established a memorial fund in his honour to help emerging young performers in musical theatre. The ANZ Trustees Foundation: ANZ Rob Guest Endowment will be awarded each year to an emerging musical theatre performer selected by a panel of industry experts. The Award will provide the emerging performer with further knowledge and training in the industry to develop their potential.

Under the guidance of the Endowment’s representative committee, John Frost OAM, Tim McFarlane, Bernadette Hayes and Kellie Dickerson and supported by a number of external organizations, 2009 saw the Endowment created, the competition launched and the inaugural concert staged at Her Majesty’s Theatre, Melbourne. Hosted by Bert Newton, the concert saw some of Australia’s finest musical theatre performers take to the stage including Caroline O’Connor, Rhonda Burchmore, Marina Prior, Anthony Callea and the casts of Chicago and WICKED. It was a phenomenal way to start what is now a regular and celebrated part of the Australian musical theatre industry. The 2009 concert, paired with the bucket collections held at theatres throughout Australia and the national competition and a one of charity performance of Stephen Sondheim’s Into The Woods by the cast of WICKED in may 2010 demonstrates the wide reaching support of the endowment and has helped the it gain a strong reputation within the industry and general public, something that will continue to grow in the years to come.

industry and introduce them to the musical theatre community;

remember Rob Guest OBE and to usher in a new generation of musical theatre performers;

throughout the industry as being rising stars with a fruitful future.

A national competition has been launched to find a talented young musical theatre perform who will benefit from the prize package and being recognized as a performer to watch in the coming years. The competition runs in three stages. All performers entering the competition are required to perform and record one song of their own choice onto a DVD. These tapes are viewed by the ANZ Rob Guest Endowment Committee who select 30 semi finalists to audition live. The 30 Semi-finalists will perform two songs live in Sydney on Monday August 9 and from this, six finalists are selected to perform at the Rob Guest Endowment Concert on October 4, 2010. They will perform with a professional orchestra alongside some of Australia’s leading musical theatre artists with the winner being announced at the end of the night. Full details on how to enter, eligibility, key dates, repertoire and judging criteria can be found on the application form on the website, www.robguestendowment.com.au

The 2010 winner of the ANZ Trustees Foundation: Rob Guest Endowment Award will receive a package worth $15,000, including: Return air fares and five nights accommodation in New York, $1000 cash, 10 hours of tuition in New York and 20 hours of tuition in Australia, media training, a guest performance at the 2011 Rob Guest Endowment concert, a guest performance at Stonnington Musical Melodies, a head shot package, a financial planning session with ANZ, and meetings with agents if required.