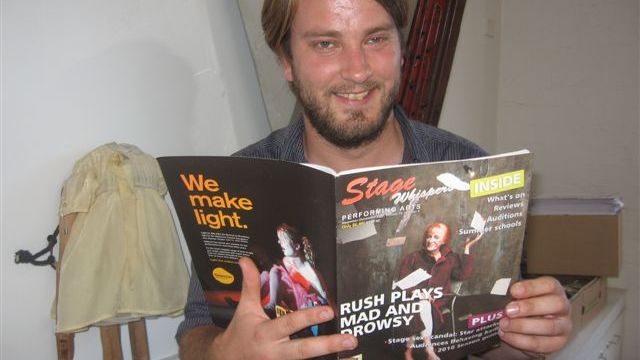 A set designer has scored one of Australia’s most prestigious jobs, taking over as Artistic Director of Sydney’s Company B Belvoir Theatre from the end of 2010. Ralph Myers will succeed Neil Armfield from 2011.

Company B Belvoir’s Managing Director Brenna Hobson said the 30 year old stood out for his "intelligence, humour, capacity for inspiring leadership and understanding of the theatrical process.”

Ralph Myers admitted to Stage Whispers Magazine that his appointment is very unusual. His only major credit as a director was a production of Frankenstein he directed last year for the Sydney Theatre Company.

It continues the recent trend of directors missing out on top artistic directing jobs. Cate Blanchett and Andrew Upton at the STC are the other notable appointment.

“The job of artistic director is a bit like being the curator of a major festival. It doesn’t necessarily mean I will be directing plays,” he said.

I asked him if succeeding Neil Armfield is a bit like coming into bat after Bradman?

“Ah but Bradman scored a duck on his last appearance,” he joked.

“Yes they are big shoes. He is one of our towering giants. Company B has been very fortunate to have Australia’s greatest director at its disposal,” he said.

Neil Armfield said he is very happy with the decision to appoint Myers.

“Ralph has a powerful architectural aesthetic, mixed with a wonderful sense of play. Most importantly Ralph has a real wisdom, remarkable in one so young. He is already a leader within the community of Australian theatre,” he said.

The freshly appointed artistic director was coy about what he will do with Company B. His first season in 2011 won’t be announced until next September.

He told Stage Whispers he is committed to “good theatre, interesting theatre and challenging work.”

For an insight into what makes him tick, I asked him to discuss some recent sets he has designed. He nominated the set for Opera Australia’s Peter Grimes.

“Basically it is like an old church hall. Everyone who came in said the same thing - this is the exactly the church hall where I had singing lessons in Walcha. In a way it was very ordinary but it had resonances of people in their childhoods," he said.

“As a set designer it is not about making something flashy, but about making the relationship between actor and audience a good as possible. Sometimes creating an empty room, that can be moving, ” he said.

“Sometimes you create a whole lot of stuff. But you have got to be selfless and have the best interest of the production in heart. After working with painters and scenic artists,  if isn’t right for the show you might have to cut it and wear all the fall out. But you’ve got to do what’s right for play and think beyond your own narrow area, ” he said.

Another set he built recently was the Sydney Theatre Company’s production of A Streetcar Named Desire, which is currently in Washington.

“My brief was to create a room that was too small for the three (main characters) to be in. As the play is a war something has got to give. I had to make it small and horrible looking,” he said.

Perhaps not so easy will be challenge of managing the egos of Sydney’s theatre community and demands of Company B’s loyal audience.