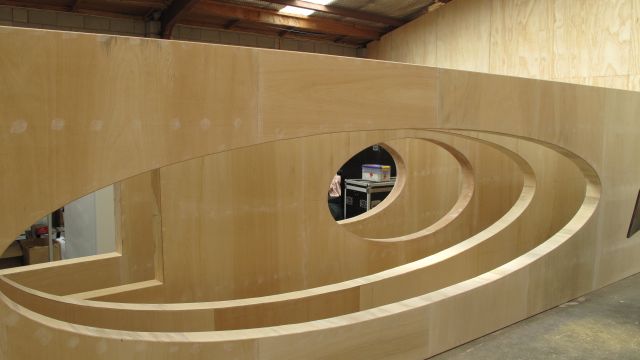 In May and June New Zealand Opera presents The Marriage of Figaro. Director Aidan Lang and Set Designer Robin Rawstorne talk to Emma Bell about the concept behind an awesome set inspired by Spanish Architecture.

Secrets, scandal and seduction! In order to keep up with this sometimes confusing farce, Director Aidan Lang wanted to iron out the complexities of the plot to ensure more clarity for the audience.
To do this, he’s built a set with fifteen scene changes.
It includes 16 meters of moving floor which bring furniture on and off, moving side walls which track from above, and four moving doors to create different rooms.
Aidan Lang said because there are various plot strands being played out simultaneously, the clearest way, visually, to do it is to have characters coming on from different locations, similar to how a film cuts to a new scene.
“To bring a level of clarity to the audience (the set and scene changes) enabled us, with a very complex plot, like a film would, to focus on each little scene accordingly,” Lang says.
The look is modern, with large circle like windows and walls, which resemble giant swirls.
They slide across the stage to change scene.
Lang described his idea for the design to Robin Rawstorne, set designer on the production, by saying: “Imagine the complex plot of this opera dancing its way through the architecture of this household, like a frenetic kid’s bouncy ball, towards beautiful resolution through total chaos.”
To keep the modernity throughout the production, the costuming also has an innovative edge. The style of the costumes remains in period but the fabrics include denim. Jeans have been donated by the community. Lang says: “It’s that feeling of being lived in.” This refers to the fact that the jeans are second-hand. “At one glance it’s, ‘Oh that’s nice - shades of blue period costume,’ but at second glance you can see ‘Levis’ patches,” he says.
Lighting designer David Eversfield has huge challenges as he has to navigate his lighting around the practicalities of lighting large white spaces. There is a tracking grid that carries four tons of scenery around the stage throughout the production. This means Eversfield can’t light from the side corridors because the set itself is in the way.
On top of the complexity of the undertaking, Rawstorne wanted to keep a lot of the 19th century ideas of set moving but incorporate 21st century techniques. “I really insisted on it (the set changes) not being controlled by machines, instead controlled by hands … humans can move things a lot more subtly than a machine,” he says.
The set is like a sculpture. To bring this idea into reality Rawstorne called on the expertise of a boat builder. “One of the challenges was this big curved wall. I designed it in the computer but I couldn't actually map it in 3D in my computer program, so we had to take it to a boat builder. He mapped it from the model that I had made. He then mapped that into his computer and then he worked out the system of cutting all the panels. It all arrived like a big Lego set, then the guys in the workshop built it.” He goes on to tell me that the use of complex trigonometry, traditional carpentry and space-age cutting has all been utilized.
A set of this magnitude won’t be fully realized until it’s erected in the theatre, as it’s too big to put up anywhere else. There will be two weeks of rehearsals with the set in place - this is when any problems will be ironed out. At this stage it can’t be known what may need to be amended to sort out any challenges. “It’s actually quite difficult because every single element of the set moves … poor stage managers are tearing their hair out!” Rawstorne says.
We trust that members of the audience will be in for a treat.

NBR New Zealand Opera’s production of Mozart’s The Marriage of Figaro plays at the St. James Theatre, Wellington from May 15 to 22 and the Aotea Centre, Auckland from June 3 to 13.

Image of the set in construction - we will bring you a production shot at the weekend.

Emma Bell is a Sydney based theatre lover and writer.
She is also a presentation skills trainer and can be found at www.emmabell.com.au