SONG AND DANCE ON SCREEN - NINE and BRAN NUE DAE 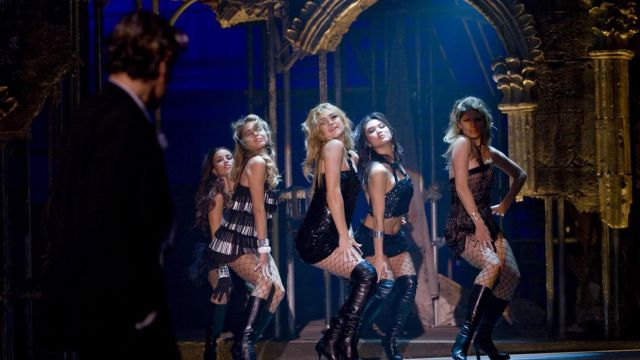 Musical theatre buffs have a surfeit of riches waiting for them at their cinema these days with the release of not one but two major stage to movie musicals.

Nine is a slickly professional cinematic experience - imaginative, inventive, and at times thrilling. Directed and choreographed by Rob Marshall, who gave us the Academy Award winning Chicago, and with an A list cast, the movie looks gorgeous, and excites on many levels. Pulling every trick out of the movie musical director’s handbook, the film frequently jump cuts from color to B&W, from past to present, telling the story of Italian art-house movie director, Guido Contini, who’s suffering from a massive creative block. Based on Maury Yeston’s and Arthur Kopit’s Tony winning Broadway play, which in turn was based on Federico Fellini’s cinematic masterpiece 8 ½, this concept musical stacks up well on screen. Best performance by far is Marion Cotillard as the wife, and her “My Husband Makes Movies” is especially poignant. Penelope Cruz almost matches her as the mistress. Who knew Cruz could dance and sing as well as she does. Her “A Call from the Vatican” is one of the movie’s showstoppers. Daniel Day-Lewis does a fine job as Contini, almost making us like the guy who seems to bed every female in sight. And then there’s Judi Dench, who as always is Judi Dench. Even though her “Folies Bergeres” performance belongs more in a German cabaret, it’s still another of the show’s highlights. Kate Hudson is saddled with a new, very ordinary song, “Cinema Italiano,” which Marshall gimmicks up with a frantic routine, but it still comes across as vacuous. Fergie nails “Be Italian,” the best number in the show, but Nicole Kidman is frankly not up to “Unusual Way.” Lots of songs have been lost in the transition from stage to film. You won’t hear “The Grand Canal,” “Be on My Own” or “The Bells of San Sebastian.” Ultimately the movie is not an emotional experience because the core faults of the work on stage are still present in the movie. You didn’t care for the weak, self-obsessed and arrogant Contini on stage, and you still don’t, despite Day-Lewis’ valiant effort, on film. On stage Nine was a musical feast, but on film, Rob Marshall, with some spectacular locations, also makes it a visual one. Musical theatre devotees will love it.

Bran Nue Dae on the other hand, has no big Hollywood blockbuster budget, but what it does have, that Nine doesn’t, is heart. Like the 1990 stage musical on which is it based, this screen adaptation of the celebration of Aboriginal culture is joyous, uplifting, and a wonderful feel-good entertainment. The wisp of a plot, set in 1969, tells the story of Willie, who runs away from some unjust treatment at a Catholic mission in Perth, and finds his way back home to Broome in a Kombie van with some hippies and his “Uncle Tadpole.” Geoffrey Rush, using an exaggerated German accent, makes the most of his stern, but likeable, Father Benedictus role, Magda Szubanski is an over-the-top comic Roadside diner proprietor, but it is Ernie Dingo who grounds the piece in reality as Uncle Tadpole. The young leads, Rocky McKenzie as Willy, Jessica Mauboy as his girl Rosie, and Dan Sultan as his rival and pub singer, give raw but endearing performances. Missy Higgins not only gets to sing but also shows some considerable acting chops as hippie, Annie, and Deborah Mailman eats up the voluptuous and sex-starved part of Roxanne. Not all of Jimmy Chi’s original score made it into the movie, but “Nothing I Would Rather Be” (Than to be an Aborigine), is given the full show-stopping tap-dance treatment in the mission, and also ends the show on the beach in Broome. Director Rachel Perkins keeps it moving, and there are some stunning visuals of the outback during the road trip. It’s our first stage to movie musical and it sets the bar high.