Spicks and Speck- tacular – The Finale 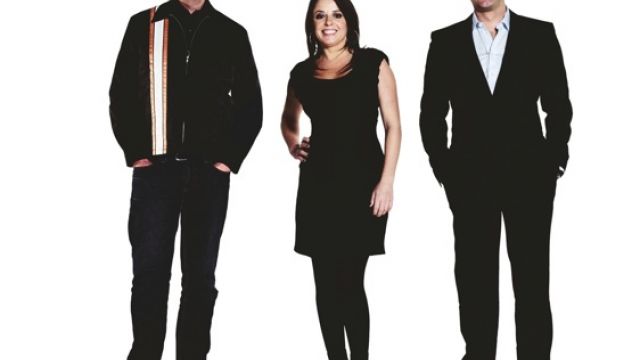 Adam Hills, Alan Brough and Myf Warhurst will hit the road from November 15 with a national live tour to celebrate seven years of Spicks and Specks.

Back in 2007 Adam, Alan and Myf promised Australia that they would tour the greatest ever stage show loosely based on a music trivia show. The Spicks and Speck-tacular was born, and played to more than 200,000 fans....

2011 is the year that will see the end of a television institution - a music quiz show that attracts an average weekly audience of 1.35 million viewers* and has been among ABC1’s top 10 programs, based on series averages, each year from 2006-2010.

Hosted by Adam Hills and starring Myf Warhurst and Alan Brough, Spicks and Specks bought the whole family back around the TV - to play and laugh along with a show that never looked down on its audience.

After seven years, 277 episodes and more than 150 guests, the cast decided they wanted the show to go out on a high and recorded a special finale episode that will go to air on 23 November 2011, bringing one of Australia’s iconic television institutions to an end.

Now in homage to Whispering Jack himself, they are heading out on the road to say good bye for the first time (and actually the last time). Spicks and Speck- tacular – The Finale is a brand new production, loosely based on a certain music trivia show, putting Adam, Alan

and Myf back on stage together with surprises, laughs, memories, live music and appalling choreography.

Kicking off in Sydney’s own Rock Temple, the Hordern Pavillion, the ‘tacular’ (as we hope it will be colloquially known) will give fans a chance to say goodbye and for the cast to get to feel a little bit more like Bon Jovi (or at least Whitesnake).

The first ‘tacular’ was a ridiculously entertaining smash hit. The Finaleis heading off to top the first tour with an homage to stadium rock that will almost certainly involve pyrotechnics and a trip to Europe (the band not the continent).

The Specktors - Kit Warhurst, Gus Agars, Steve Hesketh - are once again on board to provide the toons as the travelling show makes its way from Sydney to Newcastle, Brisbane, Gold Coast, Wollongong, Canberra, Adelaide, Perth, finishing up in the place where it all began, Melbourne.

“The last Spicks and Speck-tacularwas a hoot,” said Adam Hills. “And this time we've pulled out all the stops to say farewell to our fans with a bang. It’s a great chance to say goodbye in person while pretending we’re rock stars. Of course, we’ll actually have real rock stars with us (The Specktors), so Alan, Myf and I will be desperately trying to keep up.”Myf Warhurst looks forward to others being in the hot seat: “What I love about the live show is that it gives the audience the opportunity to answer the questions. It takes the pressure off me having to lose to Alan, AGAIN. I think that’s brilliant.”

Alan Brough said: “Very few people get to be part of something as wonderful as Spicks and Specks and even fewer people get to celebrate its conclusion with a live show that’ll make U2’s recent tour look like West Perth Primary School’s 1982 Eisteddfod entry.”

You don’t need to be told that this will sell out in a heartbeat. Tickets are on sale across the country on Monday 8 August at ticketek.com.au