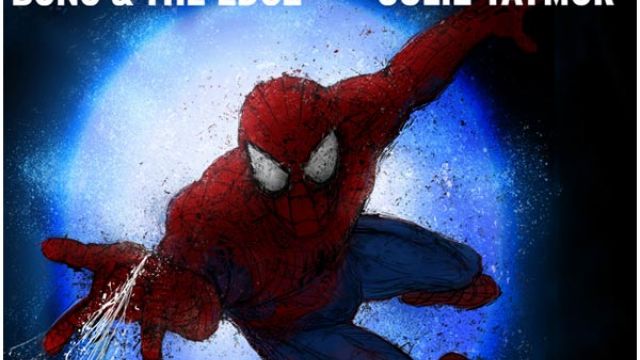 The role of the villainess Arachne in Broadway’s still-previewing Spider-Man: Turn Off the Dark has claimed a second injury victim. The New York Times reports that T.V. Carpio, who took over the role when Natalie Mendoza was injured, will be out of the show for two weeks after an injury during an onstage battle scene during the preview on March 16.

She became the fifth performer to suffer an injury during rehearsals and previews for the show.

The musical is now set to go into hiatus for three weeks from April 19 to May 11, to rehearse changes with new director Phillip William McKinley, and implement re-writes by replacement writer Roberto Aguirre-Sacasa and Glen Berger (who collaborated on the original book with replaced director Julie Taymor) without having to continue the standard a performances a week while rehearsing.

Bono and The Edge are reported to be writing at least two new songs for the show. Amongst the changes predicted for the show is the scaling back of the role Arachne.

The sixth and latest date set for opening night is June 14.

In another report from the New York Times report, Christopher Tierney, the show's most sensational injury following a mishap in one of the show's aerial stunts during a preview performance in December, has had DNA testing, not to check if he had been bitten by a radio-active spider, but in order to fine-tune his diet, to facilitate his recovery.

On March 10 director Julie Taymor became the most significant casualty in the ongoing saga of Spider-Man: Turn Off the Dark.

Earlier reports that the opening could be rescheduled for a sixth time, and delayed for as much as three months, have been confirmed, while suggestions that previews will be halted for a period to allow 'tweaking' have not been denied. The producers of the show have ended earlier speculation that Xanadu director Christopher Ashley would replace Taymor, and that while Oscar winner Aaron Sorkin turned down script doctor duties, a team of comic book writers are set to come on board.

Lead producers Michael Cohl and Jeremiah J. Harris have, in fact, put a different spin on events according to BroadwayWorld.com, announcing that there is 'a newly expanded creative team in place. The team will be implementing a new plan to make significant and exciting revisions to the production.'

Taymor's reduced involvement after March 15 is explained thus, 'the additional time commitment required by this new plan will make it impossible for director and co-book writer Julie Taymor to continue on in her day-to-day duties with the production.'

CBS News Correspondent Seth Doane reported on "The Early Show" that, when it comes to the projected March 15 opening night, even the show's representatives are referring to it as "HOPE-ening" night, and critics are calling it NO-pening night. The show will now open early in the American summer, negating any opportunity for Tony Award nominations in the current season.

In other news, while the wheels of bureaucracy grind slowly, they grind nonetheless. U.S. Department of Labor's Occupational Safety and Health Administration has slapped Spider-Man: Turn Off the Dark with three "serious" violations based on four separate incidents on the show last year. The term "serious" is used when there is "substantial probability that death or serious physical harm could result from a hazard about which the employer knew or should have known." OSHA found that actors were exposed to hazards of falling or being struck during flying routines-which seems to be in direct reference to Christopher Tierney's fall on December 20, 2010, as well as Natalie Mendoza's accident on Nov. 28 when she was struck in the head with a rope, receiving a concussion. The viloations come with $12,600 in proposed fines.

After the Musical Spider-Man: Turn Off the Dark again delayed its Broadway opening, rescheduling the official opening for March 15, it became increasingly clear that the critics were not going to wait.

Especially as the full-price previews were pulling in a staggering $1.5 million in box office takings each week.

In a major break with the traditional etiquette, the critics have now reviewed the show in preview. Virtually every major critic's review was posted on February 8, five weeks ahead of the re-scheduled opening, and almost universally the verdict was a big thumbs down.

Here are links to the major reviews.

Good vs. Evil, Hanging by a Thread

Spider-Man: Turn Off the Dark

It's a work in progress, and creator Julie Taymor has been making changes through the preview period.

No superpowers needed to sniff out this stinker

Incoherent and no fun

'Spider-Man: Turn Off the Dark' at Foxwoods Theatre

Musical Spider-Man: Turn Off the Dark has delayed its Broadway opening by a further five weeks, with opening night now scheduled for March 15.The unprecedented fifteen weeks of previews will smash the previous record for a musical of 71 preview performances by around 50, reaching somewhere in the vicinity of 110.

The creative team, led by Julie Taymor, continues to work on developing the production, notably a spectacular finale which will meet safety regulations, following earlier accidents.

The $65 million musical has hit numerous hurdles, the most recent being the December departure of Australian performer Natalie Mendoza in Deceember.

During the first preview performance, Mendoza (spider goddess Arachne) suffered a concussion when she was struck in the head with a rope. She returned for the next performance on December 1, against medical advice, but her understudy T. V. Carpio, who has now replaced her in the role, took over at subsequent performances until Mendoza's return on December 16. Citing vocal problems, Mendoza made her last appearance in the show on December 20. She was the first cast member to be injured during previews of the much-delayed, problem plagued $65 million Broadway musical, where the cast injury toll has now reached four.

Spider-Man: Turn Off the Dark had its fourth accident during the preview performance on Monday, December 20, when main stunt aerialist Christopher Tierney fell from a platform into a stage pit, severely injuring himself. The performance was halted and never resumed as ambulances and EMT’s came to the theatre to treat the actor, who was moved to Bellevue Hospital Center, where he was listed in serious condition. Tierney was subsequently discharged from hospital, and moved to a rehabilitation facility, from which he was subsequently release on January 5, 2011. He suffered four broken ribs, a hairline skull fracture, a broken scapula, a bruised lung, three cracked vertebrae and broken bones below his elbow.

This was the fourth and most severe injury on the special-effects-laden show, with a total of 38 aerial and harness stunts.

Earlier, two stuntmen/dancers had injured themselves in a “slingshot” type stunt, one breaking both his wrists, another suffering a foot injury.

Not that the jinx is new. The original producer suffered a heart attack and died at his meeting to sign contracts with Bono and The Edge from U2 to write the score.

The show resumed preview performances on Thursday 23 December, after the production team had worked with OSHA (Occupational Safety and Health Administration), Actors’ Equity and the New York State Department of Labor to discuss additional safety protocols.

A statement from Actors Equity states that the incident was the result of "human error." The statement, in full, reads, "Actors' Equity Association worked today with the Department of Labor, OSHA and the production to determine that the cause of the accident at last night's performance of Spiderman was, in fact, human error. Further protocols are now being implemented, including redundancies recommended by Equity, the DOL and OSHA, to address this situation as well as other elements of the production. Equity continues to vigilantly monitor the production for the safety of its members."

Director Julie Taymor issued the following statement: "An accident like this is obviously heartbreaking for our entire team and, of course, to me personally. I am so thankful that Chris is going to be all right and is in great spirits. Nothing is more important than the safety of our Spider-Man family, and we’ll continue to do everything in our power to protect the cast and crew."

Broadway’s most expensive production ever, the rock musical, with a score by U2’s Bono and the Edge, and a book by Julie Taymor and Glen Berger, and direction by Taymor (The Lion King), commenced previews at Broadway’s Foxwoods Theatre (formerly the Hilton Theatre) on November 28, after delaying the previously planned November 14 start).

Bono and The Edge missed the first hand action of early previews, on tour internationally with U2's 360 Degree Tour. They didn't return to New York until late December, and Bono has subsequently left town again. They are reported to be revising the score and lyrics.

Even though November’s first preview was disastrous, with the show having to be stopped several times for technical glitches, the morning after the production racked up over $1 million in box-office sales. The latest accident sparked another surge in ticket sales, and the weekly box office is surpassing $1 million.

In the four (full price) preview performances the musical played in the week to December 26, Spider-Man: Turn Off the Dark played to 100% capacity audiences. In the following week, to January 2, 2011, the show played 8 performances, again to 100% capacity.

However, Broadway's most expensive musical ever will need to sustain figures like that for several years if it hopes to break even. Some estimates place the weekly running costs alone, at the 1,928 seat Foxwoods Theatre, as in excess of a million dollars.

New York reviewers have become impatient with the extended previews, with Newsday and Bloomburg News breaking the accepted conventions to review the show in late December, six weeks prior to its official opening.