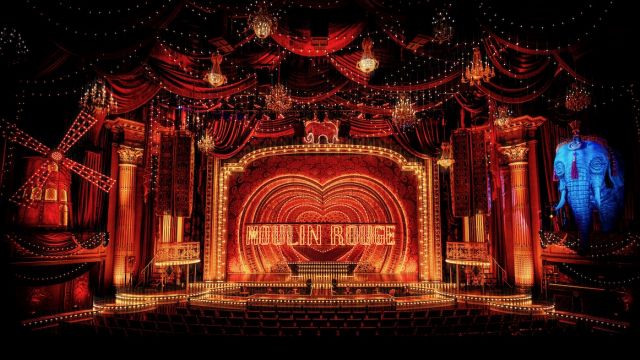 With its kaleidoscope of blended pop songs and eye-popping scenery, Moulin Rouge! The Musical has opened in Melbourne in November 2021 after being put on ice during the lockdown. David Spicer speaks to the stars Des Flanagan (Christian), Alinta Chidzey (Satine) and Simon Burke (Harold Zidler).

In 2019 Des Flanagan stood on the stage of Moulin Rouge! at the Al Hirschfield Theatre on Broadway and stared out at the empty theatre. The young performer had just watched the production, from a standing room ticket space supplied by a friend in the cast.

On the set “she whispered into my ear that it was coming to Australia. I remember standing there and thinking this could be my stage,” he said.

It was a big leap of ambition. A few years out of studying at the VCA, Des had only ever had short term theatre jobs in ensemble or swing roles.

By contrast, Alinta Chidzey was already a seasoned star of musical theatre when she went for a lead role in Moulin Rouge! Her biggest challenge in the audition room was being 37 weeks pregnant.

“It was difficult to breathe properly as my baby was sitting on my diaphragm.  I remember singing a song and they asked for a second. I asked can I breathe my baby out, as it took me a little longer to catch my breath,” she said.

Industry veteran Simon Burke found the process of lodging an initial audition as a pre-recorded submission a little uncomfortable.

“Taping a scene with a mate for a film or TV role is nice. When you tape a scene for Harold Zidler screaming ‘HELLO CHICKENS’, you wonder what the neighbours are thinking.” 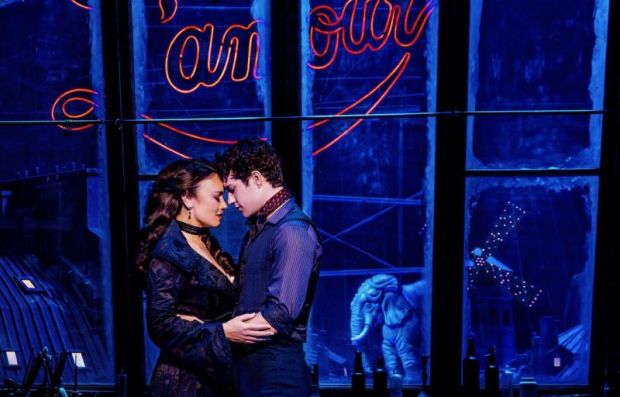 I spoke to the trio as they were about to enter rehearsals in Sydney for the premiere of the musical at Melbourne’s Regent Theatre which was scheduled for August.

Just a week later they had to pack their bags for Melbourne in one night with the future of the show in doubt. The came Melbourne's lockdown and the August opening was cancelled.

When the cast finally go to set foot on the opulent set those difficult times were blown away by the spectacle of the production they were taking part in.

Moulin Rouge! The Musical is based on Baz Luhrmann’s 2001 film, which won two Academy Awards - for costumes and production.

The 2019 production by Australian company Global Creatures finally delivered them a commercial Broadway hit which scopped up ten tony awards including best musical.

“Whenever I think of the show I just smile. It is just huge. Everything about it - the costumes, the set, the songs - are just so large,” says Des Flanagan.

“At interval I thought, ‘I would like to play this role’. From that moment I was quite driven, as the character resonated with me.”

Des screamed when news came through – two years later - that he scored the lead role.

“Christian, like myself, came from a small country town. I came from Beechworth and moved to Melbourne to study at the VCA.  He wanted to come to Paris to become a great writer.

“Another parallel is the way Christian and myself express our emotions and desires.  I grew up with this film. There is a lot I have sponged off characters like Christian throughout my life.  He has such an openness and vulnerability, which are incredible qualities for a man.”

Des Flanagan could be described as an accidental music theatre star. His passion has been singing pop songs and as a child he initially had to be roped into his school musicals by his sisters. His enthusiasm grew, but after a gap year Des was about to enrol in an Agriculture Course when his performing arts teacher encouraged him to audition for the Victorian College of the Arts.

“I threw my hat into the ring and the VCA took a gamble on me.”

Since graduating he’s had occasional short-term gigs, but his primary vocation has been in the disability sector.

“I performed to the kids at an autistic school. They were my toughest critics. Autistic children have no filter. I certainly got feedback that I worked on,” he joked.

Working with the children helped keep him grounded and he reflects now on how his life has changed.

“The community of people you are around are so empathetic and compassionate. I don’t stop wanting to perform or make people happy.” 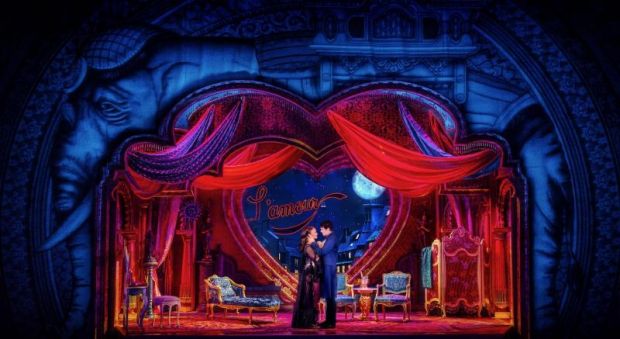 Alinta Chidzey has rarely been out of work as a dancer /singer / actor since she left the Victorian College of the Arts High School and did a short course at Centrestage Performing Arts. She was most recently seen as Velma Kelly in Chicago.

The role of Satine was famously played in the movie by Nicole Kidman.

“I love that she has a lot of humour. With people she is an extravagant sparking diamond - a star. But when layers are peeled off, she has this vulnerability.”

Alinta is relishing getting into a role which has “love (for Christian), humour, seduction and also heartache.”

At the audition Alinta said she “tried to find elements of myself in the character that I could personalise. If I understand a character in depth, I can bring to life what is important.”

Love and loss have been a feature of her last year.

“I lost a friend to cancer, but I also gained a child. The love that is there for my child, family and friends - that is what I connect to most.  It is something everyone deserves.”

Being heavily pregnant made the audition a challenge, especially at the dance call.

“I remember looking in the mirror thinking you are hilarious - what are you doing? You have to just own it. Of course, it is not ideal dancing with a big belly, but you make do and keep soldiering on.”

Simon Burke has been in the entertainment industry since he was a teenager, winning an AFI Award at the age of 13.  He will celebrate his 60th birthday on stage as the great showman and owner of the Moulin Rouge - Harold Zidler. He too agrees that an actor needs to find a connection with a character.

“It is kind of more a meta thing. I don’t have a connection with Zidler’s personal life. I think what you get from the film and the musical is that Howard is the essence of show business and theatricality.  Harold represents the art side of things - a certain sort of human being who gives up everything to do what we do.” 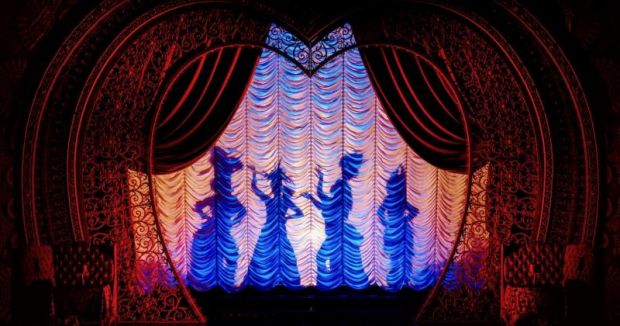 In the musical, half of his dialogue is directly addressed to the audience, which is consistent with many of his recent roles including Play School and hosting the Helpmann Awards.

When I spoke to Simon, he was on a film set preparing to go into the make-up truck. It was just a few days before rehearsals were scheduled to start for Moulin Rouge! I asked him if this made it difficult to turn up knowing his lines.

“I am a week four boy in rehearsals at my age,” he replied. “I know my lines when turning up to a film set, but I am firm believer in not knowing the lines in a stage production. I don’t even work on it. I don’t want to come in with any preconceptions. It is important not to miss out on the fun of working it out with people you are doing it with.”

Helping him learn his lines is an invention that was science fiction when he commenced his career in the mid 1970’s.

“There is a fantastic AP that’s changed my life called Line Learner. You can do it for screen tests, theatre learning, a song, film and TV. It is terribly simple. You record yourself and the other person’s lines, play it back real time and you can leave out your lines.”

Alinta has something even better than an AP to help her prepare for the stage. The mother of a young baby has a husband prepared to be the primary carer when she is at work at the theatre.

“Rehearsals are rigorous but being a mother is forever. It is exciting bringing up a daughter in a theatrical world. She will have lots of entertainment backstage,” she said. 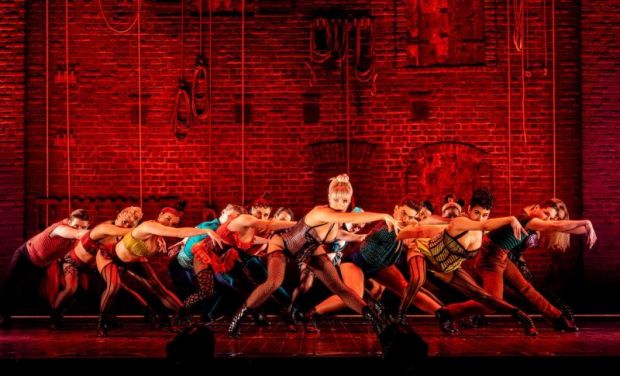 Des and Altina have a few more lines to learn than Simon and they are unusually complex. What makes the musical unique is that the songs are comprised of lines from different songs blended.

“People talk about how difficult it is to act a pop song.  For the pop songs they have chosen, lyrically and tonally it is quite easy. It is as though it is a music theatre song written to develop a plot. When I read it, without listening to the music, it came off the page so well,” said Des.

“A new song is a mash between ‘Crazy’ by Gnarls Barkley and ‘Rolling in the Deep’ by Adelle.  It is called ‘Crazy Rolling’. Christian is working through his turmoil and projecting to the audience what is to come.”

The most spectacular example of blended pop songs is in ‘The Elephant Love Medley’. Christian pleads for Satine to live for love, and she responds with anti-love songs. They cut between different songs in a duel of lyrics. Here is a sample:

[Christian, spoken]
All you need is love

[Satine, spoken]
You're being ridiculous

[Satine]
There's no way 'cause you can't pay

[Satine]
You crazy fool, I won't give in to you

[Christian]
It's so easy, all you have to do is fall in love

[Christian]
All you have to do is play the game

[Christian]
All you have to do is
Take on me

[Christian]
Take me on

[Satine]
No, no, no because you'll be gone in a day or two

[Christian]
I love you, always, forever
Near or far, closer together
Everywhere I will be with you

[Satine]
Love is a battlefield 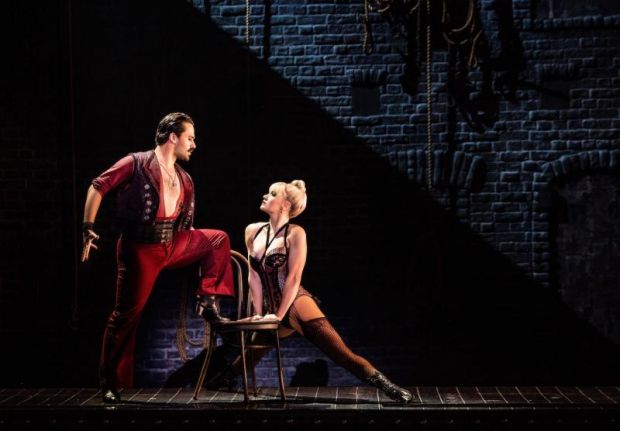 Image: Ryan Gonzalez (Santiago), Samantha Dodemaide (Nini). Photographer: Michelle Grace Hunder
Some of the songs have credits for more than a dozen writers and they are biggest names in pop music, from The Beatles to David Bowie to Dolly Parton.

Simon Burke said he’s not surprised at the popularity of Moulin Rouge! “This is the movie on steroids. There are 40 songs in the movie but 70 plus in musical, and it has been updated with Lady Gaga and Adelle,” he said.

He gets the vibe that the musical is going to be popular with members of the public who don’t get to the theatre very often.

“It is almost like going to the Easter Show, being promised two showbags by your parents, and coming back with every showbag.”

Simon was rather pleased with that pitch, as something the great Harold Zidler might come up with.

Moulin Rouge! is open at the Regent Theatre.