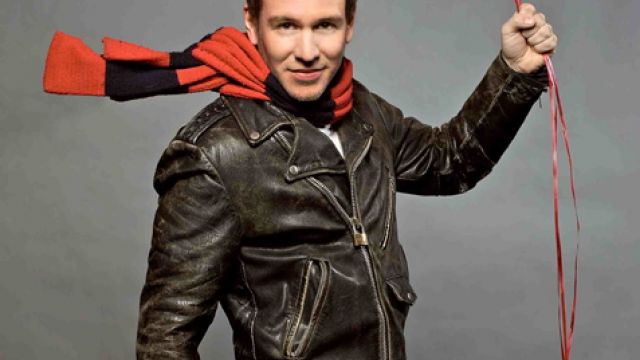 A Q & A with Geoffrey Williams.

On the eve of his first Australian tour – The 3 Balloons Tour – Tony Award nominee and YouTube sensation STEPHEN LYNCH took a moment to give Stage Whispers some insight into the world of the self-proclaimed “musician trapped in the body of a comedian” … and one whose balls hang very low.

With over 4 million YouTube hits for his song Craig (about the little-known, darker brother of Jesus Christ), it might surprise you to learn that Stephen Lynch is the son of a former nun and a priest. Equally noteworthy, is that while performers can spend their entire careers aspiring to success on Broadway (and failing), Mr Lynch’s debut in The Wedding Singer (2006), earned him a Tony Award nomination for Best Performance by a Leading Actor in a Musical as well as nominations for many other of the highest honours in American Theatre.

And a warning. Mr Lynch’s answers below are, in the spirit of a censorship-free internet, unedited.

SW: According to your media release, it would be wrong to judge you on your ‘boy next door’ looks. How would you prefer people judge you?

YouTube turned you into a star. With Australians currently embroiled in a fierce debate about internet censorship, what is your attitude toward the topic?

Good luck trying to censor the internet. Isn't gonna happen. Nor should it.

Your Broadway debut was supremely successful. What was so different for you? Did the stars just align perfectly?

It was the brilliance of my tour de force performance combined with the literary quality of the material along with the emotional resonance of the piece along with the timeless themes of love and redemption and nobility. Also, people like goofy 80s musicals.

As the son of a former nun and priest, what role did religion play in your childhood?

Not much, thank God.

What did your parents think about “Craig”?

They loved that one. It was probably their favorite. They got all the inside jokes.

This is your first Australian tour. What are your expectations about Australian audiences and how do you expect they will be different to your audiences at home?

I don't expect much of a difference, to be honest. I find that the subjects about which I sing are universal. Audiences around the world can relate to these themes. You know, AIDS and Nazi girlfriends and asshole children, things like that.

First of all, I am indifferent to "political incorrectness." I don't go out of my way to be offensive, I just don't care if I am. I also tend to shy away from politically-themed material, as it becomes dated very quickly. As for President Obama, while I don't think he's moving as quickly as I would have liked on some things, like the wars in Afghanistan and Iraq, repealing the "don't ask, don't tell" law, alternative and renewable resource research, etc, I have faith that the issues I care about most will be addressed by him eventually. Don't forget, he inherited a shitpile from the previous administration.

Justin Bieber also found a devoted global fan-base on YouTube. Are there any other similarities?

There’s so much content on YouTube. What do you put your significant success on the internet down to?

Honestly, I wasn't aware I was particularly popular on YouTube. I know people outside the US know about me because of it, but it's not like I'm selling out stadiums. I love it and I hate it. I love it because it's the greatest publicity tool in the world. I hate it because the quality of the video people upload of my sometimes half-finished songs is pretty bad.

What’s the first thing you want to do when you arrive in Melbourne?

I will find the nearest poker room.

What topics are off-limits for you as a comedian, and why?

If you had the chance to go and see any single performer in world, dead or alive, who would it be? And why?

Maybe Jeff Buckley, because of that voice. Or Gram Parsons. Two dead geniuses.

What makes you angry?

People who want to censor the internet. Or books. Or music. Or television or the radio. Or art.

You are stuck in an elevator for eleven hours with one other person. Who is it? Why? What do you talk about?

An elevator repairman. No, that was a stupid answer. It didn't get to the heart of what you're really asking me. I think I understand what you're looking for, so I'll change my answer. A drug dealer. I think I would need some help getting through 11 hours in an elevator.

And a quick ‘end the sentence’ to finish up:

I am happiest when …

I am surrounded by my favorite people.

I am saddest when …

I think about my father.