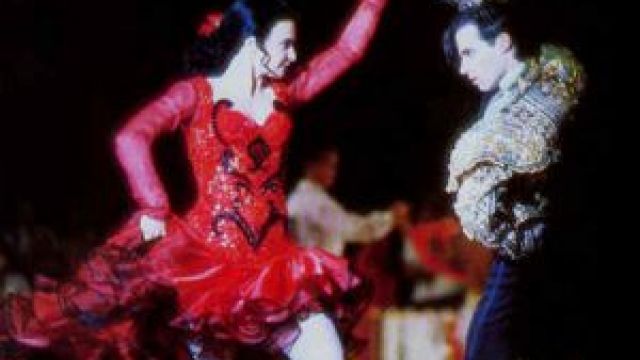 NSW Premier Barry O’Farrell today announced the stage musical of the iconic Australian film Strictly Ballroom will have its world premiere and first run in Sydney at the Lyric Theatre from September 2013.

“Today I’m very pleased to announce Baz Luhrmann and producers Carmen Pavlovic and Gerry Ryan of Global Creatures have chosen Sydney over London and New York for the World Premiere of the much anticipated, Strictly Ballroom - The Musical,” Mr O’Farrell said.

A worldwide cinema hit, Strictly Ballroom re-ignited interest in ballroom dancing both in Australia and internationally.

“Producers in London and New York have been pursuing the rights for Strictly Ballroom for many years. It is a major theatrical coup that Sydney has secured the premiere ahead of Broadway and the West End,” he said.

“It shows Sydney is not only Australia’s global city, close to major tourism markets across the Asia Pacific, but the home of the creative industries in Australia.

Originally devised in Sydney at NIDA, creator Baz Luhrmann said the decision to premiere Strictly Ballroom in Sydney was a natural one for a quintessentially Australian story with global appeal.

“Of all of my shows, Strictly Ballroom is the most personal,” Mr Luhrmann said.

“From escaping into the world of competitive ballroom dancing as a child, and my mother going on to be a dance teacher, through to the formative moment at the National Institute of Dramatic Art when a group of talented students and I brought together the classical myth of triumph over oppression and placed it in this world of suburban theatre, the first production of Strictly Ballroom was born,” he said.

“That little act of truth and defiance, born as a 40 minute student play, went on to win a competition in communist Czechoslovakia, was revised at my first theatre company and was extended, and finally was transformed into the little film that danced all around the world. A journey like this is likely to happen once in a creative person's lifetime, if they’re lucky.

“It's a simple show, with a simple truth, and a simple heart, that seems to have grown and grown and now completes the circle of its journey, returning to the city where it all began, Sydney, as an all-singing all-dancing musical production," Mr Luhrmann said. See Baz Luhrmann introducing the show.

CEO of Global Creatures and producer of Strictly Ballroom Carmen Pavlovic echoed Baz Luhrmann’s delight at the decision to open the production in Sydney.

“As a company committed to creating world class work in Australia and then taking it to the world, we could not be happier that Strictly Ballroom will open in the city where it all began. Our partnership with Baz Luhrmann is consistent with our strategy to create new experiences for audiences and we are excited that Strictly Ballroom will provide a chance for the whole city to engage with the creative development of the show’s journey back to the stage.”

Ms Pavlovic praised the work of Events NSW and the NSW Liberals & Nationals Government in securing the production for Sydney.

“We have been impressed by the pro-active and collaborative approach shown by Events NSW in making the dream of a Sydney opening for Strictly Ballroom a reality.”

“Last week we announced Sydney was chosen for the Australian Premiere of The Addams Family. I said we’d bring major events back to Sydney – here’s the proof.

“This is in addition to the recent and highly successful first run of Doctor Zhivago, as well as Legally Blonde opening in Australia in June 2012.

“These premieres will add to a diverse range of world-class productions showing in Sydney right now, including Mary Poppins and Jersey Boys.”

Lord Mayor Clover Moore MP said this is a fabulous coup for Sydney, one that will highlight and enhance the City's global status for cultural excellence, bring enjoyment to music and dance enthusiasts of all ages, while building on a groundswell of major locally-produced shows of world standard appearing in Sydney first.

"Such large scale events lift the spirits and are an economic boost for the City's hospitality, accommodation, retail, transport and fine dining industries, and we are chuffed to be a support sponsor,” Ms Moore said.

Mr O’Farrell said we are getting runs on the major events board and further enhancing the NSW Events Calendar.

“We will ensure that Sydney, the gateway to Australia and NSW, remains number one when it comes to securing and hosting major events in Australia,” Mr O’Farrell said.

(From the Media Release)