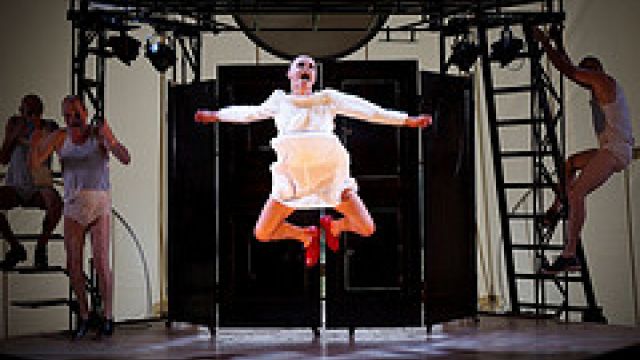 Festival Director Lindy Hume today announced details of Sydney Festival 2011, a program of theatre, dance, music and film with artists from all over the world set to run from January 8–30. The 2011 Festival, Hume’s second as Festival Director, brings narrative to the forefront with storytelling on every scale.

Festival Director Lindy Hume said, “The Sydney Festival story continues with the launch of the 2011 Festival that is (just like Sydney) contemporary, bold, global, diverse and ambitious, but also (just like Sydney) welcoming, whimsical and slightly eccentric, with big colourful bursts of existential angst and crazy, abandoned love.

“The 2011 Festival program celebrates the role of stories and storytelling in contemporary society. There are a thousand ways to tell a story, and storytellers don’t always tell the truth or let facts get in the way: as the Australian singer/songwriter Paul Kelly says: “You shouldn’t trust a songwriter. They distort, they exaggerate, they juggle things around….out of their mouths true things become lies and lies become true.” We hope that Festival artists and audiences will find some deeper human truths in the many stories told in the 2011 Sydney Festival, whose intertwining narratives are part of a larger, shared story – the story of our city in summer.” Hume said.

Sydney Festival has a diverse international theatre program where audiences will discover a grisly fairytale (The Red Shoes, Dracula), vicariously share the true life adventures of extraordinary people (John Malkovich in The Giacomo Variations, A Life in Three Acts) and experience vast, apocalyptic or wildly fabulous visions that take place on miniature stages (Invisible Atom, The Adventures of Alvin Sputnik). There are stories without words (Entity) and opportunities to create your own narrative (Power Plant).  New creations by Australian artists in all genres are at the forefront of the program, including a new Spiegeltent show created and performed by Eddie Perfect, and the return of one of the hits of the 2010 Festival, Smoke & Mirrors, for a final home town lap of glory.

Giacomo Casanova has a reputation as one of the world's great lotharios, but his adventures outside the boudoir were equally impressive - as writer, poet, gambler, military officer, violinist, Freemason, prison escapee and friend of royalty, popes and cardinals, as well as the founder of the French lottery.

It's fitting then that an actor of equally exceptional versatilities, John Malkovich, will portray the life of this master scoundrel of seduction in The Giacomo Variations. Fresh from its world premiere in Vienna, this staged concert features the work of two of Casanova's contemporaries, Wolfgang Amadeus Mozart and his librettist Lorenzo Da Ponte.

Malkovich will be joined on stage by actress Ingeborga Dapkünaité, soprano Martene Grimson, baritone Andrei Bondarenko and the Sydney Symphony, as he performs excerpts from Casanova's 1790 memoir, Histoire de ma vie, interspersed with the music from some of Mozart's most beloved operas - Don Giovanni, The Marriage of Figaro and Cosi fan tutte.

The Red Shoes is a rousing piece of physical theatre where anything is possible and nothing is probable.

How can a girl resist a pair of red shoes, especially when they make her feet dance with delight and her head spin with possibilities? But what happens when temptation becomes obsession? When she can’t stop dancing? When she can’t take them off?

Acclaimed Cornish theatre company Kneehigh, who brought us Tristan & Yseult in 2006, honour Hans Christian Andersen’s grisly intent for this classic fairytale. Get ready for a ragtag band of scoundrels and rascals who bring this adaptation full-thump onto the stage for a night of the surreal, sensuous and profound, as well as some all-out non-stop dancing.

After smash-hit seasons at Sydney Festival, Adelaide Cabaret Festival and the Edinburgh Festival Fringe in 2010, the phenomenon that is Smoke & Mirrors returns to the Festival Garden for more Spiegel-magic in 2011.

iOTA’s deliciously unorthodox ringmaster heads up a cast of curious characters, including a vaudevillian tap dancer, a twisted chanteuse, bouncing rabbits, a sublime aerialist, a bewitching magician and a blistering live band, for a show that’ll blow your socks off.

2 Dimensional Life of Her.

Immerse yourself in a richly imagined world where drawing, animation, puppetry and projection come to life in the bewitching tale that is 2 Dimensional Life of Her.

This performance-art piece takes place in an artist’s studio where magic and alchemy awaken the otherwise flat existence of drawings, paper and other two-dimensional characters. As the laws of physics are boldly defied, the artist finds herself as a sorcerer’s apprentice of sorts, struggling to control the elemental forces she has unwittingly unleashed.

A Life in Three Acts

With honesty, humour and occasional anger, performer Bette Bourne tells acclaimed playwright Mark Ravenhill about his life. Bourne's story moves from a post-war childhood to the Gay Liberation Front, life in a drag commune and on to the creation of the groundbreaking Bloolips company and beyond.

This piece paints a portrait of an amazing individual and celebrates the momentous struggles and achievements of gay liberation. A Life in Three Acts is based on edited transcripts of a series of long, private conversations.

Bigger Than Jesus is a sinfully funny and poignant multi-media ‘mass' that questions the mysteries of life and historical and modern viewpoints on Christianity. A New York Jew teaches a crash course on Christianity 101, a preacher of the ‘Church of Me' trades a crucifix for a mirror, a flight attendant on ‘Air Jesus' answers prayers via his laptop camera...even Homer Simpson makes a brief cameo as Judas.

Director Daniel Brooks and performer Rick Miller carefully balance reverence and irreverence, creating a show that has been performed in four languages. At times educational, at times enlightening, Bigger Than Jesus is a truly unorthodox theatrical experience.