Sydney Premiere of [title of show] 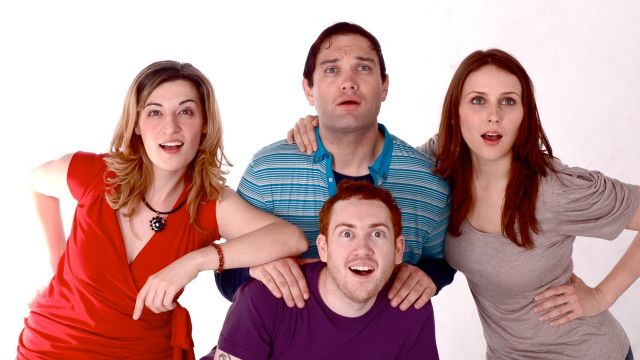 Yes, [title of show] is the title of the show. Read on.

With three weeks until the deadline for the New York Music Theatre festival, Hunter, played by Jay James-Moody and Jeff, played by Blake Erickson decide they have nothing to lose and set themselves the task of creating an original musical destined for Broadway. With their lady friends Susan, played by Keira Daley and Heidi, played by Lizzie Moore - and Larry, played by Paul Geddes on the keys - the team chronicles the creation of their own show, writing about what to write about and the events shaping their journey to the Great White Way as they unfold. When it comes time to name their musical, the festival form asks for the [title of show] which leads them to the only logical conclusion for a musical like their’s: the show is christened [title of show].

We asked producer Jay James-Moody of Squabbalogic what attracts him to [title of show], both as a producer and a performer.

“[title of show] probably speaks to me more personally than any other piece. The aspirations of the characters, their inner thoughts and their relationships are an amazingly accurate mirror of my own and I think those of the entire cast and crew of our production. As a producer I love to share with audiences in Sydney pieces that might ordinarily be overlooked on the mainstages. In this case I’m drawn to the idea of telling a story of a group of friends who have a collective dream and supporting each other to achieve it, as I think it's true to life, no matter what your dream. You always need that support behind you. The character that I am playing, Hunter, is an optimist with his sights set on a goal and he is determined to achieve it and I'm just the same. He is a very enthusiastic and sincere person who wants the best from himself and his collaborators, so it's very easy to relate!”

What are the challenges of producing Off-Broadway style musicals in Sydney?

“Affordability and venue availabilty. There are so few spaces in Sydney that aren’t closed off to curated seasons to a select group of theatre makers, can house a moderately sized or small scale off-Broadway show that is physically accessible to audiences and is well equipped and cheap enough to ensure the budget isn't blown out. This is the most pressing consideration, as most of these Sydney productions are produced by start-up independent and cooperative groups that don't have the luxury of either corporate sponsorship or a dedicated audience and, like us, pay from their own pocket for the privilege of presenting their work outside the main houses. It is certainly a struggle at times, but the reward of introducing audiences to a new piece you are passionate about is more than worthwhile.”

A postmodern homage to the grand tradition of backstage musicals like Babes in Arms, Kiss Me, Kate and A Chorus Line, [title of show] was conceived by composer Jeff Bowen and playwright Hunter Bell, who decided to write a completely original musical starring themselves and their friends. [title of show] premiered at the 2004 New York Musical Theatre Festival. Following this, [title of show] was offered a limited run off Broadway at the Vineyard Theatre and again played with great success resulting in the season being extended and the show winning three Obie Awards. In 2008, [title of show] came full circle, opening on Broadway and receiving a Tony Award nomination for Best Book of Musical.