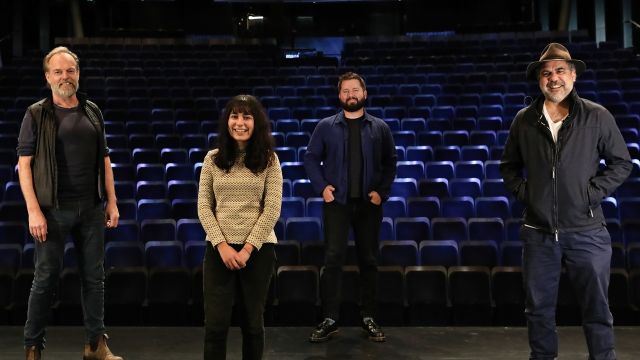 Sydney Theatre Company today (August 24, 2020) announced its current plans for the remainder of the 2020 season including a return to the stage with a COVIDSafe, socially distanced season of Angus Cerini’s Wonnangatta starring Wayne Blair and Hugo Weaving at the Roslyn Packer Theatre from 21 September, 2020.
The COVID-19 pandemic has impacted all Sydney Theatre Company shows and ticket holders, with all theatres dark since March. It is currently the intention to stage Rules for Living and The Picture of Dorian Gray later in 2020. The previously scheduled farewell season of The Wharf Revue 2020 and A View from the Bridge are cancelled and it is anticipated that they will be rescheduled into 2021. Further updates for each show will be announced in due course.
Artistic Director, Kip Williams says: "It's thrilling for us to be returning to the stage following what has been the longest period of closure in the company's history. The past 5 months have been extremely challenging for STC and our industry. I'm so excited to have our artists, crews and production departments back doing what they do best: making theatre. Wonnangatta is the perfect piece of theatre for us to return with – a phenomenal new Australian play by Angus Cerini featuring two of our greatest actors, Wayne Blair and Hugo Weaving, and directed by one of our country's most exciting young talents, our Resident Director Jessica Arthur. Audiences are in for a treat."
Executive Director, Patrick McIntyre says: “While the theatre industry has consistently maintained that the economics of socially distanced theatre do not stack up, in the case of Wonnangatta we have weighed the pluses and minuses and decided to continue. The show already has very strong pre-sales and a relatively modest weekly running budget. We think proceeding under the four square metre rule and within the parameters of our overall COVIDsafe planning will provide some useful lessons for the company – and I’m sure many people will be curious to come to the show and lean into this unprecedented cultural moment with us. But unfortunately this isn’t a solution for all the remaining shows in 2020 – and certainly we could not contemplate planning a new season under these restrictions.”

Wonnangatta, directed by STC’s Resident Director Jessica Arthur, commenced rehearsals last week under strict COVID safety measures. The season was initially programmed in the Drama Theatre, Sydney Opera House, however the current NSW Government “one person per four square metre” rule greatly reduces the number of seats that can be sold. For this reason the show will instead be performed at Roslyn Packer Theatre from 21 September – 31 October and in order to comply with current government social distancing requirements, the capacity of the auditorium has been reduced from 880 seats per night to an audience of 147. Current ticket holders who wish to attend the socially-distanced performances will be invited to book into the Roslyn Packer Theatre season on a priority basis and those who are not ready to come back to the theatre will be offered the opportunity to retain a credit voucher (valid for three years), receive a refund or donate the value of the ticket back to the company.
For those returning to the theatre, a range of stringent new health and safety measures will be implemented to keep the audience, artists and staff safe and comfortable, including: mandatory masks for audience members and staff, increased cleaning of public spaces, upgraded air conditioning, hand sanitiser stations and processes to reduce congestion in foyer areas. A comprehensive outline of STC’s COVID-19 health and safety measures is available at sydneytheatre.com.au/safety
Image: Hugo Weaving, Wonnangatta director Jessica Arthur, Sydney Theatre Company Artistic Director Kip Williams and Wayne Blair on stage at Roslyn Packer Theatre, Sydney, Australia. Credit: Prudence Upton
Wonnangatta
A haunting tale of mystery revenge
Written by Angus Cerini
Directed by Jessica Arthur
With Wayne Blair and Hugo Weaving
Wonnangatta Station, 1918. Two men arrive at a dark and empty farmhouse looking for the manager, their friend Jim Barclay. No one’s heard from him for more than a month. Something’s amiss. Then a grim discovery sets the men off on a journey across the harsh Australian terrain, looking for answers, maybe for revenge.
Angus Cerini’s multi-award-winning The Bleeding Tree was a sensation on its premier at Griffin Theatre and again when remounted by STC at The Wharf. In Wonnangatta, Cerini’s dark lyricism explores the Australian landscape - geographic and psychological - in a hard-driving yet poetic celebration of language and story.
Hugo Weaving and Wayne Blair will bring these words to life in a world premiere production directed by Resident Director Jessica Arthur.
This Australian gothic fable promises to keep you on the edge of your seat.
Wonnangatta was developed with the assistance of the Australian Writers’ Guild David Williamson Prize Development Grant.
Designer Jacob Nash Lighting Designer Nick Schlieper Composer & Sound Designer Stefan Gregory