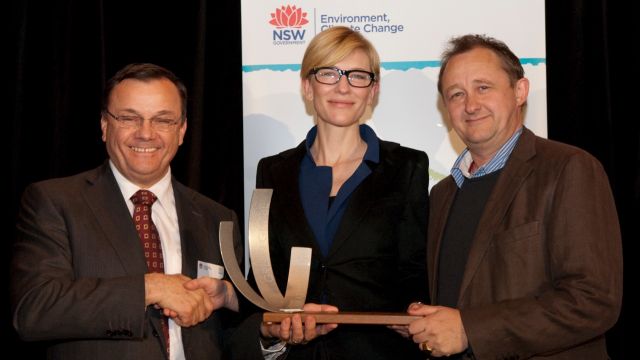 The awards received were:

• The Premier's Award for Sustainability - the top award for the best overall nominee, as selected by the judging panel.

This is a major acknowledgement of Artistic Directors Andrew Upton and Cate Blanchett’s vision to transform the Company’s heritage-listed home, The Wharf, into an international example of 21st century best environmental practice.

The judges believe that Sydney Theatre Company’s Greening the Wharf is an outstanding example of how Australians can help combat climate change, and were impressed by the work:

• to create a practical demonstration of what can be achieved with commitment, analysis and careful planning;
• to be a catalyst of a unique Green Precinct in the Hungry Mile/Barangaroo/Walsh Bay/Rocks area; and
• promoting the Greening project to the Company’s audience as well as the wider community.

Co Artistic Director Andrew Upton said: “It is very gratifying to receive these awards, recognising the hard work of many at Sydney Theatre Company. Greening The Wharf has been made possible through a unique partnership involving philanthropy, corporate support and government funding. Its success shows how much traction there is between the arts and environmental awareness and we’re thrilled to receive this acknowledgement.”

The 2010 Green Globe Award winners were announced at a gala ceremony hosted by the Hon. Frank Sartor MP Minister for Climate Change and the Environment held at NSW Parliament House on Tuesday 27 July 2010.

Image: STC Artistic Directors Cate Blanchett and Andrew Upton receiving one of the Company's two awards from Minister Sartor at the Green Globes.