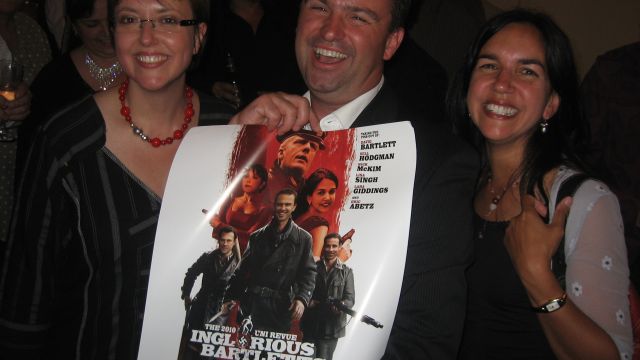 On the day I arrived in Hobart The Arts was on the front page. The Hobart Mercury ran a story about a confrontation between a member of the Tasmanian Parliament and the director of his daughter’s High School musical.
“STATE Labor politician Brenton Best has been accused of acting "like a thug" towards an amateur theatre director,” the newspaper screamed.
“Mr Best threatened and abused a Rosny College drama teacher after (his daughter) Ebony, 18, lost her prized role as female lead in Guys and Dolls.”
“Mr Best, the long-standing Labor member for Braddon, is alleged to have told (the Director) he might come and ‘sort him out’.”
“Ebony Best was told she had been replaced for the first two nights of the six shows, after missing two final dress rehearsals because of illness.”
The next day the Premier of Tasmania David Bartlett denied the episode had occurred as published by the Mercury.
“Mr Bartlett said he was satisfied his backbench colleague had only reacted as ‘any parent would’ who wanted their kids to achieve their dreams.”
Still it was big news in Tasmania. The Director even had to run the gauntlet of a clutch of TV cameras at his school.
Tasmanian electors subsequently cast Messrs Best and Bartlett in a whole new parliamentary drama, Balance of Power, within weeks, with the minority Greens in a substantial supporting role.
While the story made the front page because it took place a few weeks out from an election, in Tasmania amateur theatre actually dominates the arts scene.
You drive around town and the flags in the CBD promote the next big production, The Wizard of Oz. The amateurs can hire the biggest theatre in town (The Royal) and can afford to advertise on prime time television.
The Old Nick Theatre Company, which has a tradition of staging a University Revue every year, sold $125,000 worth of tickets to its 2010 season just a few weeks after tickets went on sale before the revue had been written.
The Premier of Tasmania is pictured here at the after show party for Keating! promoting the 2010 review of which he will be a major target for satire.

It poses a challenge for the fledgling Tasmanian Theatre Company, formed in 2008. The previous professional theatre company folded in 1996.
I caught up with the Artistic Director Charles Parkinson.
“The media has got used to a situation over the last twelve years where the theatre scene is dominated by amateur musicals. Not only are we having to forge an audience in a saturated market, we are having to forge press coverage in a saturated market,” he said. “There have been some very successful amateur musicals which allow for a (marketing) budget even the Melbourne Theatre Company and Sydney Theatre Company don’t have quite frankly.”
“There has been a void in the professional scene here. While there is a clear delineation between amateur and professional theatre (on the mainland) in Tasmania there is a lot of cross over in terms of creatives,” he said.
The Tasmanian Theatre Company’s focus in 2010 is new plays based on Tasmanian stories.
Mr Parkinson admits this makes it an even bigger challenge for his company.
“The market for new Australian plays, no matter where you are, is very small. That is the reason the major companies in Melbourne and Sydney don’t do as many as they would like,” he said.
Still the TTC is forging ahead. Its 2010 season includes six world premiere short plays – five of which are set in Tasmania.
The season commences with a new Tasmanian play by Finegan Kruckemeyer, The Company I Keep, performed by the Second Echo Ensemble, an integrated performance ensemble of young people with and without disabilities.
Don’t Think Twice follows, a double bill evening featuring a dark comedy and another work described as ‘a blistering fusion of the near and far, the local and global, the hysterical and the horrific’.
Later sex, death, and a cup of tea is four new short plays as one bill. All new Tasmanian plays commissioned by the TTC, they resulted from residencies in four different towns, or in Debra Oswald’s case, King Island.
Mr Parkinson is optimistic that the Tasmanian Theatre Company has a viable future.
“If they can sustain a professional theatre company in Cairns and Albury Wodonga, there is no reason to not do it in Hobart,” he said.
He also looks longingly at the success of the Tasmanian Symphony Orchestra.
“I would kill for their budget,” he said.
The Tasmanian Theatre Company makes do with 3.4 staff. It rents the Theatre Royal Backspace Theatre, which is also used for play readings.

To emphasize how ‘rich’ amateur theatre is compared to its ‘poor’ professional cousin, you only have to walk a few blocks away from the Theatre Royal.
Another venue is the historic Playhouse Theatre, owned by the Hobart Repertory Theatre Society.
In the Central Business District of the city an amateur theatre company owns a 200 seat, stand alone venue with balcony seating and a fly-tower.
The President, Jack Rheinberger, took me on a backstage tour and he pointed to the new lighting rig built on the back of years of volunteer labour.
The club even rents out the venue to the major Arts Festival, Ten Days On the Island, when it comes around every two years.
The Hobart Repertory Society usually stages one musical and four plays every year.

But the Cameron Mackintosh of Hobart is the intrepid producer and director Craig Wellington. With a group of investors called the Tasmanian Theatre Trust, he puts on mega-musicals.
According to the Annual General Report of the Theatre Royal, his production of Les Miserables in 2008 took more than $400,000 at the box office. This makes it the largest grossing community theatre company in Australia.
Their 2009 production of Miss Saigon is said to have been just as successful.
“People asked us how we got the roof off to allow the helicopter in,” Craig Wellington told Stage Whispers.
Craig Wellington is a little embarrassed that the Theatre Royal publishes the box office results.
He said the Trust ended up with a modest surplus from each season which is put into the next year’s season.
This type of mega community theatre productions are the biggest sellers in Hobart.
The Theatre Royal, which imports the traditional regional fare of touring plays, children’s theatre, opera and dance, sells about two million dollars worth of tickets a year.
The mega musicals tend to dwarf these highly subsidised productions and exceed anything the Tasmanian Theatre Company can attract at this stage of its development.

There is also scope in Hobart for plenty of characters.
One is Daryl Peebles.
He is a speech writer for the Tasmanian Government, a playwright, magician and is studying for his PHD in Comedy.
He also is the main creative force behind another unique community style production which is hugely popular.
Each year he writes a naughty adults only pantomime. A recent one was called Boobs in the Woods.
In Hobart the entertainment is big, brash and frisky.

Originally published in the May / June 2010 print edition of Stage Whispers.