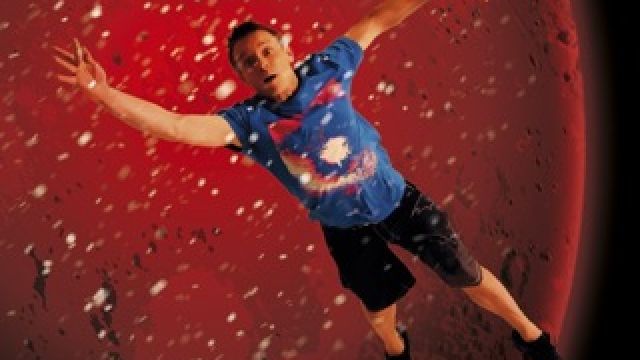 Kim Carpenter's Theatre of Image will premiere Snow On Mars, the aspirational story of a boy’s dream to be the first man to see  snow on Mars, at the York Theatre, Seymour Theatre Centre in January.

Snow on Mars reunites the multi-award winning team of Richard Tulloch [writer] and Kim Carpenter [concept and design] (The Book of Everything, The Happy Prince, Stella & The Moon Man) to work with international Australian director, Gale Edwards (Sweeney Todd, The Boy From Oz).

Kim Carpenter explained how aerial performance and digital animation will meet in Snow on Mars.

"Snow on Mars grew out of Theatre of Image’s Creative Holiday Workshops in art, drama and music on the subject of flight at The Powerhouse Museum. Space travel stimulated the young people’s imaginations more than any other form of flight. Children are informed about space travel with the knowledge that man has been to the moon. It also offers them heroes. So, as a result of the outcome I contacted Andy Thomas, Australia’s only astronaut at NASA. His childhood obsession with space, his amazing achievements, and his passion for putting man on Mars, became the bedrock for the project.

"So I co-opted my colleague, writer Richard Tulloch. We began creating an aspirational story about a 12year-old boy who wishes to be the first man on Mars. In developing the story, I addressed the way it would be told on stage. Waylon’s dreams and aspirations are now to be told through aerial performance – in most cases combined with digital animated video. Theatre of Image has used various forms of digital video, animation and film in most of its productions since 1997’sJake & Pete…a Road Story for Cats!! It has become a signature element in Theatre of Image’s work.

"However this offers us a new challenge with the intricacy and precision involved in syncing live aerial performers with the moving image, e.g. the entrance of the ghost astronaut: as he walks in space, millions of shimmering stars fall from his feet. The coordination and timing of each step with the projected image and music must be seamless.

"In practical terms, the performers are either flown from a track wearing harnesses with a line connected to the track. Their trajectory is controlled by a rigger (who acts like a puppeteer with people as his puppets) while the imagery is projected on top of them. They fly /perform choreographed sequences in front of a wall/sky which is transformed by projected imagery. There are also pick up points for flying the performers mid-stage. The aerial performers interact with earth-bound actors. 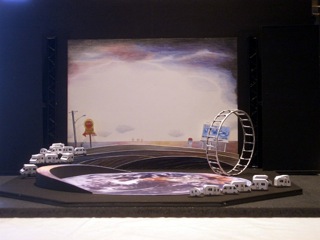 "The set model shows how the elements come together in the space and the digital work is well into development."

In Snow on Mars, 12-year-old Waylon (physical performer, Rick Everett) wants to be the first man on Mars.

From a country caravan park, he writes letters to his hero, Andy Thomas. It seems impossible that Waylon could ever become an astronaut. His Dad (Elliott Weston) and Nan (Deborah Kennedy) move around so often that he is falling behind in his schoolwork.

Waylon getting into NASA is as unlikely as finding snow on Mars.

With the help of his Nan and local girl Gabi (Danielle Jackson), Waylon throws himself into the challenge, entering a project about the difficulties of landing the first man on Mars.

They discover that, although dreams may not necessarily come true, there is much joy and excitement to be had in reaching for them.

Snow on Mars will stimulate children’s imaginations with an intriguing future - the exploration of Mars in the tradition of Cook, Magellan and Columbus. It will help our understanding of where we fit in the universe.

Kim Carpenter's Theatre of Image was founded in 1988 by the Artistic Director, Kim Carpenter and is an advocate for young people and their families.