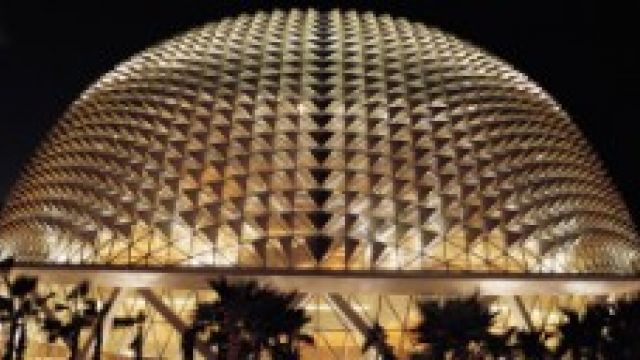 Singapore may be known as the trading lion of Asia, but it is now staking its claim as a major Arts capital. In June it is hostng a major arts conference coinciding with its International Arts Festival, bringing together leaders in the field of musical theatre, classicial music and jazz.
David Spicer reports on what is in store in June and for regular visitors during the year.

On Singapore Harbour, in the centre of town, is a striking looking building that resembles a durian. For those not familiar with a durian, it is known as the King of the fruits, with formidable spikes on the husk.
It’s called The Esplanade Theatres - Singapore’s version of the Sydney Opera House.
When I did a tour, I was surprised to learn that it became a durian by accident.
“The original design of the centre was made to look like two Chinese lanterns floating in the water,” my tour guide told me.
“It was discovered that having a complete glass exterior made the building really hot; it would have been a giant glass green house,” she said.
For a year architects studied the movement of the sun and built the metal spikes as sun shades to keep out the heat.
A durian is also known for a pungent smell on the inside. This is not the case with this piece of architecture. Inside are a stunning concert hall, a 2000 seat theatre and a drama theatre. There is also an outdoor concert area.
The Esplanade, however, has a unique trait, with a distinctive Singaporean flavour.
“To appeal to the local public, the Esplanade was connected to a shopping mall, to draw people inside for reasons other than a show,” my tour guide told me.
The other potential distraction is that it is built on top of a train station.
To cut out the vibrations, the theatres are insulated by floating rubber pads. The concert hall and theatre have also been built inside a giant box, which is not connected to the rest of the building. I was told that even during the Formulae One Grand Prix, the roar of engines can only be faintly heard inside.
So, while the hardware is impressive, what about the software? The best tip for tourists is to check what free entertainment is available. Each weekend The Esplanade has free outdoor concerts, while free classical recitals take place inside.
The Esplanade is now on the circuit for big tours of Broadway musicals, and for something local and distinctive it’s worth seeing if the Chinese Opera is on the program while you’re in town.
The locally generated product is limited.
One Singaporean tradition is the Dim Sum Dolly series. This is a popular and rather tame variety act, which sends up local social mores. Recent targets for satire have included Singapore Airlines’ hostesses and over enthusiastic table clearers at food courts.
The biggest theatre company in town is The Singapore Repertory Theatre. It’s led by Charlotte Nors, who is Danish. She makes do with very limited resources.
“When I was in Denmark we got sixty five percent of our funding from the Government. Here we get 4 percent of our funding from Government,” she said. “We also have to survive without a subscription season as Singaporeans buy in the last minute.”
About seventy percent of the company’s audience are Singaporean, while the rest are expats.
They stage comedy, drama, Shakespeare, the occasional musical and lots of children’s theatre. With a negligible Government subsidy, they have to stick to commercial drama such as Art, The Odd Couple and The Women in Black. Musicals they have staged include Rent and Avenue Q.
“We see our role as developing future audiences,” she said.
A big challenge is finding and developing local creatives.
“Most Singaporean parents don’t aspire to have their children in theatre,” she said.
It forces The Singapore Repertory Theatre Company to import designers and other production talent.
Despite the lack of resources, The Singapore Repertory Theatre has had some impressive results. It sold one hundred thousand tickets to an original Singapore musical which opened The Esplanade in 2002. Forbidden City: Portrait of an Empress – told the story of China's Legendary Empress Dowager Cixi. The musical was so popular it had two return seasons.
An excellent time to visit Singapore is during its International Arts Festival from mid May to mid June.
Coinciding with the Festival this year is Live! Singapore. It’s a conference, but also an expo for Theatre, Music, Dance, Acrobatics, Puppetry, Illusionists, Musicals, Attractions, Pyrotechnics and Folk.
Live! Singapore is a four-day inaugural event incorporating 1500 leading performing artistes and live performances. It offers a trade fair, a conference and live performances all in one venue.
There are three main areas covered by the conference.
The Music Theatre section examines the future of musicals and will compare traditional works to juke box productions.
The Jazz and World Music section looks at the glorious past and uncertain future of this art-form.
The Classical Music section focuses on bringing classical music back to the people and back to the centre of people’s lives.

Book your tickets now before 20 May 2010!
First 5 Stage Whispers readers* who purchase a 4-day conference + trade fair ticket will secure a free ticket to watch the Academy of St. Martin in the Fields with Joshua Bell.

*Please indicate in your registration form that you heard about LIVE! from Stage Whispers magazine.