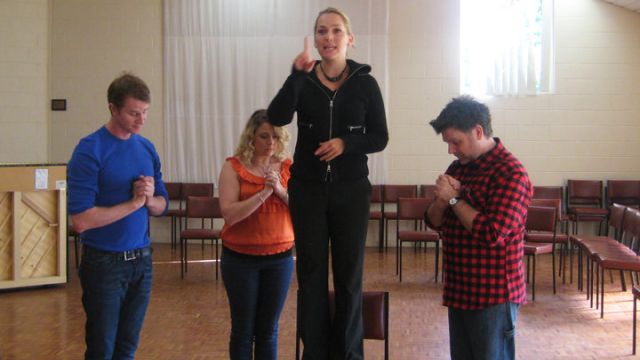 Melbourne based Magnormos is about to present the Australasian premiere of [title of show] - yes, that’s the show’s name.

[title of show] is a boutique musical that deals with the process of writing an original work, and the strength of friendships. The musical documents its own creative process, as two friends write a musical to enter into the New York Music Theatre Festival, with the help of two actress friends.

Monday 3rd May 2010
Well... I certainly lost track of my diary entries once we hit the theatre, but surely the busy schedule of a bump-in week is cause for forgiveness?

In the scheme of bump-ins, the [title of show] one was relatively painless, with the set being installed and completed on day one, and other departments following suit with speed and efficiency.

But it's the 'getting every department to cohesively link together' in the small amount of time that you have that is the real challenge... but we were completely prepared for a preview audience by Friday 30th April, though some parts of the show were still 'a work in progress'.

Previews are an excellent way of completing a rehearsal process, allowing you to put your show out in front of an unsuspecting audience and garner the necessary feedback and performance experience before you present to your gala opening night audience.

With large houses on both previews who provided venue-filling laughs and applause when we expected (and in suprising parts we never expected) it has given us all the confidence to know that we have a show. Whilst we continued to fine tune all of the elements across the weekend, we have now put the last dots on the i's, and the last dashes on the t's ... and now it's time to see how Melbourne audiences and media will respond to this quirky little show. Fingers crossed, and chookas to my entire team!

Sunday 25th Monday
Well... a full day of rehearsal, our last before we move into the theatre, and now our show is completely blocked and ready to have the technical
elements added in.

We started the day with a photoshoot for some new media shots, which I've discovered can be an excellent exercise in character development. Having the cast in costume, under lights, and thinking about the physicality and interactivity of the characters serves the dual purpose of preparing photos for press packs - as well as giving the actors an opportunity to work on their character without the constraints of the written text.

The rehearsal started with the setting of the last segment of the show, from NINE PEOPLE'S FAVOURITE THING into the final scene. Closing the scripts after the last lines of dialogue brought a palpable feeling of accomplishment to us all, as we knew that the remaining time could be spent
on refining everything we had set.

And that remaining time is a week, so not too bad in the scheme of things.

We were fortunate to still have our Musical Director Sophie Thomas in attendance at today's rehearsal, even though it WAS her birthday and many less committed folk would have refused to be in a rehearsal room for a full day!

It was also a great day for media, I did a radio interview with JOY FM 'Behind the Scenes' program live from the rehearsal, with the cast singing
in the background behind me as I stepped out to take the call, and my co-producer Sean Bryan was on 3CR live in studio. There's plenty more
happening this week including features in the Australian and The Age so it's good to know that the [title of show] word will be getting out there to the people.

I'm really looking forward to seeing the show in the theatre now, with the set and lighting/audio compliment, even though the work done in the rehearsal room could be ticketed anyway.

By the next time I update this journal... we will be in the theatre!

Monday 19th April 2010
So this rehearsal diary entry is being written from the rehearsal itself, as we have started with an intensive music call to clarify the work done on the DEVELOPMENT MEDLEY yesterday. With musical director Sophie Thomas taking charge, I have some time to jump on the laptop and give some 'in the moment' commentary. As I type, the cast are singing right in front of me, and, biased though I may be, I'd just about pay money just to listen to these guys rehearse! How fortunate to have four extremely talented performers who create such a beautiful vocal blend.

With Sophie satisfied with the DEVELOPMENT MEDLEY, we move onto the show's finale, NINE PEOPLE'S FAVOURITE THING, which is now the last song for us to look at musically. "I'd rather be nine people's favourite thing than a hundred people's ninth favourite thing" is the key lyric to this song, a beautiful message and an extraordinary way to finish the journey of the characters as they prepare to open their musical on Broadway. The climactic lyrics: "When we open tonight!" will have a surreal meta-theatrical meaning for us on our final dress rehearsal - and even more so on opening night - and I think the look on everyone's face in the rehearsal room showed that we are all thinking about this very fact!

Opening night is now only two weeks away as of today, but this time next week we will be in the theatre and dealing with all of the additional technical inputs.

Well, the music call is now finished, and we're about to start a run of everything we have done up until now (which is about 75% of the show). So ... it's time for me to stop typing this rehearsal log - and actually start to rehearse!

I'm certainly looking forward to seeing how everything we've done up until now comes together...
Aaron Joyner

Sunday 18th April
Nothing is more electrifying and exhausting than a full day rehearsal, especially as you get closer and closer to the opening night, but we charged through from 11:00am until 7:30pm. The early morning, spent with the boys only, finalised the staging for the songs ORIGINAL MUSICAL and PART OF IT ALL, but then we put the full cast through their paces with the completion of MONKEYS AND PLAYBILLS, then going straight into setting FILLING OUT THE FORM and surrounding scene. After a small break to recharge, we bit right into the challenging FESTIVAL/DEVELOPMENT MEDLEY.

This is a large section of the show, which cuts in and out of different locations, and has challenging musical harmonies that are all similar, but with different nuances or lyrics or rhythms. Add to that the choreography, which was similarly challenging, and we had enough to almost fry the brains of our very talented cast members. We managed to set the full medley, and even advance a little further with some scene work, but a focused musical call will be required on this section because we all but abandoned attention on the music for today!

Today we also had our full production team sitting in on rehearsal, and thanks to the pick up of a free internet connection at our rehearsal venue, we managed to have an extremely productive day of production as well. As the Executive Producer and the Director of [title of show], it was really great to be able to cross between the rehearsals with the Associate Director / Movement Director (Jessica Enes) and the cast, and my Co-Producer (Sean Bryan) and production team. I think we achieved more yesterday in all fronts than we could have with the two camps isolated. With our design team there at rehearsal, it was fantastic to be able to shout out an idea for the projections or a prop as we were setting, and within 30 minutes have a draft ready for approval on a computer screen.

We have a week of rehearsals left before we move into the theatre … it's a very exciting time!

[title of show] premieres at Theatreworks, St Kilda on May 3, with previews from April 30.

Image: The cast in rehearsal