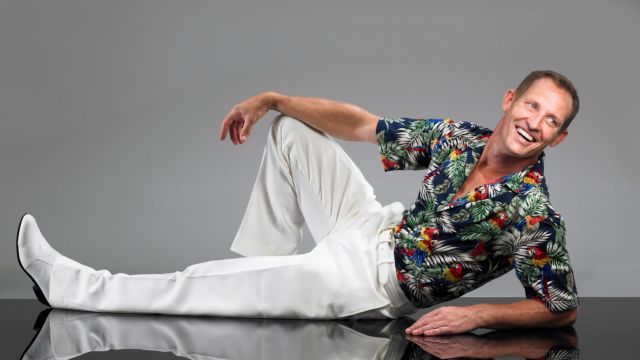 He was the original Boy From Oz. Now Todd McKenney has picked up the maracas once again. He kicked off an encore season for The Production Company in Melbourne on August 18, and he’ll return for a Summer season from January 5 to 16, 2011 (now with extra February dates and a March season at the Capitol Theatre, Sydney). David Spicer, the agent for the musical, spoke with Todd and previews community theatre productions in other parts of Australia.

Todd McKenney says the role of Peter Allen is in his blood.
“At the first run through I didn’t even need the script. It is in my DNA,” he said.
It’s no mean feat to remember such a huge a role 12 years down the track.
I first met a fresh-faced Todd McKenney at The Sebel Town House in Sydney in 1998. He was alongside Producer Ben Gannon announcing the launch of a new Australian musical, The Boy From Oz.
Todd revealed that he almost didn’t take the part.
“I had met Peter Allen a few times, had been to his concerts and had been a big fan of his music. I hesitated at first because I didn’t want to kill my memory of him. I didn’t say yes straight away,” he said.
It was only when the Director Gale Edwards told him she wanted someone to give an impression of Peter Allen rather than impersonate him that he said yes.
Todd is mighty glad he took the role.
“It changed my life. The journey opened a stack of doors, and I grew up as a performer. I had to command the stage and be the only person, as Peter Allen was in concert,” he said. “It was a massive education in theatre, which gave me the confidence to do many things including be a loud mouth on TV.”

The aim of the Producers, (the late) Ben Gannon and Robert Fox, had always been to take the musical to Broadway.
When it made it there in 2003 the star of the show was Hugh Jackman.
Todd has no regrets on missing out on the role.
“I had my turn,” he said.
But when Hugh Jackman toured The Boy From Oz to Australia in 2006 he didn’t see it.
“When he came to town I was always in another city. However I’d left The Boy from Oz in such a great space in my psyche I wouldn’t have gone to see it,” he said.
“I sent Hugh champagne though. Look, I did 766 shows. I had a pretty good go at it, ” he said.

Now aged 45, Todd is closer to the age that Peter Allen was as he is depicted in the musical.
“It will be really interesting to see how it has changed and grown. My comic timing is now more mature. I am now not afraid of pausing,” he said.
Todd says another reason why he was keen to have another go is because Nancye Hayes is directing the production.
“We have a great relationship. I did Six Dance Lessons in Six Weeks on tour with Nancye for a year and we became really close. I feel in very safe hands with her. We know each other’s language,” he said.
The Production Company is known for staging more concert-like versions of musicals with the orchestra on stage.
“We’re not selling it short, but presenting it in a different way. There still will be the flashes of Peter Allen brilliance. The orchestra will be part of the act,” he said.
The Production Company season of The Boy From Oz was confirmed only late last year due to a chance meeting between the agent for the show (that is me) and the company’s General Manager Mr. Ken Mackenzie-Forbes.

Community Theatres elsewhere were already in full preparation mode.
In Sydney’s west, The Blacktown City Community Theatre had an ace up its sleeve. Into their audition room walked Mathew Waters. He played young Peter in the original production. Mathew Waters is now 21.
Todd remembers him well.
“He was great; he was a funny little ratbag. He had so much energy and gumption,” he said.
Other actors playing Peter Allen in August are leaving no stone unturned.
For The Gosford Musical Society, Will Coleman has got in touch with Peter Allen’s surviving sister and is visiting Tenterfield to retrace the singer’s roots. (Yes I know this is a gag from the show.)
GMS has sold out 17 performances, and every time they put another performance on the market it sells out in an hour or so.
I attended the opening night – it was a very special night. It started with Peter Allen arriving on stage in a rocket ship and kept rising. Will Coleman has the closest resemblance to Peter Allen of any performer I have seen.
In Newcastle, The Metropolitan Players has hired the 1200 seat Civic Theatre for their season.
Grant Drury-Green is playing Peter.
He’s described by Director Julie Black as a magical performer who “sings, dances, acts and plays the piano” and once learnt the lead role in 42nd Street with two day’s notice.
I attended last Saturday night, and it was another spectacular production. The Civic Theatre is gorgeous venue. Aside from the crisp choreography and stylish performance of Grant, a highlight was the fabulous costumes.
The Canberra Philharmonic Society kicks off on Friday August 13. It has Jarrad West, a graduate of both W.A.A.P.A and the V.C.A. On top of his long list of performance credits, Jarrad is an award-winning director.
And the Spotlight Theatre on the Gold Coast has Matthew Hadgraft currently performing the role. The talented pianist and cabaret performer cut his teeth playing Benny in Bjorn Again for seven years. See Roger Mckenzie’s review.

Todd McKenney has some advice for all the other Peter Allens.
“Try not to impersonate him, but capture his energy and enthusiasm for being on the stage. And remember he wrote those songs about his life; the lyrics are the most important thing in singing a song,” he said.
Todd says he hopes there are more performances of The Boy From Oz scheduled for him soon. If he sprains an ankle there are lots of handy understudies around.