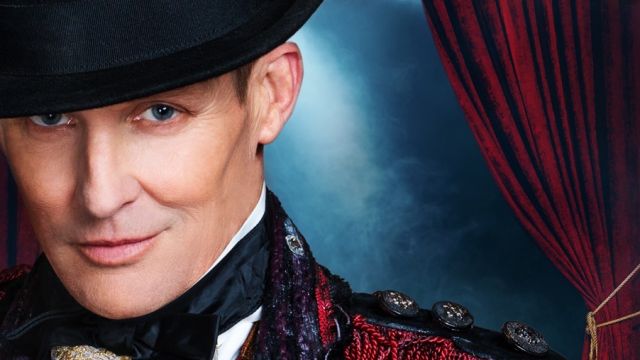 It’s Todd McKenney’s toughest challenge yet - singing whilst walking and keeping balance on a high wire. He’s been training for months for the role of the legendary circus showman P.T. Barnum in the musical Barnum, which has opened in Melbourne. Todd spoke with Stage Whispers about his passion for the role and the big balancing act.

Todd McKenney: It is the perfect timing because of the success of the movie The Greatest Showman starring Hugh Jackman. It has piqued everyone’s interest in P.T. Barnum as a person again.

Hugh, like me, has always wanted to play the role. He launched it in a cinematic way. This is the original Broadway musical.

SW: What is your connection to the musical?

TM: Mark Bramble, who wrote it, directed me in a production of 42nd Street in 1989. Mark said to me then, you should play Barnum one day. I just started in the business when Reg Livermore finished his (Australian) season of Barnum.  It has always sat in my psyche.

So I got the album and listened to every version there is. I thought it would pass me by. Recently I mentioned at a performance (of Bosom Buddies with Nancye Hayes) that it was the only musical on my bucket list. Then weeks later (I was booked). SW: How does the music and story of The Greatest Showman compare to Barnum?

TM: They are completely different. This is pure Broadway. The thing I like about him is that he is not a nice character. He is a charlatan. He sold old swamp land (hence the song ‘There Is A Sucker Born Every Minute’). Both are theatrical licences of the same story. The movie glorified Barnum a lot and touched on the darker stuff. The stage show does the same thing in a different style.

TM: Yes, I love roles that are the furthest away from me the better, whether it be the foppish British character in Anything Goes, the MC in Cabaret or Frank N Furter in The Rocky Horror Show.

He was the first person to charge people to come and look at other people. Whether it was Tom Thumb, who was just a little kid, or a bearded woman or the elephant man.  The bearded woman was just a woman with a beard stuck on her.

Barnum made the exit out the front door so the paying customers could never complain. They stood there saying, that is a woman with a beard stuck on her! He said, “doesn’t matter, got their money.” He did that with everyone.

General Tom Thumb was a six-year-old. He gave the kid a cigar and a bottle of brandy. So when people said that is a kid with a cigar (he replied) “doesn’t matter, get them out the door.”

SW: What surprised you in your research? SW: What sort of training are you undergoing to prepare for the tightrope scene?

To me it always stops the production, whilst we watch this guy do a trick. I said to (the director) Tyran Parke, and Mark Bramble, is there a way we can use the tightrope as a device to move the story forward? So we have come up with this plan to get Charity Barnum (his wife) to back me up.

Barnum brought out this Swedish singer Jenny Lind, who he had an affair with. She was an opera singer filling opera houses in Europe (and later in the US).  Charity, his wife, said you need to decide what you are doing?

In our version of it, when Charity is asking about it, she pushes him up on the tightrope. On the other side is the lady he is having an affair with. So Charity is standing on one end. I must sing somewhere out (in the middle) deciding whether I will go to the Swedish Nightingale or my wife? It will bring the house down.

Michael Crawford sometimes took three goes to get across. It is three metres (off the ground) – the highest you can go without a harness.

SW: You could still twist your ankle?

TM:  Yes, you could, and you have got your battery pack, and a spotlight and an audience and a song. The wire is as wide as my index finger.

SW: Are the skills you need to be a great tightrope walker and dancer similar? TM: They are. You have to know your core. It is all about balance. It is a weird sensation. You have got to be able to isolate your body, which you do in dance. When you throw your arms out you don’t fall over to the right or left. You must always know where your centre is.

As you walk onto the tightrope, the leg on the rope has to be slightly bent. But the pendulum foot has to be absolutely straight - otherwise you turn into a wobbly mess. Your arms have got to be relaxed. When you put the other foot forward you swap. That one has to be straight and the other bent. You are busy adjusting the whole time.

SW: And you are using different parts of your brain to sing and keep balance?

TM: And there is an audience. Then you are wearing battery packs. I also wear an inner ear monitor. I wear three battery packs (altogether) which add a couple of kilos. I have been rehearsing with a backpack to give me extra weight.  It is hard but I am looking forward to it.

Broadway musical Barnum returns to Australia in an all-new production at the Comedy Theatre, Melbourne, from April 27.

The new Australian production is produced by StoreyBoard Entertainment, in collaboration with the National Institute of Circus Arts (NICA).