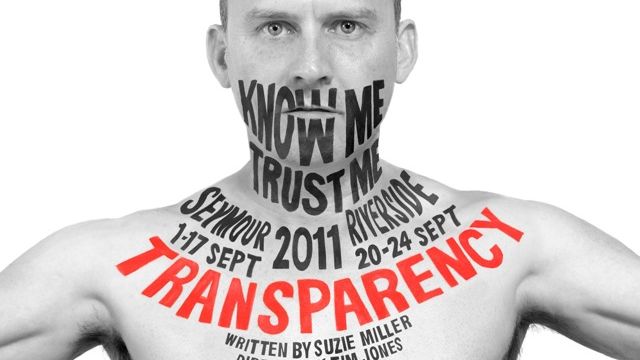 Transparency tells the story of Simon, a park ranger, who is trying to live a normal life under an assumed identity. When a local child goes missing and when his wife presses him for a child he breaks and reveals the terrible details of his past. Transparencyis about the need for truth, the need to be known and the need to reconcile past wrongs to build a positive future.

Miller was awarded the Kit Denton Fellowship for courageous writing for Transparency in 2008. The play was subsequently developed at Riverside Theatres and at the National Theatre in London. It premiered with Ransom (new writing) Theatre in Belfast in 2009, before touring Northern Ireland UK. Transparencywas then nominated by the Irish Times and other Irish newspapers as ‘best of’ 2009.

‘With my background as a children’s rights lawyer the questions are ones I have dealt with for years, and being able to portray these issues in an artistic context challenges an audience and provokes strong discussion about themes of the play, as well as about truth and honesty in relationships generally,’ Suzie Miller said.

At its core, Transparencyis more than an examination of the nature of rehabilitation, punishment and retribution. On another level it is about redemption - what we choose to tell in a relationship and what we choose not to tell; about the risks we take in confessing truth to those we love - and the trust we must have in them to continue loving us for who we really are.

Seymour’s Artistic Director, Tim Jones said; ‘since 2010 the Seymour has embarked on a new direction, actively curating our own performance programs including the new Reginald Season and regularly partnering major arts organisations like Belvoir, Performing Lines, Arts Projects Australia and Riverside Theatres. Transparency is a major step forward in this direction, creating a new production of this fine play by one of Australia’s most exciting female writers and which is bound to cause plenty of debate.’

Suzie Miller is one of Australia’s fastest rising female playwrights. In May 2011, SOLD was produced at theatre503 in London and she currently has other work in development for UK seasons. In 2008 her play Reasonable Doubt was produced at both the 2008 Edinburgh Fringe Festival and the 2008 NY Fringe Festival (winning the NY Festival’s Excellence Playwriting Award). Her works include: Cross Sections, 2004 Old Fitzroy Theatre, 2005 Sydney Opera House Studio, short listed for the Qld Premier's Literary Award 2004 and a 2005 AWGIE (Industry awards). SOLD was developed with Cicely Berry (Royal Shakespeare Company) and produced 2007 Old Fitzroy Theatre. It was shortlisted for the 2006 Rodney Seaborn award. All the Blood and All the Water was dramatruged under mentor Edward Albee, then produced by Riverside Theatre 2008. Suzie is a graduate of the Playwrights Studio at the Australian National Institute of Dramatic Arts (2000). She has a Masters degree in Theatre & Film, and a Masters degree in Law.

Win a pair of tickets to the opening night of Transparencyon Friday 2 September (5 pairs available).

The Challenge: Explain why you would like to seeTransparency.